Review: “Rent: Live” disappoints in performance that wasn’t even live 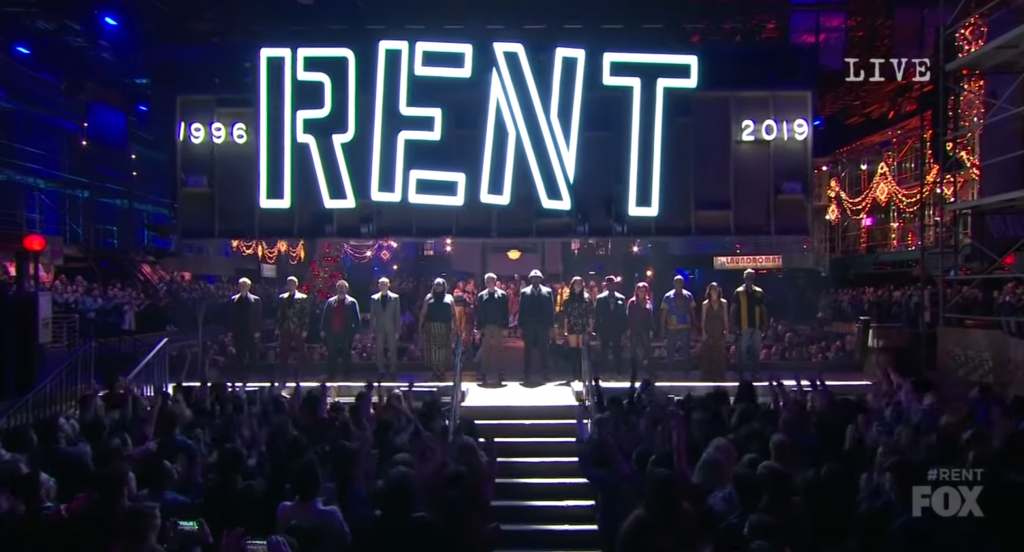 Although it huffed and puffed and tried its very hardest to blow away millions of viewers, Fox’s live adaptation of the musical Rent simply could not find its footing. The production had most of the right pieces — but mostly in the wrong places.

A heart-wrenching tale of love and loss and a poignant societal critique, Rent tells the story of a group of young adults in the 1990s pushing back against a society trying to eliminate them through gentrification and a failure to acknowledge the AIDS crisis.

Many Rent fans had already seen the Broadway adaptation or the 2005 film version; either way, it’s a high standards to live up to. The live version found itself in a predicament — if you’d seen previous versions, you found yourself underwhelmed at the new version compared to its predecessors, but if you were a new Rent viewer, the narrative was difficult to follow.

The live version’s main flaw was its hyper-focus on the vocals and choreography of the musical numbers, which came at the expense of telling a compelling story or creating characters the viewers could relate to. Even worse, an ankle injury to Brennin Hunt (Roger) in a Saturday rehearsal left him unable to perform most of the musical’s choreography.

Rather than resorting to using an understudy for Hunt, Fox opted to ditch the live concept almost completely, airing pre-recorded dress rehearsal footage with a fully mobile Hunt for the television audience. The only truly “live” moment was the final number, where the original Broadway cast of Rent joined the live cast — including a wheelchair-bound Hunt — to perform “Seasons of Love.” This defeats the purpose of a “live” screening almost entirely: The viewer is left with a subpar rendition of the hit show, lacking the quality of a television program and the pizzazz of an authentic live performance.

Arguably the cast standout, Vanessa Hudgens as Maureen, commanded the stage every time she graced it with her presence. Her show-stopping performance of “Over the Moon” exuded the comedy and quirk of Idina Menzel’s classic film portrayal of Maureen with the same vocal power and precision to hit some of the show’s most impressive notes.

Other standouts of the ensemble include Jordan Fisher as the ever-likable Mark and Tinashe as the ever-mischievous Mimi. Tinashe was able to simultaneously show Mimi’s promiscuity and vulnerability, from lacing her body provocatively in and out of the poles of the set in “Out Tonight” to sharing intimate moments with Hunt through the ups and downs of Mimi and Roger’s relationship. Fisher clearly did his homework to play Mark, as he had all the right traits from the admirable charisma to the on-point choreography. You missed him every time he wasn’t on-screen.

Kiersey Clemons and Brandon Victor Dixon each had their bright moments, whether it was Clemons’ duet with Fisher as Joanne in “Tango: Maureen” or Dixon’s mind-boggling vocals as Tom for “I’ll Cover You (Reprise).” But the pair struggled to hold audience interest for much of their screen time.

Another confusing aspect of the show — and perhaps the most frustrating — was the cheers from the audience, which frequently drowned out the vocals. Whether their reactions were planned or not, it seemed out of place for such a production.

Rent: Live not only missed the mark, but also failed to deliver what it promised. The musical numbers were big and flashy, and it’s clear that that’s what was rehearsed. Because of that, that aspect of the story and any hint of emotional relatability to the characters was then lost, leaving a disjointed, confusing performance in its place.