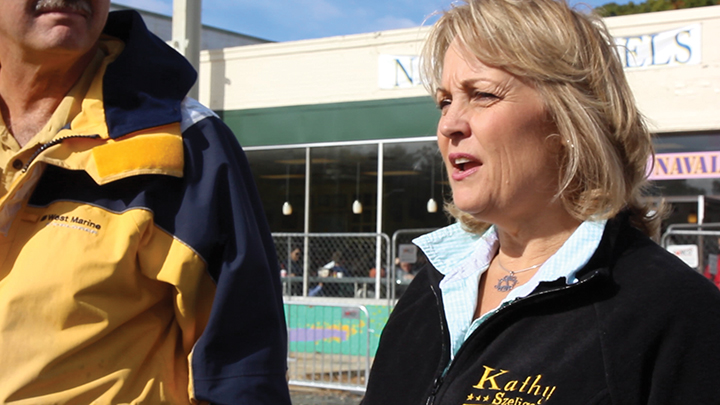 Kathy Szeliga stood in the parking lot outside Naval Bagels in Annapolis on Oct. 22, a windy Saturday. She had just finished rallying canvassers at a campaign event at Graul’s Market next door and had stopped at Naval’s to get a coffee.

Szeliga, the Republican minority whip in the Maryland House of Delegates and the party’s candidate for Democrat Barbara Mikulski’s vacant U.S. Senate seat, said she has one message for voters who are okay with how Washington currently functions: Don’t vote for her on Nov. 8.

“I’m a wife, a mom, a grandmom and a small business owner,” said Szeliga as she sipped her coffee. “I ran for office in 2010 for the Maryland House of Delegates because I realized that there weren’t enough small business owners in office, and it really makes a big difference.”

Thirty-one years ago, Szeliga started a small construction business with her husband, Mark, and at 32 years old graduated from Towson University with a degree in elementary education and teaching, after taking night classes and while raising her two sons. Now, as the Republican minority whip, she holds the second most powerful position in the House Republican party in the House of Delegates and is the second-most powerful woman Republican in this state.

Her platform is focused on reducing government spending, keeping college affordable for students, reforming the veteran affairs department and reducing the cost of health care. She has historically voted against tax increases and against gun control measures during her time in the House.

“I absolutely value the importance of a higher education, a college degree, but also working in construction I know that there are a lot of jobs out there that do not require a college degree,” Szeliga said.

Szeliga decided to run for the House of Delegates in 2010, and during her time in the house she served on the Veterans Caucus — a main tenet of her current campaign. She was then elected minority whip in 2013.

Her unique background as a business owner will bring diversity to the Senate, Szeliga said, noting that her opponent, Democractic Rep. Chris Van Hollen, is a career politician. Szeliga beat out Chris Chaffee in the Republican primary in April, taking 35.6 percent of the vote. Chaffee came in second with 13.7 percent.

“[Students should] think about what my grandmother told me: ‘What’s the definition of insanity? Doing the same thing over and over and expecting a different result,'” she said. “I would say that about Washington. If people are unhappy about Washington, they need to put new people there representing them.”

Democrats outnumber Republicans 2-1 in the state of Maryland, and an October poll by the University of Maryland and The Washington Post showed Van Hollen led Szeliga among likely voters 58 to 29 percent. However, there is currently a Republican majority in the Senate, with 54 Republican senators, 44 Democratic senators and two Independents.

The differences between the two candidates — Van Hollen, a Democrat from Kensington and Szeliga, a Republican from Baltimore — are stark, said Stella Rouse, director of the University of Maryland’s Center for American Politics and Citizenship.

“I just think Kathy Szeliga is much more of a conservative Republican in terms of her economic and social positions, whereas Van Hollen is a pretty liberal Democrat,” she said. “They’re much more on the opposite sides of the spectrum than even somebody like Larry Hogan, who has tried to sort of straddle the middle a little bit.”

And those differences between the two candidates are exactly what Szeliga is emphasizing in her campaign.

Szeliga said if she is elected to Congress, she plans to cut the things that affect the lives of everyday citizens — tolls, taxes and regulation — and to make her first priority in the Senate veterans issues, which she said have long been neglected.

“[There is a] moral obligation to care for the men and women who fight for our country,” Szeliga said. “If the federal government is not doing this most imperative, bipartisan action that they have a moral and fiscal obligation to do, what else are they not doing? What else is broken?”

Her plans also include combating the growing national debt by reducing government spending and taking the burden off of future generations.

“If politicians today do not get this under control, your generation is going to pay for it, and that is part of the reason that we’re running,” Szeliga said. “We’ve got to get the fiscal house of this government under control.”

Mark Plaster, a Republican from this state’s 3rd district who is running for a seat in the U.S. House of Representatives, said he agrees with Szeliga’s stances.

“Every time a politician tells you they’re going to give you something, what they’re really doing is saying they’re going to borrow from your future, and your children and your grandchildren, to pay for what you’re having now,” Plaster said.

Szeliga’s campaign as an everyday Maryland business woman is garnering support from Republicans across the state — including state Gov. Larry Hogan, who endorsed Szeliga this past July.

“She’s tough,” Hogan said outside an Annapolis restaurant She’s a fighter. She’s a businesswoman. She understands the issues of everyday Marylanders, and I believe she will make an outstanding U.S. senator. I believe she can win this race.”

Jacob Veitch, president of the this university’s College Republicans, said Szeliga’s background in the business world gives her a different perspective than someone traditionally in politics.

“She is a Republican, but works for Maryland,” Veitch said in a Sept. 1 interview. “… She’s looking at policies that are going to be most effective for everyone.”

If she secures the seat in November, Szeliga said she intends to take a two-year term limit.

“I want to go there, shake it up,” Szeliga said, “I do not want to be a career [politician] in Washington. Twelve years, get it done and get out.”