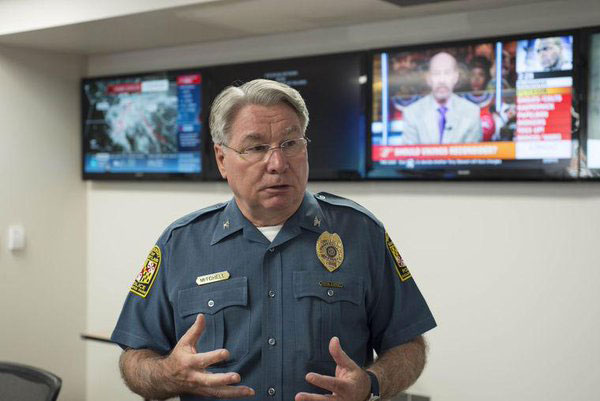 Three members of the SGA Police Advisory Review Council met with University of Maryland Police for the first time this semester March 3 in the Pocomoke Building to make police aware of student concerns and enhance student-police relations, said Ja’Nya Banks, director of the SGA Diversity and Inclusion Committee, which oversees PARC.

The council discussed several concerns prevalent among the student body, including uncertainty as to how police work with U.S. Immigrations and Customs Enforcement in the wake of President Trump’s orders to implement more aggressive immigration policies.

University Police told council members they do not work with ICE directly, and will only cooperate with ICE if they present a search warrant or subpoena, councilwoman LaRen Morton said.

The council also presented police with student reservations about how police handle cases of marijuana in on-campus residences. Police said the only time they get involved is if a student possesses more than 10 grams of marijuana, Morton said.

“There is a stigma that police officers are getting students in trouble,” said Morton, a junior psychology major. “Students need to understand that the Office of Student Conduct is responsible for providing punishment.”

Police provided the council with updates about diversity and implicit bias training — which University Police Chief David Mitchell implemented for all officers after he determined an incident in May 2016 — when police used pepper spray to break up a party consisting predominantly of African-Americans — could have been avoided.

The majority of police, including Mitchell, completed training as of last week, Morton said. Three officers who have not yet received training will complete the program by the end of this month.

The majority of police, including Mitchell, completed training as of last week, Morton said. A handful of officers who have already received training will attend “train the trainer” classes at the end of the month, which will enable them to conduct future trainings for three officers who have not yet received training. Officers who attend “train the trainer” classes will train new hires and the academy class as well, police spokeswoman Sgt. Rosanne Hoaas said.

“Clearly, today we recognize and agree that there is suspicion and mistrust about communities of color and other differences with regard to police,” Mitchell said. “To what extent that carries over to UMD is something we can talk about.”

Police detailed the various community events they participate in, such as last semester’s “Breaking Bread”, to interact more with the student community, Morton said. The Diversity and Inclusion Council hosted Breaking Bread with police in the fall — providing a forum for students to discuss community relations, body cameras, implicit bias and the Black Lives Matter movement with police.

Another Breaking Bread discussion is slated to take place in mid-March, Morton said.

This semester, University Police implemented a police academy so that university students, staff, faculty and other members of the College Park community could learn more about the department.

The SGA voted unanimously to create PARC in March 2015 due to concerns about police transparency. However, the council did not meet until more than a year later in April 2016. PARC did not fill its council positions until last semester. Council members have met together four times since PARC was established, and police have met with the council three times as of March 3, Banks said.

“As far as us not meeting, that was not ideal and we hoped to have met with officers as much as we could,” Morton said. “But I think PARC as a whole has been growing and figuring out what students really want to know, what they don’t know, and how we can help them.”

The police are always willing to work with the council and are open to meeting as often as possible, Morton said.

“We look forward to continuing meetings with PARC,” Mitchell said.

CORRECTION: A previous version of this story incorrectly stated that three University of Maryland Police officers who have not yet received diversity and implicit bias training would complete the program by the end of this month. A handful of officers who have already received the training will attend classes at the end of the month to enable them to conduct future trainings for the three officers. This story has been updated.