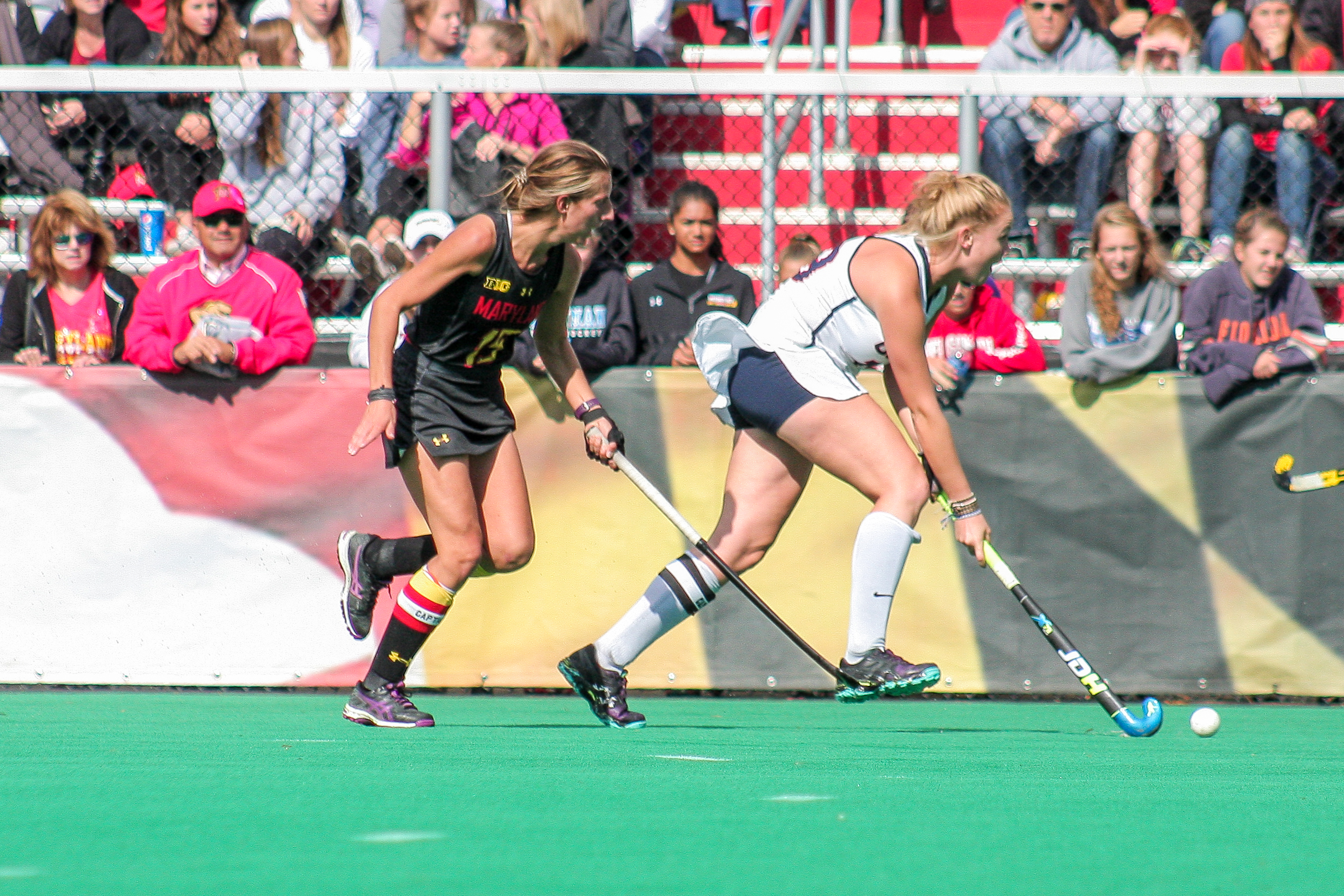 Forward Welma Luus prepares to take the ball away from an opponent in Maryland's 2-1 victory against Connecticut on Oct. 23, 2016. (Marquise McKine/The Diamondback)

When the Maryland field hockey team celebrates Senior Day on Saturday against Rutgers, it will recognize five Terps playing their final year of college field hockey.

Other than finality, the veterans’ careers have little in common.

“Very few of us came in in the same class,” senior Welma Luus said. “It’s an interesting group.”

For example, Luus, who began as a tennis player at Maryland in 2010 and joined the field hockey team as a junior, will be taking part in her third senior day with the program. Graduate transfer Grace Balsdon, meanwhile, will be recognized less than three months after she first arrived in College Park.

It’s a mix of people and careers that coach Missy Meharg is proud to have curated and says isn’t too unusual for her program.

Defenders Delaney Leathers and Courtney Deena are the only seniors who became Terps four years ago as part of the class of 2013, and their career paths are similar.

Leathers and Deena played as offensive weapons early in their tenures before moving to defense this year, when previous graduations made the backline an area of need.

Deena has played more in 2016 than she did in any other year, while an Achilles injury has kept Leathers — who started every game last season — off the field for much of the year.

When she is on the field against Rutgers, Leathers will likely be stationed closer to the midfield position she grew accustomed to in her first few years at Maryland. That’s where Meharg thinks she’s best utilized coming off the bench, while Deena and Balsdon will help shore up the backline.

Balsdon is finishing her lone season as a Terp, anchoring the team’s backline and providing 12 goals from drag flick penalty corners. The Canterbury Christ Church transfer has won the Big Ten Defensive Player of the Week honor three times this year.

Luus, meanwhile, has been at Maryland for seven years.

She’s celebrated four Senior Days — three with Meharg’s program and one with the Maryland tennis team — because the Terps didn’t know whether Luus would earn added years of eligibility as a graduate student in past seasons.

After four years on each team, though, this season is the final sendoff for the Pretoria, South Africa, native.

“The fact I’ve been here for six years says how I’ve enjoyed it. I’ve really fallen in love with Maryland,” Luus said. “I’ve just been really fortunate to have this experience.”

Emma Rissinger, a redshirt senior who’s been a fixture in the Terps starting lineup for the past two seasons, plays up front with Luus after her recruiting classmates graduated a season ago.

The group, though, is more focused on what the team will be working toward Saturday than the pregame ceremony and sentimental value of the game. Maryland has clinched a share of the Big Ten regular-season title but will have a chance to win it outright by defeating Rutgers.

“It’s fabulous to see them have such a successful senior year,” Meharg said. “They’re all so special and they’ve worked so darn hard.”