SGA appoints speaker, other positions at the first meeting of new session 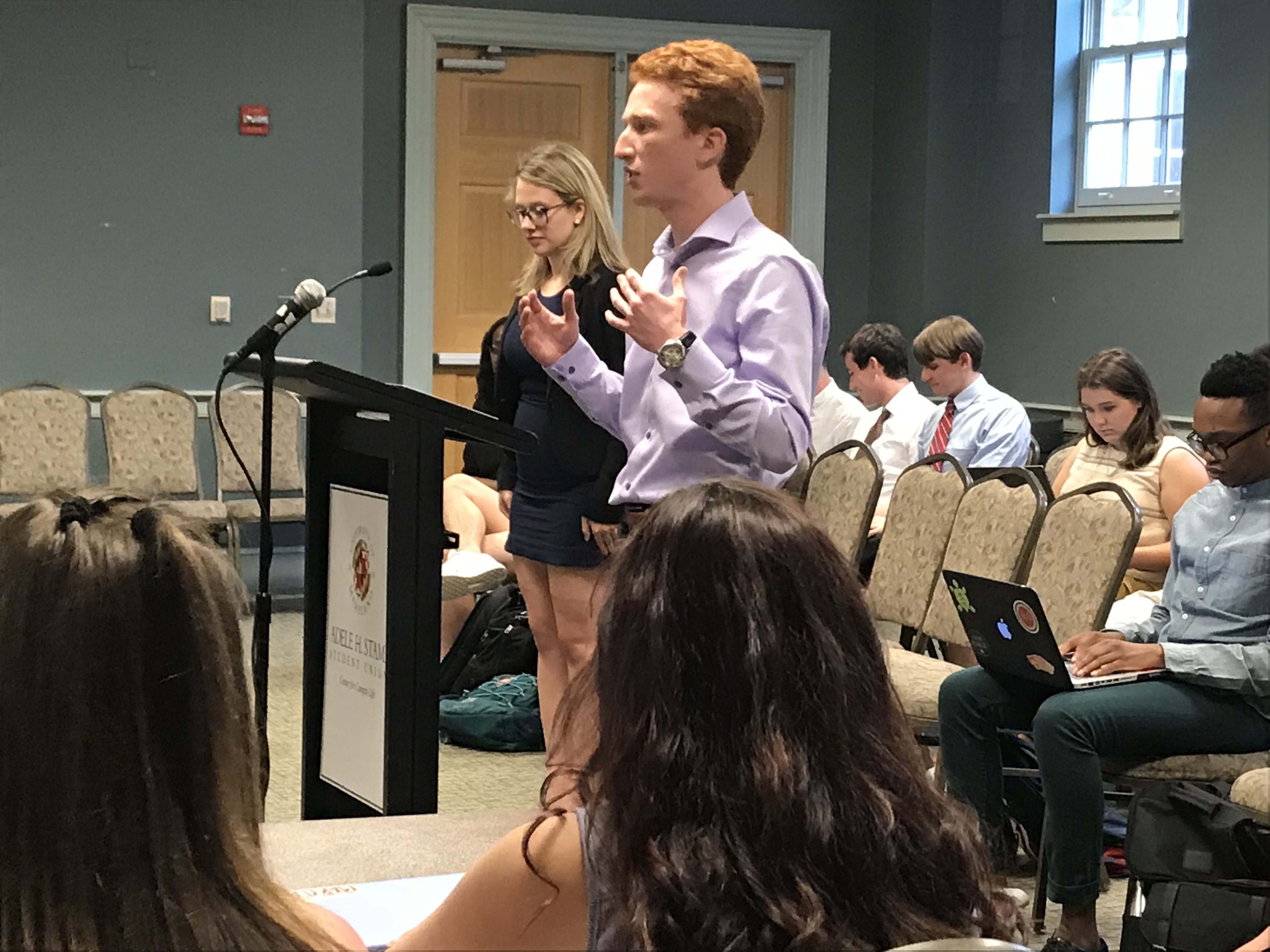 At the first meeting of the SGA’s new legislative session, the body selected its new leadership, filling a slew of positions and electing Noah Eckman as the new speaker of the legislature.

Eckman and Leah Barteldes were both nominated for the position. Eckman, a sophomore chemical engineering major, served as an engineering representative and the chair of the Student Facilities Fund, a subcommittee of the University Facilities Council, this year.

Eckman campaigned on his idea of replacing office hours with an online platform that would assign representatives to specific concerns as casework.

“I love [the] SGA, and want to see it grow and be healthy beyond my time here,” Eckman said. “I intend to lead an organization that actively seeks student feedback instead of one that hides in the office in the name of doing office hours. We have to evolve. Not once in my two years of doing office hours have I ever had a constituent come to my office hours.”

He said the Student Government Association social media account WTF UMD, or What To Fix UMD, would be instrumental in starting this process.

Barteldes, a junior government and politics and public policy major, served as a behavioral and social sciences representative and the speaker pro tempore this year. Her platform focused on her experience with parliamentary procedure and encouraging representatives to move their office hours to their respective constituencies.

To keep the election friendly, Chris Ricigliano, the acting speaker of the legislature, declined to release the numbers of the final vote.

Danny Cho, a member of the finance committee and a freshman film studies and finance major, noted that support for the candidates in the period of debate fell along gender lines.

“I noticed that everyone that [was] arguing for each speaker and debating for the speakers were of that speaker’s same gender,” Cho said. “It almost seemed like a boys vs. girls fight.”

Taylor Green, the newly appointed director of diversity and inclusion, also spoke up about the phenomenon, which she noted the former director of communications, Nisha Desai, recently wrote about in a guest column for The Diamondback.

“How can we honestly do our jobs if we ourselves aren’t as inclusive as we can be?” Green asked. “It’s probably not something you guys thought about, or even noticed, but it’s definitely something we need to work on.”

At the conclusion of the meeting, Eckman said he felt he was elected with the support of many male leaders on the SGA, and apologized for any harm that may have caused. He said he would be interested in organizing more mentorship structures for women in the SGA next year to solve the problem incrementally.

David Rekhtman, a freshman biochemistry and physiology and neurobiology major, and Chris Niccolini, a freshman government and politics major, also ran for this position.

Radhika Gholap, a freshman cellular biology and genetics and computer science major, was confirmed as the coordinator of recruitment and retention. She campaigned for the position without any opponents.

Jonathan Allen, the newly inaugurated SGA president, appointed sophomore letters and sciences student Jinwook Hwang as an off-campus neighboring legislator. In his introduction, Allen explained that Hwang had campaigned with Envision Maryland, but due to an error, was not listed on the ballot. Allen said Hwang would have run uncontested.

The finance committee will be starting next year with six members, and Stover will then have the opportunity to appoint more members.

The committee oversees a portion of the student activities fee and allocates funds to student groups based on their applications, memberships and budget requests.

It was also the night to appoint the new session’s directors, some of whom will head next year’s SGA committees.

Allen has said the director of alumni relations and tradition will be uniquely important in 2019, when the SGA will be celebrating its 100th year and striving to forge new bonds with SGA alumni. The position was renamed to include alumni relations at the association’s omnibus meeting last week.

CORRECTION: Due to a reporting error, a previous version of this article incorrectly stated that Radhika Gholap was elected to serve as parliamentarian. She was elected to be the coordinator of recruitment and retention. This article has been updated.