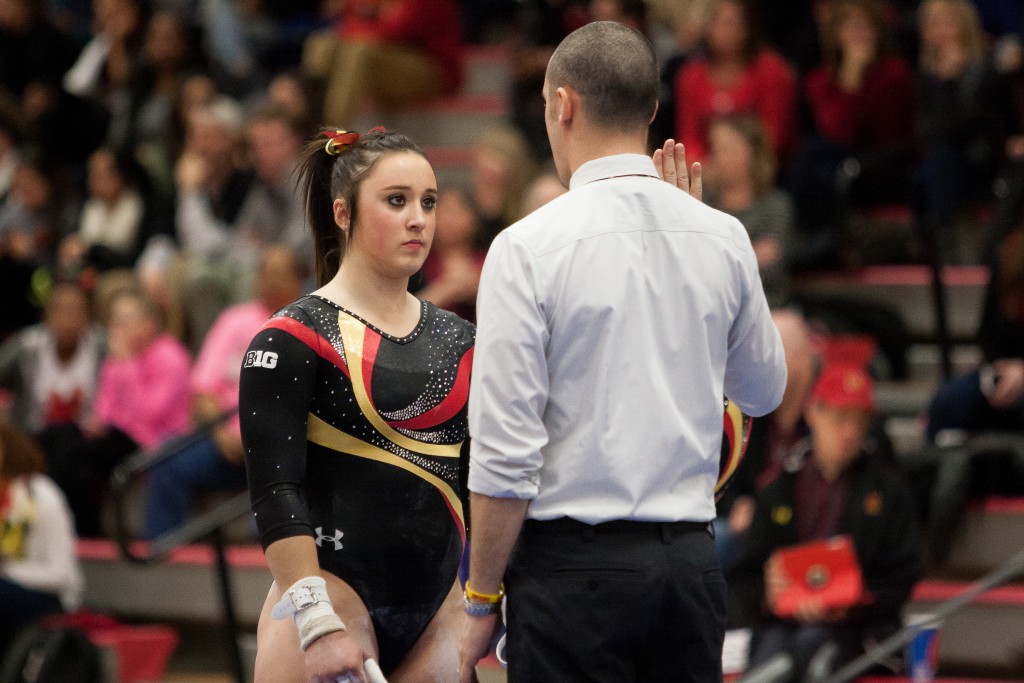 The Maryland gymnastics team arrived at the Big Five Meet in Illinois last Saturday having recorded at least 195 points in seven consecutive meets. During that nearly four-week span, the Terps vaulted from No. 44 to No. 32 in the national rankings.

But after a 10-day hiatus from their last meet, some of the gymnasts were hesitant when they returned to action for the Big Five Meet. It was Maryland’s longest gap between meets since last January, when they went almost two weeks without a competition. The Terps finished last with a 193.375.

The rest “was a good thing for our bodies,” freshman Alecia Farina said. “But we were on a really good roll, and I don’t know if that had something to do with it.”

Farina said she felt the Terps weren’t “out of meet shape,” but their mindsets may have been affected by the time away from competition.

“Over the previous seven meets, our mindset was all about ‘How close to perfection can we be?'” Nelligan said. “For a brief second, I thought they lost that this weekend and instead they were worried about not making a mistake.”

“It was frustrating,” Nelligan added, “but if we can make something positive out of it, then it was worth it.”

In an effort to keep Maryland in its groove, Nelligan coordinated a mock meet at practice the weekend before the Big Five Meet. The Terps performed all four events in the same sequence and with the same lineups they would in competition. The coach was pleased with how the Terps fared in the trial meet, but noted an actual meet is difficult to replicate.

Nelligan acknowledged the time away from competition may have disrupted Maryland’s rhythm, but did not directly attribute that to the Terps’ performance.

“It’s a whole different ballgame when you get to a meet,” senior Sarah Faller said. “The mock meet did help, but there’s nothing like competing and having those meet jitters and nerves. It can be [humbling]. I want to make sure we use it to make ourselves better.”