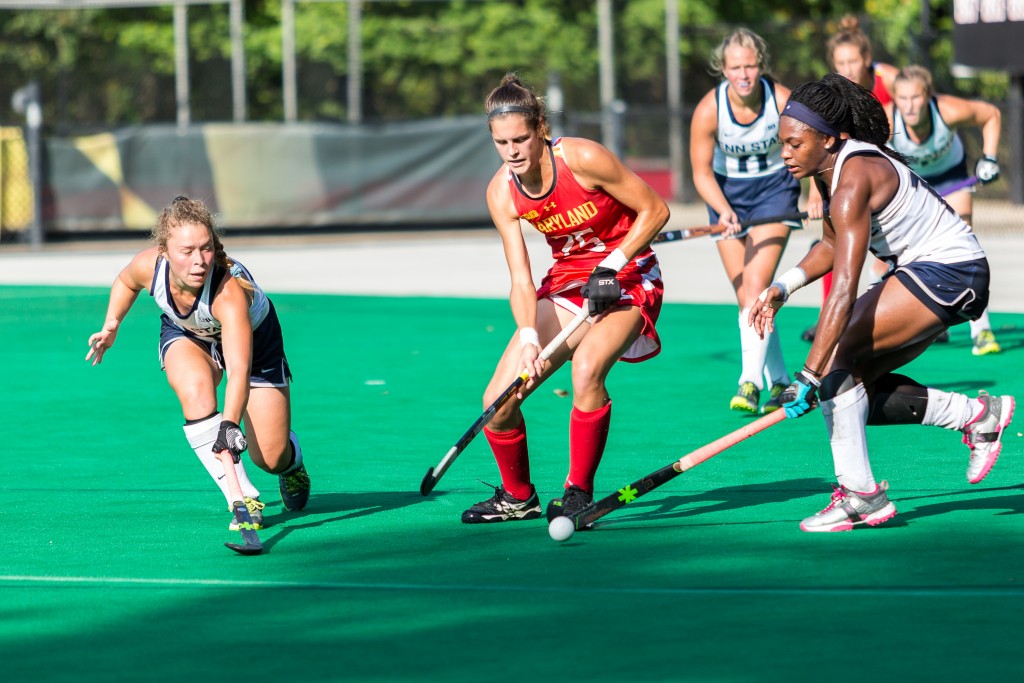 At times, field hockey can develop a small-world feel among the college community. In her 31st year as Maryland’s coach, Missy Meharg frequently faces former assistant coaches or players who are now on opposing staffs.

But when Delaware comes to town on Saturday, two Maryland players will line up opposite familiar faces.

Terps forward Sabrina Rhodes and defender Sophie Giezeman will play against their sisters — Delaware goalkeeper Sydney Rhodes and forward Lisa Giezeman. The matchup adds an extra element to the Blue Hens’ trip to College Park this weekend for the Terrapin Invitational.

“I’m really excited because we’ve been playing together since we were little,” Sabrina Rhodes said. “We’ve gotten to play against each other only a couple of times now. … We both are just really competitive, obviously, so it should be a good game.”

Sabrina and Sydney Rhodes, who are twins, have played on club and school teams together their whole lives. They adopted different positions in field hockey so they wouldn’t have to compete for the same role, Sabrina said.

Sabrina started her college career playing with her sister at Delaware, but in 2017 she transferred to Maryland in search of a better fit.

The Giezeman sisters, who are from the Netherlands, are used to competing. Growing up, Sophie played for the Dutch under-16 and under-18 national teams and a club team, and she often faced her sister in scrimmages.

Last year, Maryland and Delaware met for a preseason exhibition match, but Saturday will be the first time the pair of sisters will face each other in the regular season.

Sophie said she became interested in field hockey because of her older sister, whom she looked up to. Growing up, they frequently played together in their backyard.

“She was the younger one, so she always looked up to me,” Lisa said. “But for me, she was such a good player, she had so much talent I kind of looked up to her, so it went both ways.”

Then, when Lisa traveled to the United States to play college field hockey, Sophie became interested in following in her sister’s footsteps.

“I heard stories from her, how competitive it is also in the U.S., and I like very competitive games,” Sophie said. “She just said to me, ‘If you want to look at a university, I would look at Maryland because I think it fits you best.'”

Now, they call each other after every game to analyze what went well and how they can improve.

As kids, Sydney played goalkeeper and Sabrina played forward, which offered a natural practice pairing. In high school, Sydney would often defend the net as Sabrina took shots on her.

So when the pair of sisters meet on Saturday, there will be an added motivation for the matchup.

“We’re at a place where we’re really competitive — we don’t want to be beat by our sisters, of course,” Lisa said. “And especially I’m the older one, so I don’t want my sister to win. … For me, I just don’t want her to beat me.”