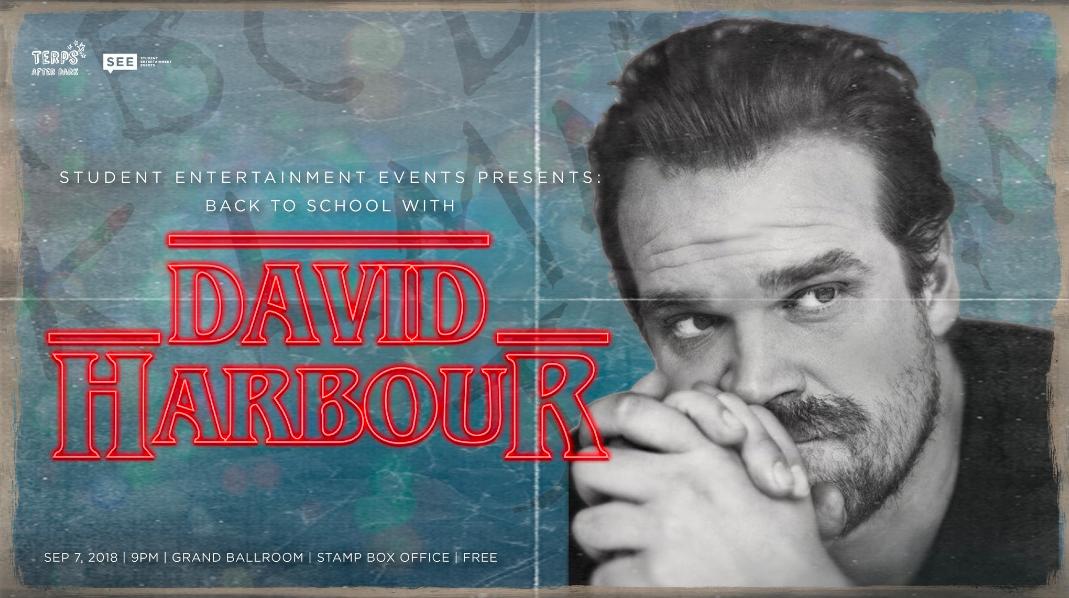 A few years ago, David Harbour was having a professional dry spell — he hadn’t worked as an actor for five months. He was considering giving up on acting altogether, until he received a script for a show called Stranger Things.

After reading the script and falling in love with the character of police chief Jim Hopper, he decided to audition. And to his surprise, as he told a room packed with University of Maryland students on Friday night, he got the part.

Since the show premiered on Netflix in the summer of 2016, Harbour’s life has changed dramatically. For his role as Hopper, he has been nominated for a Golden Globe, two Emmys and three SAG Awards, and he won the 2018 Critics’ Choice Award for Best Supporting Actor in a Drama Series.

As soon as Harbour walked into Stamp Student Union’s Grand Ballroom, he was energetic and looked genuinely excited to be speaking. He joked around the entire show and was an engaging storyteller. The audience erupted in laughter over some of the anecdotes and stories he told about the cast.

Harbour said that as a young kid and during college, everyone told him he wouldn’t make it as an actor. Despite this, he continued to follow his dream and encouraged the audience to follow their dreams as well.

“If you really want to the pursue the arts … you might not end up on Stranger Things … but it’s a very fulfilling life,” Harbour said. “If you want to do it, you should, no matter what anyone else tells you.”

Harbour had a lot of input on Hopper’s character during production. The whole cast — including the kids — shaped the characters and made them their own.

When asked what it’s like working with such a young cast, Harbour responded, “Remember when you guys were 14? Remember how annoying you were?”

After the audience finished laughing, Harbour admitted it can be weird working with kids. They’re hyper, energetic and sometimes impatient, but also really excited to be there. No other coworkers have asked him, “Can I get a hug, man?” after filming a good scene, Harbour said.

The cast doesn’t hang out much outside work, even though they’re all close friends, Harbour said. Working in the show is very intimate, so when the cast is together, it makes the atmosphere special.

Harbour didn’t give many hints about season three of Stranger Things, but he did say it takes place almost a year later in the summertime and has a warmer feeling to it. There’s still the base story — a monster to deal with — but the directors are starting to explore the more fun aspects of Hawkins.

Harbour said these scripts are the best he has read of the show.