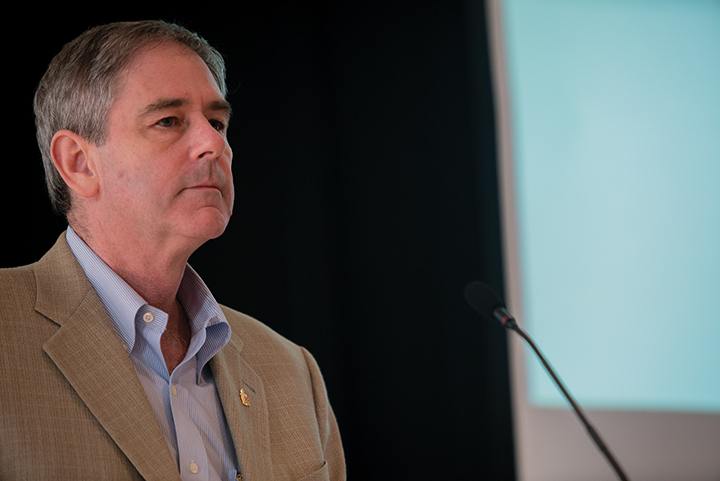 The Senate Executive Committee voted on Monday to move a proposal for a new academic program in the business school forward next month to the University Senate, and discussed a change in restricted research guidelines as well as a proposal to alter the wording of documents that reference the honor pledge.

The first proposal would create an online version of the master’s degree program in business analytics for the business school. The entire 30 credits would have to be completed through online courses. This program would have the same course requirements as the existing master’s degree program in business analytics, which was approved by the University Senate last year, besides the online component. The SEC unanimously agreed to put this proposal on the agenda for a full body vote at the University Senate meeting on Feb. 9.

The program, if approved by the senate, would be offered in 10-week terms four times during the year. The proposal was put together partly due to the success of the online version of the masters of business administration program in the business school.

“For the past 10 years business analytics and data science have grown exponentially with the availability of computing power and data,” Harris said. “Likewise, there has been a growth in demand from industry professionals with skills related to business analytics.”

Harris said the business school expects there to be about 75 students in the program the first year, but in upcoming years, the number is expected to jump to around 250. The program would also hire two new tenure-track faculty.

The program would include synchronous online classes — meaning students can participate in real-time online — as well as asynchronous interaction, where students would partake in the online class assignments at their convenience, Harris said. Faculty will be trained on how to operate the technology used for this program, if approved.

The SEC also discussed a proposal by the Educational Affairs Committee concerning the student honor pledge. The committee proposed that corrections be made to the university documents referencing the honor pledge because many of them don’t express that the pledge is optional, and that not signing it doesn’t exempt you from cheating punishments.

Educational Affairs Committee research, which included informal surveys of students and faculty, found there is widespread misunderstanding when it comes to the pledge, said Bryan Eichhorn, chairman of the Educational Affairs Committee. He added his committee found outdated and confusing language in the Code of Academic Integrity that might cause people to misinterpret it.

The SEC voted to have the Student Conduct Committee review the entire pledge, and the proposal will also be brought up as an informational item on the senate floor during a Feb. 9 meeting.

The SEC also moved forward a proposal on restricted research guidelines, which will also come to a vote at the Feb. 9 senate meeting. The proposal aims to create guidelines and procedures for anyone who wants to do restricted research at this university, Executive Secretary and Director of the University Senate Reka Montfort said.

“There is already a system policy that says we don’t allow restricted research because it doesn’t allow anyone to publish their research openly, but there are in extreme cases exceptions that can be made,” Montfort said. “However, there is no clear guidance on that and this proposal will clarify those guidelines.”

Use of visiting faculty titles for professional track faculty appointments also moved forward to the senate and encompasses a change to promotions, appointment and tenure policy.