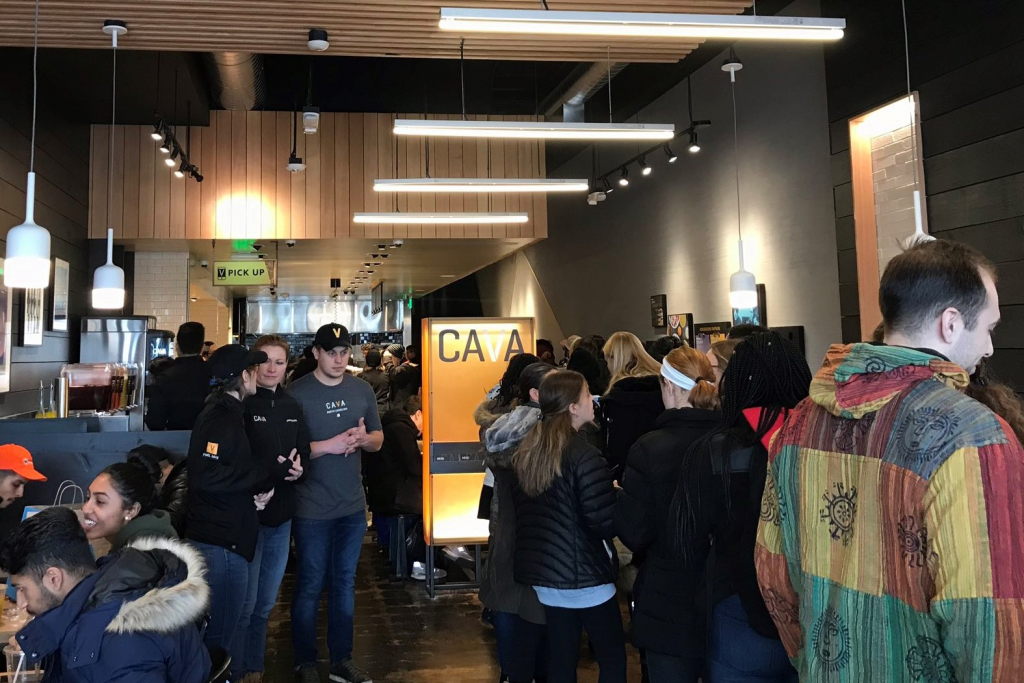 More than 150 people waited in line for the opening of Cava on Route 1 Nov. 30. (Hannah Himes/For The Diamondback)

Scores of people lined up in the cold on Friday for the long-awaited official opening of Cava, a fast-casual Mediterranean restaurant.

As attendees waited in front of College Park’s newest restaurant, Testudo hoisted a Cava flag and gave high-fives to patrons to the sound of University of Maryland’s traveling marching band, which was accompanied by members of the school’s dance team.

“We’re so excited,” said regional brand manager Jess Carlin. “We’re super grateful that the community came out to dine at the restaurant.”

Cava takes RadioShack’s former spot in the College Park Shopping Center, wedged between Jason’s Deli and an empty site that was formerly The University Shop.

Following its soft opening Thursday, the restaurant kicked off its official opening at 10:45 a.m. by offering free meals to the first 150 people in line, which stretched out of the shopping center and onto Knox Road. That was exactly what Tyler Ziegler came for.

“I’m good for free anything,” said Ziegler, a senior government and politics and germanic studies major.

A Cava first-timer, Ziegler said he was excited to eat the “Mediterranean version of Chipotle,” even if he didn’t know exactly what he wanted to order. The chain is “100 percent” something College Park needed, he added.

“It’s just something different,” he said.

The College Park area is home to a plethora of pizza places — including Lotsa Stone-Fired Pizza, MOD Pizza, Paisano’s Pizza, Blaze Pizza, Pizza Kingdom, Potomac Pizza and Pizza Boli’s, as well as several national chains — but Mediterranean options in the area are scarce. While Marathon Deli and Food Factory remain open, Kapnos Taverna, a Greek-inspired restaurant located under The Hotel, is closing Dec. 1.

Even though Cava had delays — initial flyers said the restaurant would open in the summer — senior computer science major Andrew Bian said he wasn’t fazed by them. He didn’t expect Cava to open until after winter break, anyway.

A Cava spokesperson said in September that its opening was delayed because the inside of the building had to be totally redone, since the previous occupant wasn’t a restaurant.

Lauren Noble, a senior accounting and finance major, said the opening date wasn’t ideal with winter break coming up, but she noted that people can still go next semester.

Noble said she’s been to Cava in Silver Spring before, one of the restaurant’s 10 locations in Maryland. She didn’t even need a menu to know she was ordering a brown rice bowl with beef meatballs, roasted red pepper hummus, tzatziki and the restaurant’s custom “crazy feta” spread — plus all the free toppings she could pile on.

“Cava’s really, really good,” Noble said. “I think bringing in more restaurants or retail would bring the town of College Park up, both economically and also bring more students in and help the surrounding local community.”

Chelton agreed that the franchise’s interest was a “good sign” for the city.

“There’s been a lot of excitement about the new Cava coming,” he said. “I think it’s great that a franchise like that is interested in College Park.”

Sakina Naqvi, a junior elementary education major, got her free Cava meal about a half-hour after the opening began. She said she was “super excited” — for the free food and the high-fives from Testudo, and also because she doesn’t see a lot of Mediterranean restaurants in the city.

“Just to see the diversity in here and all of them coming out to this Mediterranean cuisine,” she said. “I’m like ‘Oh, OK, that’s amazing.’”