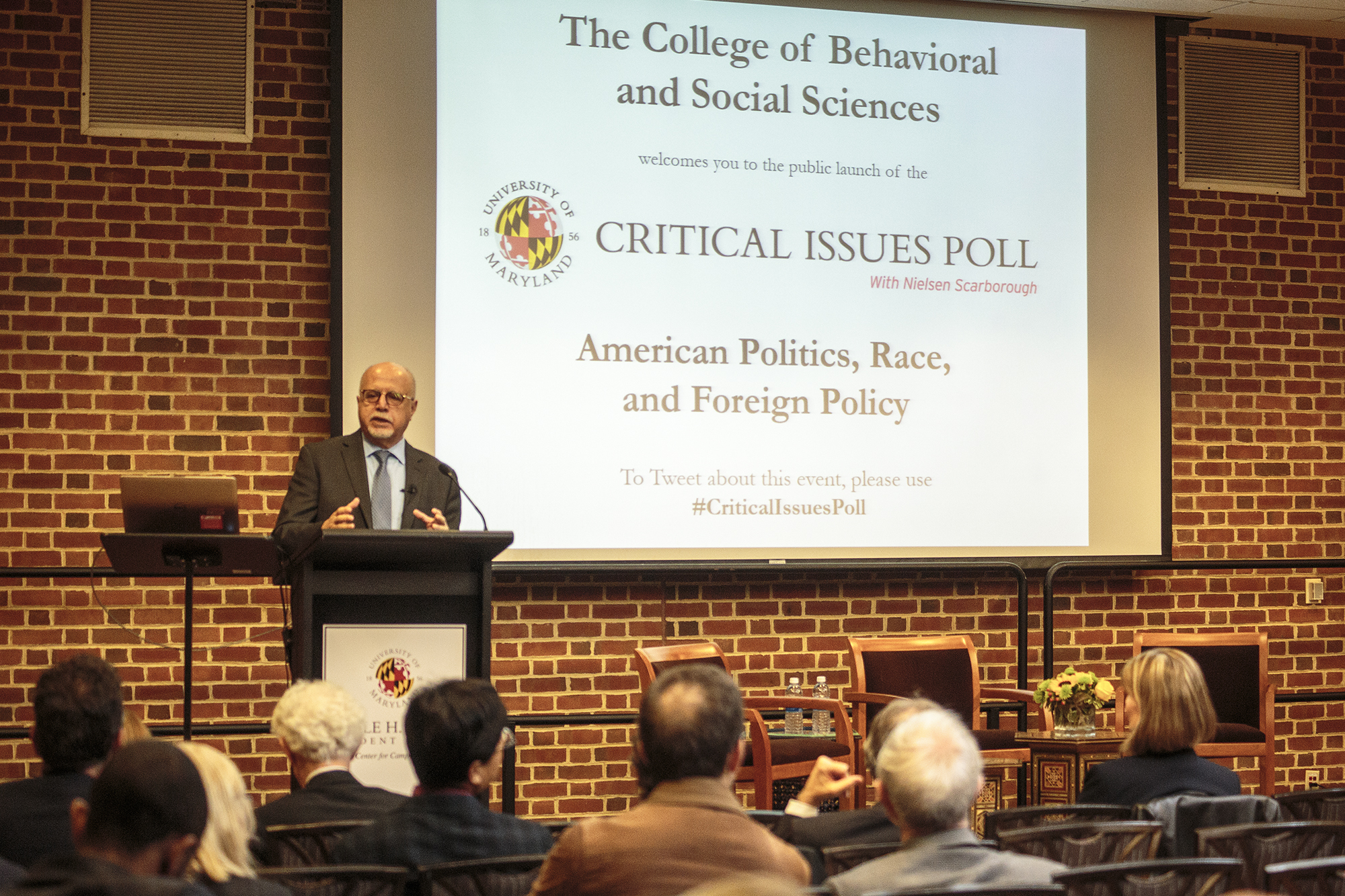 A University of Maryland Critical Issues Poll set out to find what Americans are thinking prior to the 2016 presidential election.

The answer: a lot.

The results of the poll were revealed Tuesday during the launch of the University of Maryland Critical Issues Poll program, which will “meld together attitudes and opinions about foreign policy and American policy,” said the center’s associate director Stella Rouse.

This is the first major poll conducted by the center, said the program’s director Shibley Telhami. The program will conduct two major polls and four minor polls a year.

The initiative, proposed last year, is sponsored by the behavioral and social sciences college and is partnered with the Anwar Sadat Chair for Peace and Development and the Center for American Politics and Citizenship. They also work with Nielson Scarborough, one of the top polling firms in the country, said the college’s dean Gregory Ball.

“We can all agree that this is a time when illumination is more necessary than ever,” Ball said.

About 60 people attended the launch held in the Prince George’s Room at Stamp Student Union.

The results showed that 78 percent of all voters want a significant change in the American political system. Based on the results of several questions asked, the poll revealed Donald Trump is seen as more of a change agent than Hillary Clinton, though the people polled are unsure if that change is for better or for worse.

The results of the poll also found that the reasons people are voting in this election is not just because they agree with their chosen candidate’s policies. Often, it’s to vote against the other candidate.

“Breaking down the type of change that we are looking for in this election” could be used to explain who is voting for whom and why, Rouse said.

Telhami and Rouse were joined by William Galston, the Ezra K. Zilkha Chair in Governance Studies at the Brookings Institution, in discussing the poll results.

Rouse said because of “how things quickly have changed in this election cycle … almost hour to hour … what we’re capturing is a snapshot and may not necessarily be exactly what’s going on today.”

Several topics stuck out in the poll, said Galston, a columnist for The Wall Street Journal.

Telhami also discussed poll results that delved into foreign policy issues. He said the American people are divided on the correct level of military and governmental involvement in Syria, and 73 percent of people polled said ISIS is the strongest threat to national security. The center is now looking ahead to conducting a poll after the election, as well as several more in the spring, Telhami said.

Telhami said he is looking to “make [the polling center] available … for free on a competitive basis,” for graduate students by allowing them to submit questions approved by their supervisors.

“Our idea is not only to do our own research on critical issues and obviously put that into a public discourse … but also trying to draw graduate students into the research of public opinion,” Telhami said. “We’re hoping as we get more and more established to start getting students more and more involved.”

Yasser Nsheny, a political consultant for the Embassy of Egypt who attended the event, said his country’s embassy is closely following the election.

“We are interested to know why the people are voting [for] each candidate,” he said, “and what the results mean for the future.”