“Everything we do is for the community”: Female UMD students discuss activist leadership 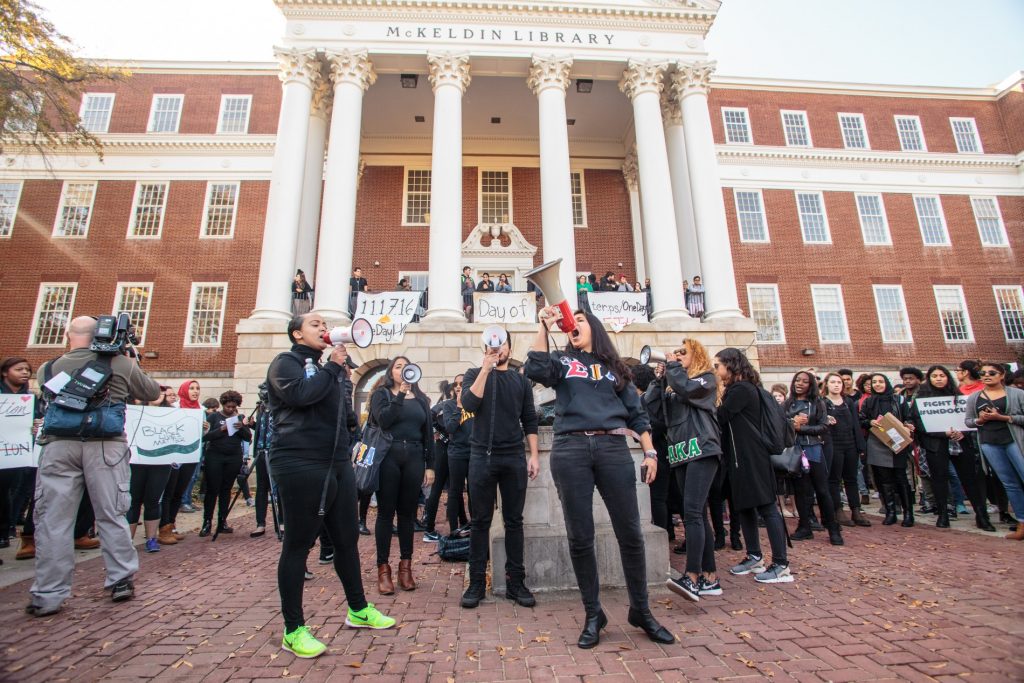 By Kimberly Escobar and Naomi Grant

Erica Puentes, the former Political Latinxs United for Movement and Action in Society president, started her activism career to work on a cause that was personal.

When the Baltimore City Public School System was going to cut funding for Ingenuity programs at four schools and International Baccalaureate programs at two high schools in 2014, she decided to do something about it, even though she had no experience as an activist. Puentes wrote letters, held a rally and called her friends to help.

“Those two programs and those two high schools were honestly the only lifeline[s] students of color in Baltimore have to get to college,” the senior African-American studies major said. “I recognized that the only reason I was in college were because of the opportunities that those programs had opened towards me.”

At the University of Maryland, various female activists have led the majority of the campus’ rallies and protests this semester, such as the Nov. 17 walkout and the post-election rally in front of McKeldin Library.

Though men tend to rate themselves as more effective leaders than women rate themselves, when others’ ratings were taken into account, women came out ahead on perceived effectiveness, according to a 2014 study published in the American Psychological Association’s Journal of Applied Psychology.

“Women are typically described and expected to be more communal, relations-oriented and nurturing … whereas men are believed and expected to be more agentic, assertive and independent than women,” wrote lead researcher Samantha C. Paustian-Underdahl of Florida International University and her colleagues. “As organizations have become fast-paced, globalized environments, some organizational scholars have proposed that a more feminine style of leadership is needed to emphasize the participative and open communication needed for success.”

That style of leadership is what Black Student Union president Bria Sladden aims for. She said she’s most proud of her team and its dynamic, and she has one-on-one phone calls with her board members to hear about their plans for the semester and ensure they understand what their position entails in order to help them be most effective.

“I just really wanted to facilitate a culture within the organization that requested more feedback from our members … since everything we do is for the community,” the senior finance major said.

Other female leaders on the campus cited different reasons for deciding to get involved at a higher level. Lauryn Froneberger, president of this university’s NAACP chapter, said when she set foot on the campus her freshman year, seeing the same people step up on several occasions inspired her to learn leadership skills. She later enrolled in the leadership studies minor, a program that shesaid allows for “a lot of self-exploration, and you start to really realize that anybody can be a leader if they work toward it.”

“If people consistently see the same people in the spotlight, it discourages them in a way,” said Froneberger, a senior journalism major. “People would start to think, ‘I’m not charismatic, I don’t have these character traits, I’m not extroverted,’ about themselves, and that really discourages people from wanting to step up.”

For Community Roots President Dani Gillis, one thing that stood out to her about the club was the fact that it’s a multicultural organization that doesn’t focus on one demographic.

“I want to not only fight for my own rights, but also fight for the rights of my classmates, my peers, the people around me that I care about that don’t always have the same issues,” said Gillis, a senior English and journalism major. “It speaks in even more volumes when you’re standing in solidarity with somebody and the outcome doesn’t even directly affect you. … If I’m rising up, but I’m leaving people behind, am I really rising up?”

Asian American Student Union President Amanpreet Kaur said having a “bond of sisterhood” with female leaders of other student organizations has helped accomplish more, especially after the 2016 presidential election.

Leaders such as Kaur are working to make sure that the communities they are trying to reach are well-represented under their leadership.

“I definitely feel that there is a lot of responsibility,” Kaur said. “Not only are you leading your [executive board], but you’re also representing the organization to the community.”

Sara Carter began heading MaryPIRG this fall, even though she wasn’t supposed to. Carter, a junior government and politics major, joined MaryPIRG in fall 2015, and in the spring she became the coordinator of the organization’s democracy campaign. By the end of the spring semester, she was elected MaryPIRG’s vice president, though at the time she hadn’t considered being president until her senior year.

When then-MaryPIRG President Andrea Holtermann left school this fall to work for former Democratic presidential nominee Hillary Clinton’s campaign, Carter had to step up from her role as vice president and take the lead. Before Carter joined MaryPIRG her sophomore year, she’d been involved with service organizations, but never advocacy organizations.

But she wanted to challenge herself.

“Every step is a challenge, and every step, you feel a bit uncomfortable,” Carter said, citing words from her boss as inspiration. “You should never feel like you know what you’re doing, because that’s how you know that you’re really pushing yourself.”