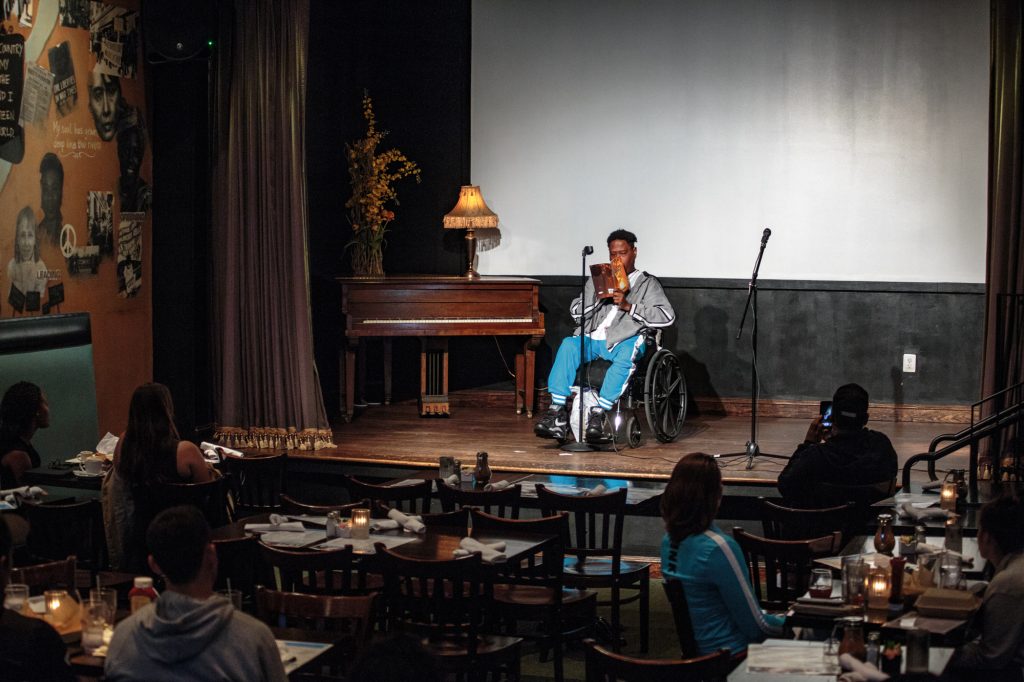 Senior Pegah Maleki took the stage at Busboys and Poets Thursday night to read a poem.

“When I first told a friend I was assaulted,” Maleki read, “She said, ‘Don’t women who are sexually assaulted usually become sluts afterwards?'”

About 25 people gathered at the Hyattsville restaurant for “Survivor Monologues,” which focused on sexual violence and advocacy. The Rawlings Undergraduate Leadership Fellows Program, SEX Week at UMD and the UMD Help Center hosted the event.

“I’m here mainly as an advocate…to come share my story and take a break from social justice movements,” said Maleki, an English major. “It’s nice to get back into the creative vibe since I knew it would be like a smaller thing and wanted to challenge myself a little by sharing my story.”

Senior Christopher Frye, a Rawlings Undergraduate Leadership program member who helped host the event, said he wanted to hold it for a long time because of how passionate he is about issues such as sexual violence and racism.

“I heard that Busboys and Poets has a space for community poets, and I thought it would be interesting because this could be a way that the speakers and listeners can learn from each other in a therapeutic way,” said Frye, an environmental science and policy major.

District 19 delegate Marice Morales of Montgomery County, who attended the event, said she has been working on legislation to put combatting sexual violence at the forefront of the conversation of sexual violence on college campuses.

“Dealing with the higher end of an organization … I cannot tell you how many times I have had folks come into my office and try to fool me out of legislating on the issue of sexual assaults on campus,” Morales said.

Sexual violence is defined as “a sexual act committed against someone without that person’s freely given consent,” according to the Centers for Disease Control and Prevention. It’s widespread, especially on colleges campuses; a September 2015 CNN article stated 23 percent of college students say they have been sexually assaulted in college.

Junior Amber Ebanks, a multiplatform journalism major, came to the monologues to raise more awareness of sexual assault on the University of Maryland campus, she said.

Because of the lack of talk on college campuses about sexual violence, Ebanks added that even something small like this event helps people understand who exactly can be affected by it.

“Sexual assault is something that affects all races, classes, and genders,” said Ebanks, who is the director of this university’s Vagina Monologues.

This university has been making strides to address the growing issue of sexual assault. It expelled a record three students during the 2014-15 school year, according to a November Diamondback article.

The Survivor Monologues offered an opportunity for discussion on particular areas of sexual violence as well. Arianna Rivera, a program coordinator for the Maryland Coalition Against Sexual Assault, said events like these are important in highlighting how oversexualized women of color can be, for example.

“Women of color are oversexualized, which leads to a society who views themselves as responsible for the sexual violence that they experience,” Rivera said.

Senior bioengineering major Erika Klatt said she didn’t know what to expect or feel coming into the event.

“I came in not really knowing what to expect … It was powerful and emotional. … A nice sense of community,” Klatt said. “People don’t understand that it can happen to them or to someone close to them.”

Poet Teron McRae, a local from the Washington metropolitan area, shared a poem from his book McRae on Display, titled, “When a Woman Says No.”

Sophomore psychology major Meghan Noonan said she thought it was nice to have a safe place for people to discuss sexual violence and share their stories.

“It’s therapeutic,” Noonan said. “It’s nice to be in a place where people can be understanding.”