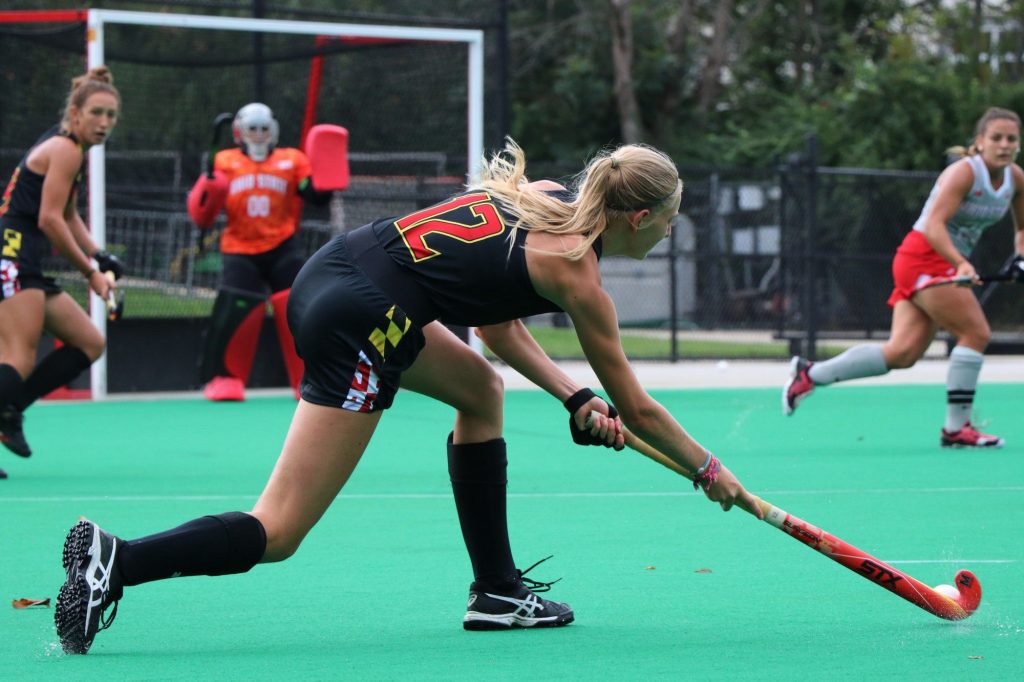 Maryland field hockey midfielder Kelee Lepage gave forward Bibi Donraadt the ball on the right side of the net with time winding down Friday. Donraadt didn’t hesitate for a second, quickly scooping the ball past Northwestern’s goalkeeper into the net to give the Terps a one-goal lead.

Donraadt’s score broke a deadlock that had lasted almost 50 minutes, and the Terps only had to hold on for three more to clinch at least a share of the Big Ten regular season championship. Yet in those dying moments, the Wildcats pressed hard, earning two penalty corners and taking four shots.

The Maryland defense was up to the task, with goalkeeper Sarah Holliday making one save and the defenders in front of her blocking two efforts until the final buzzer mercifully sounded and the Terps could finally breathe easy, owners of a 2-1 win and their fourth conference title since joining the Big Ten.

“I was so excited, it was not about the title, it was just like about winning, being with the whole team in our last game for now on this field,” Donraadt said. “I was so excited and so pumped up … it felt so good.”

Should Michigan lose to Ohio State on Sunday, the Terps will be in sole possession of the conference regular season title. Maryland defeated the Wolverines, 2-1, earlier this season. But going into Friday’s game, both teams had the same record. Either way, the Terps claimed the No. 1 seed in the Big Ten tournament, offering a chance to host early matchups.

Maryland hoped to dominate on Senior Day but instead looked sloppy and disorganized at times, needing a late score to sneak past the Wildcats. Northwestern had the upper hand to start the contest, scoring less than two minutes into the game to force the Terps into a 1-0 deficit for just the fifth time this year.

Following the initial goal, the team seemed to recognize an early lack of energy and made efforts to increase possession time. Still, the Terps struggled to complete passes and put up shots until a breakthrough in the 19th minute of play.

Forward Linnea Gonzales took a shot from the right corner in front of the goal, but goalkeeper Annie Kalfas reached out her right foot to stop it from going in. Forward Bibi Donraadt quickly rebounded the shot and tipped the ball into the net for the score.

Donraadt’s goal was Maryland’s sole source of offense in the first. The team attempted five shots in the period and only one other effort forced Kalfas to make a save. The Wildcats had seven shots in the opening frame, and each made it on target.

“When you play a team like Northwestern and … their backhands are as good as their forehands at intercepting, you really got to try to get the ball angles outside their lines,” coach Missy Meharg said. “Maryland just struggled a bit today in connecting where they wanted the ball in the space … but we found a way.”

Throughout the second half, Northwestern dominated in possession and shots, keeping Maryland on its heels with the conference title at stake. Holliday kept the Terps in the game though, saving each shot she faced in the half, and she finished with nine stops.

With the season on the line, Maryland gave Holliday a break and started to generate more offense in the final five minutes of the second half. On a loose ball in the circle, Donraadt slotted home her second goal of the contest to give Maryland a 2-1 lead before fending off the last-minute push from Northwestern.

Though the Terps are done with conference play until they enter the tournament with the No. 1 seed on Oct. 28, they play No. 23 Virginia on Sunday to conclude the regular season.