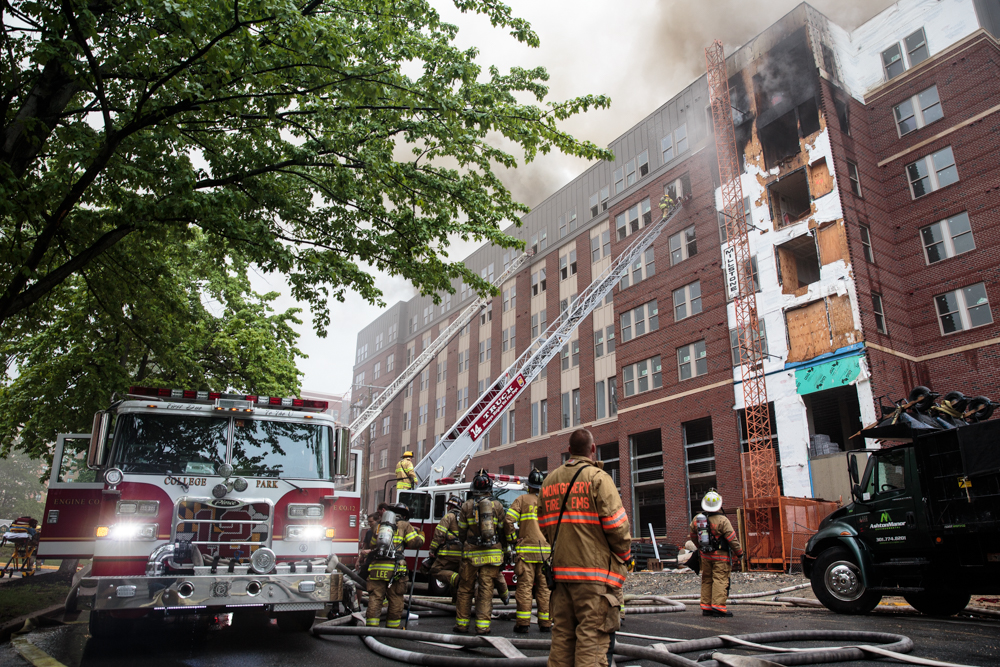 By Natalie Schwartz and Christine Condon

A five-alarm fire that tore through the Fuse 47 apartment complex and forced the University of Maryland to close Monday appears to be accidental, according to a Prince George’s County Fire Department news release.

Fire investigators are still working to determine the exact cause and origin of the blaze. This could take “days to weeks based on the structural integrity of the building,” according to the release.

The fire left the under construction apartment building at risk of collapse. Firefighters used hoses pumping 650 gallons of water per minute for more than five hours. This could cause the building, which is only supported by wood, to collapse floor by floor, said department spokesman Mark Brady.

The loss from the fire is estimated at $39 million, Brady said at a Monday briefing. Two firefighters suffered minor injuries. It took hours for more than 200 firefighters to douse the flames, and the incident has been labeled the “largest suppression effort” by Brady in a news release.

Part of the Fuse 47’s roof collapsed Monday. Senior citizens at a nearby apartment building were evacuated after some reported having breathing difficulties. The campus closed due to the “poor air quality from fire near campus,” university President Wallace Loh wrote in a tweet on Monday.

Joshua Baca, of the Build With Strength Coalition, a group pushing Maryland legislators to outlaw particular types of wood frame construction, questioned the building methods at the Fuse 47 complex.

Kenneth Isman, a professor in this university’s fire protection engineering department, noted the smoke from last Monday’s fire looked and smelled as though a lot of wood was burning. But, he said he thinks the current building codes are appropriate.

Fuse 47’s fire sprinklers were not yet operational at the time of the incident, The Washington Post reported.

“I don’t know for sure that you can argue that the outcome of the fire would have been different if the materials had been different,” he said. “There will still be other combustibles on a construction site.”

The complex will not be able to open in July as planned, according to a statement on Fuse 47’s website.