Nickelodeon cut ties with Dan Schneider. Is it because he’s a creep? 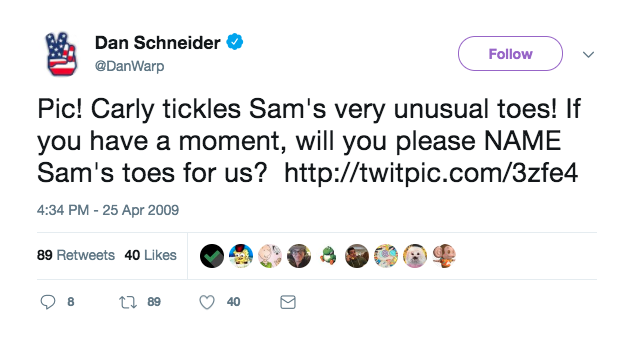 Millennial adolescence was defined by Dan Schneider productions. Almost every iconic Nickelodeon show — from All That and The Amanda Show to Drake and Josh, iCarly and Victorious — was brought to us by Schneider. But now the network has severed ties with the writer and producer.

Nickelodeon and Schneider issued a rather formal statement regarding the split, saying “both sides agreed that this is a natural time” to move on, as many of Schneider’s current projects are coming to an end. But some Twitter users and media sites have pointed out a history of sexual innuendo involving child stars on his shows.

Back in September 2017, twitter users @deludedkiss and @jaedenized tweeted examples of sexual innuendo and barefoot play on his shows, and Schneider’s social media posts about feet — including a tweet from the Sam and Cat account (@SamandCat) soliciting pictures of feet from fans. Feet were a staple of the humor on all of his shows:

LIKE LOOK THIS ISNT EVEN A QUARTER OF ALL THE FOOT SCENES IN EPISODES, HOW DO MORE PEOPLE NOT NOTICE HOW MUCH HE SEXUALIZES MINORS’ FEET pic.twitter.com/24nri5ReUq

Schneider also posts on his personal accounts about feet, especially the feet of the young female stars on his shows.

Pic! Carly tickles Sam’s very unusual toes! If you have a moment, will you please NAME Sam’s toes for us? http://twitpic.com/3zfe4

There are countless conspiracy videos about Schneider on YouTube, and more threads and discussions about the producer have appeared on Twitter since Nickelodeon’s statement. Among these things are allegations that Schneider’s behavior impacts the child stars far beyond their time on his show.

Jennette McCurdy has starred on two of Schneider’s shows — iCarly and Sam and Cat. She once directed this disturbing Vine at Schneider, saying “Look what you’ve done to me.”

From 2012 to 2015 actress Amanda Bynes went through a rather public mental breakdown — she spent the majority of her childhood and teen years starring in Schneider’s productions, such as TV shows All That, The Amanda Show and What I Like About You, and the film Big Fat Liar.

Schneider’s programming is known for sexual innuendo — jokes that fly over kids heads, but click for parents. This is true of a lot of kids shows, but the sexual nature of Schneider’s renowned comedy is uncomfortable to look at en masse.

like dude, did you not have ANY OTHER outfits, it’s a KIDS SHOW, + the choreography is literally them shaking their asses, like stop pic.twitter.com/dA81BXFVH3

i can’t even explain this one. he always puts his actors in weird sexual situations/innuendos and doesn’t even TRY to make it subtle pic.twitter.com/sQBisFZcss — ‏ً (@deludedkiss) September 17, 2017

why this? also dan is so gross, were not even into the deep shit. this is innuendos, & sexualizing. wait until you see what else he’s done pic.twitter.com/LOp2P2Eh1N

If there’s anything we’ve learned from the #MeToo movement, it’s that a lot of sexual misconduct has been expertly hidden and manipulated by the Hollywood machine. Schneider may not be a criminal, but the pseudo-uncovering of including child actors in his bizarre foot obsession and writing of sexual jokes for children’s programming is enough to question the reasoning of his exit from Nickelodeon.

It’s perfectly valid to fire somebody from a job involving children if there’s any worry they may be causing harm to those children them, and it’s a good thing Schneider is no longer involved with Nick. His shows are some that I look back on fondly, but the sexual imagery and forced maturation of child stars by Schneider needed to go.

Schneider brought us a lot of good content growing up, but it’s difficult to enjoy that content knowing there may have been some darkness behind the scenes. It’s hard to think of all the money we contributed to somebody who may have been exploiting our role models all this time — a sentiment that applies to a lot more than just Schneider’s work.