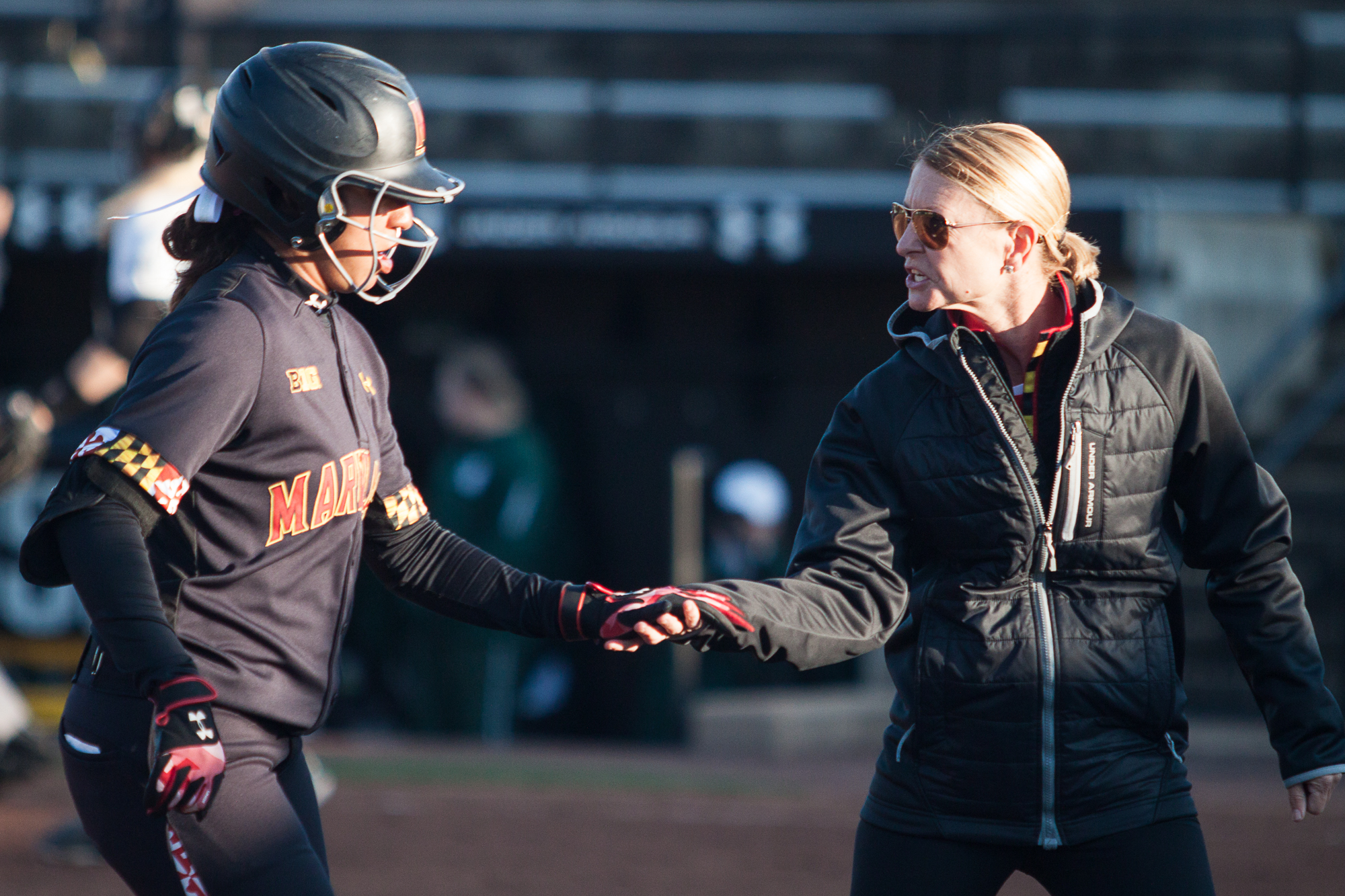 Head Coach Julie Wright supports Outfielder Destiney Henderson after an out during Maryland's match against Michigan State at the Maryland Softball Stadium on April 8, 2016. (Reid Poluhovich/ The Diamondback)

Maryland softball coach Julie Wright asked her players to complete a punishment run for not following instructions in practice last October, four months before the start of the season.

Outfielder Kylie Datil said it was the hardest training session the Terps had ever endured. After the workout, she remembered glancing over, exhausted, to see her often animated and intense first-year coach “smiling as if we had just won the World Series.”

When someone asked Wright why she was grinning, she offered a quick response.

“You got better today,” she said.

As the Terps third coach in as many seasons, Wright hasn’t been able to provide a quick fix for a struggling program. With six games remaining, the Terps are 11-35, a mark that matches where they finished two seasons ago. That team’s record was the worst in program history.

But in the eyes of her players, Wright’s coaching style has brought a newfound energy and purpose they believe they can build on moving forward.

“To me, that was a huge eye-opening experience because punishment runs aren’t fun,” Datil said. “But she made us look at it as … we’re getting better. That’s the biggest thing a coach needs to do. Just show that everything you do is for a reason.”

Wright knew it would be “a process” to get Maryland back to the NCAA Tournament, which the squad hasn’t participated in since 2012. And after she moved from Idaho State, which competes in the Big Sky, to the Big Ten, Wright’s first-year goal has been to lay the foundation for future success.

But first, Wright had to build a level of trust with her new squad.

“It’s hard for a team,” Wright said. “Whether they played for a good coach or a bad coach doesn’t matter. What really matters is the change.”

Less than three weeks into the season, assistant coach Lisa Norris, also in her first season with the program, believed the coaching staff had already gained that conviction.

Wright furthered that notion more than a month later, standing up for her player after what infielder Lindsey Schmeiser called a “dirty play” in a game with Michigan State.

In the first inning against the Spartans on April 10, an aggressive slide wiped out infielder Skylynne Ellazar. Wright sprinted onto the field, shouting, “That’s not OK” in defense of her injured player, who was forced to leave the game.

Wright’s outburst fired up the Terps, who scored five runs in the following half inning and went on to beat the Spartans 9-8 on a walk-off hit by pitch. The win secured their only weekend series victory of the season.

“We’re like her kids,” Schmeiser said. “If you do something to her kid, you got another thing coming.”

While striving to gain credibility with the Terps, Wright has also asked her team to show more passion. It’s a coaching philosophy traceable to her roots in an “eccentric and very positive” Westerville, Ohio, household.

Her family was tight-knit, she said, but its gatherings consisted of fiercely competitive bocce ball and horseshoe games, giving her the edge she now channels on the softball field.

Norris, who managed against Wright last season as an assistant at Louisiana-Lafayette, thought Wright was “nuts” at first glance.

The players have noticed her lively personality, too.

“She’s the most energetic person I’ve ever met,” pitcher Madison Martin said of Wright. “She just really cares about us and cares about the game.”

In an attempt to bring her team closer, one of the first things Wright did after being hired was implement additional team-building activities.

During the offseason, Wright required each player to go on two dates per week with another teammate. She also held a pre-season retreat in which players shared their hopes and fears about the upcoming campaign.

“She makes us into a family,” pitcher Brenna Nation said. “When you’re in a family atmosphere, it’s a lot easier to grow.”

Started by freshmen twins Andi and Ari Jarvis, along with catcher Kristina Dillard, the team dresses up in pirate attire in the dugout during the fourth inning of every home game. Players wear eye patches, hooks and sailor hats while songs such as “Jack Sparrow” and “Black Pearl” blare through the speakers. Everyone participates.

Dillard, who transferred to this university from Louisville in the fall, said the tradition, as well as the team’s overall chemistry, helped her adjust to playing in College Park. In turn, she’s become one of Maryland’s top producers at the plate, tied for second on the team in batting average.

But during one of her first practices in a Terps uniform, Dillard was caught off guard when Wright posed a simple question.

“What do we get to do today?” Wright asked her. Confused, Dillard answered, “Homework?”

“No,” Wright replied with a laugh. “We get to play softball.”

Now, before each practice, Wright asks the team the same question. The players, in unison, answer with enthusiasm: “To play softball.”

It’s a reflection of how the Terps have come together under their new coach. Though their record is disappointing, they’ve rediscovered their purpose and love for the game of softball.

In the future, they hope that passion translates to on-field success.

“It kind of puts into perspective that this should be fun,” Datil said. “It’s not as much of a job like how it’s been the last two years. It’s more of a hobby now.“