EpiPens will soon be available in UMD dining halls 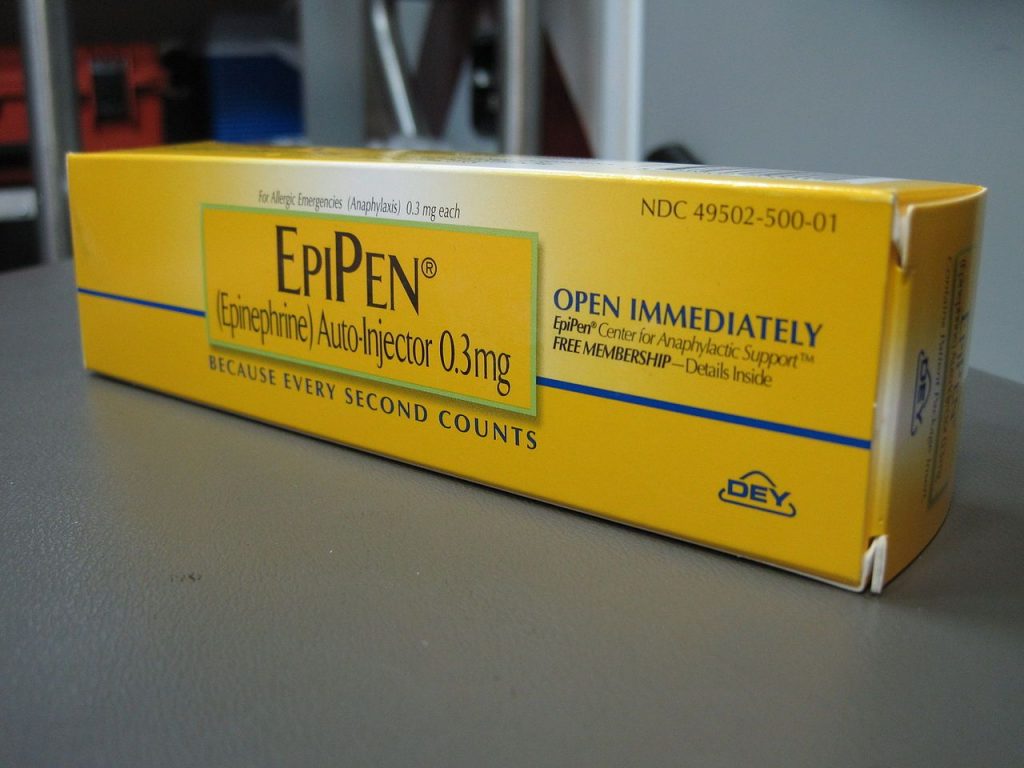 The cost for EpiPens has increased by about 500 percent since 2007. (File/The Diamondback)

The University of Maryland has received preliminary approval to carry EpiPens in dining halls for the first time.

Dining Services director Colleen Wright-Riva said the department hopes to have several two-packs of EpiPens available in each dining hall within around two weeks. She added that Dining Services has “been worried about students with allergies for many, many years.”

About 40 managers and culinary team members have been trained in performing CPR, using an AED and recognizing the signs and symptoms of anaphylaxis, as well as how to administer an EpiPen, she said. This process began in November and is ongoing.

Wright-Riva said the department plans to train around 20 to 40 more staff members through an optional training process run by University Recreation and Wellness.

“The law has never allowed us to entertain having EpiPens,” Wright-Riva said. “So last year, in collaboration with the health center, we talked about, what can we do to change the law.”

House Bill 1473, which went into effect in October, permits colleges and universities to “obtain and store auto-injectable epinephrine under specified circumstances” — something that was previously restricted due to liability issues.

After the law went into effect, Wright-Riva worked with University Health Center director David McBride to create a protocol for the initiative.

“There’s a lot of requirements. So you can’t just say, ‘Oh, it’s the law — now you can make it happen,’” Wright-Riva said. “The law requires that we have a plan of action, and that [the] plan of action be vetted by the state health department, and then we meet a certain criteria.”

Under the law, there must be a sign outside the dining hall that states it’s certified to administer epinephrine injections, as well as a plan of where and under what conditions the devices will be stored. In each dining hall, there will be a yellow medical box containing the EpiPens next to an AED.

The state health department gave this university approval to implement its plan after it was sent to them in early March. McBride said the school may have to update or change the plan if the state alters its standards.

While Wright-Riva initially said that the initiative would be in place by spring break “with luck,” it has taken longer than expected to make sure everything’s in order.

“We need to install our medical boxes, receive our [EpiPen] supply and review our training protocol one more time,” she wrote in an email.

Every three minutes, a person in the U.S. has to go to an emergency room due to a food allergy reaction, according to Food Allergy Research and Education.

Junior Mira Tash has severe allergies to dairy products, tree nuts and sesame, and has experienced intense anaphylactic reactions during her time at this university.

During her freshman year, she frequently ate at the vegan station to avoid dairy. Once, she said, she experienced anaphylactic shock after eating a slice of cake she was told was nut-free and dairy-free.

After walking back to her dorm and experiencing a swollen throat and lips, inability to swallow and a puffy face and body, she started to have difficulty breathing. She gave herself an epinephrine injection and called 911.

The next day, she said, Dining Services told her the cake had contained dairy.

“Mistakes happen,” Wright-Riva said. “If you forget your EpiPen and have a reaction, I want to have an opportunity to provide you with an emergency EpiPen.”

She added that the initiative is meant to serve as an extra layer of protection for students with allergies.

Tash, however, does not rely on anyone else to carry EpiPens.

“I know that if I don’t have an EpiPen with me, I should not be eating” she said. “If I plan on eating in even the slightest bit, it’s on me to bring my EpiPen.”

Still, she said, it’s good “to know that if I forgot it, it would be there.”

Sophomore civil engineering major Thomas Hughes has a tree nut and sesame allergy. He said that while he considers his allergies to be “niche” ones that don’t affect him much on a daily basis, the new initiative is a good step for this university to take.

“It’s definitely a good thing,” he said. “It’s just another layer of security.”