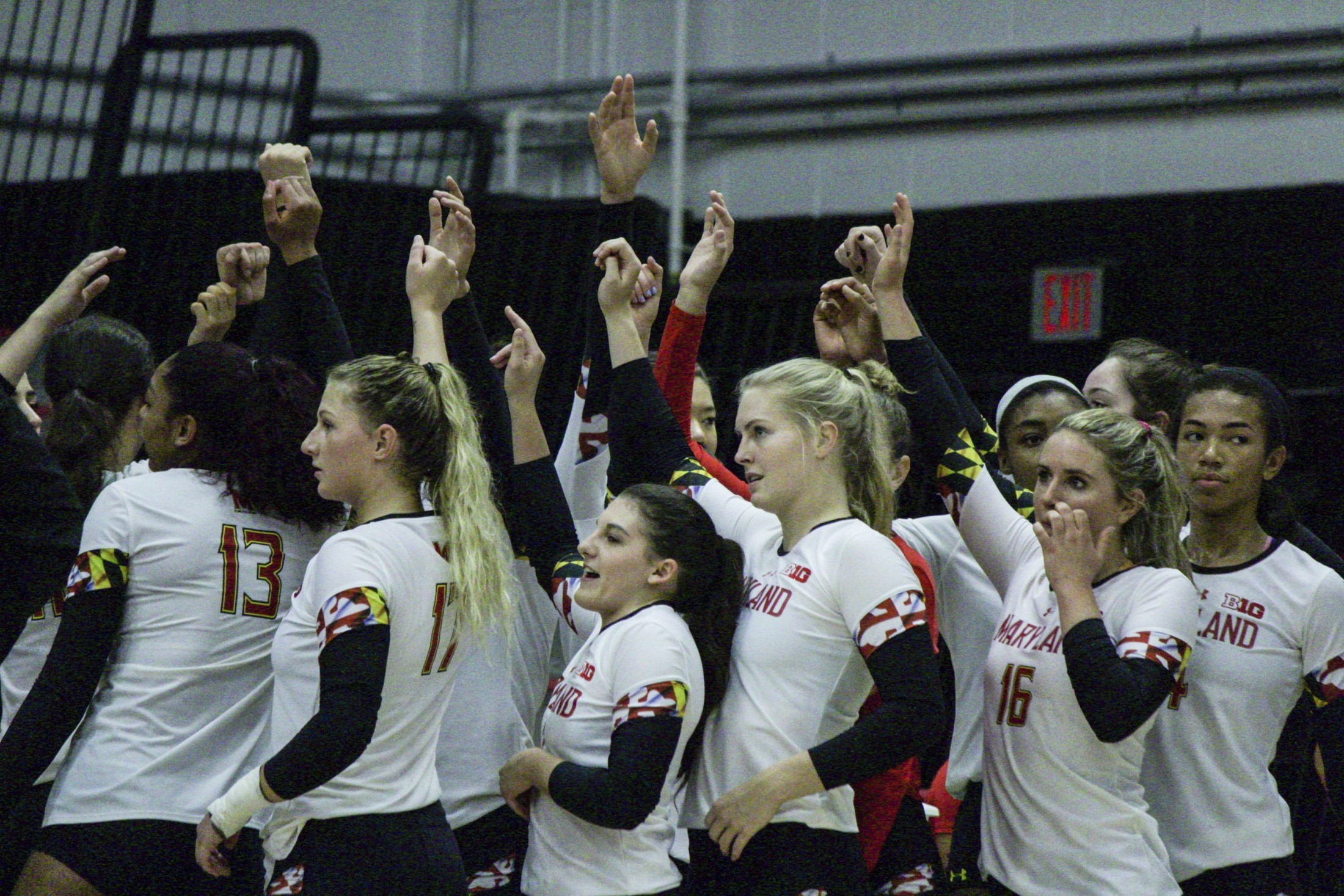 But Aird pulled outside hitter Gia Milana aside prior to facing the Nittany Lions and told her to help Drechsel with a high-toss serve, a style Milana has employed since high school that creates a fast, dipping ball.

Serving was a part of an expanded role for Drechsel this weekend. On Friday against Rutgers, the freshman earned her first start since Sept. 1 and followed with another versus the Nittany Lions.

Despite initial struggles from the end line, Drechsel’s outing showed flashes of what the Terps expect of PrepVolleyball’s No. 23-ranked recruit in the 2017 class.

“I know where it’s going,” Aird said. “I need more from her, so we’ll try to get her more involved, but she’s got a really high upside.”

Aird didn’t expect much from Drechsel’s sudden responsibility to serve. In Drechsel’s five attempts Saturday, she notched three service errors. Playing on the Xfinity Center main floor with 4,127 fans in the stands, though, is the atmosphere Aird wanted her to experience.

The fourth-year coach wants to build a deep service rotation, especially if Drechsel can become part of the rotation.

Drechsel said Aird pushed her during practices before the Terps’ Big Ten home opener. As the top prospect in Maryland’s highest-ranked recruiting class, Drechsel’s start to college volleyball has been slower than other rookies on the team.

Middle blocker Jada Gardner, for example, is playing a large role for the Terps after middle blocker Katie Myers’ season-ending injury. And outside hitter Erika Pritchard has started all 18 matches and is second on the team in kills.

Drechsel, meanwhile, has played in 17 matches with three starts. She averages 1.78 kills per set, but is hitting .137 — more than 100 points below the team’s average. Aird said her limited time stems from her position and team dynamics. Drechsel can play multiple positions, while Pritchard is purely a left-sided player. Therefore, he tends to use Drechsel as a substitute on the right or left to attack.

The pressure of being a highly-touted recruit is natural, Milana said. The Romeo, Michigan, native was the highest ranked recruit the Terps have ever secured.

“You have to think of yourself as not a freshman anymore,” Milana said. “Coach is going at her a little bit in practice on purpose. He knows, and everyone else knows, that she has another level in her. Just needs to be awakened.”

Drechsel struggled with her third service error late in the third set against the Nittany Lions and left the match — she didn’t return — with the score tied at 19.

“I know what it feels like to learn that serve,” Milana said. “It’s a pretty tough serve to hit, but I know that she can eventually be dangerously good at it.”

But early in the third frame Saturday, Drechsel helped establish a 9-5 edge over Penn State. Though it evaporated en route to a straight-sets defeat, she followed a pair of consecutive solo blocks with two kills.

Another kill later evened her attacking line with six kills and six errors, a string of production that showed Aird the consistency he wants.

“It’s something I’ve been working on a lot in practice, making the right decision,” Drechsel said. “If the set isn’t there, not to swing my hardest and to be a little more crafty and make less errors.”