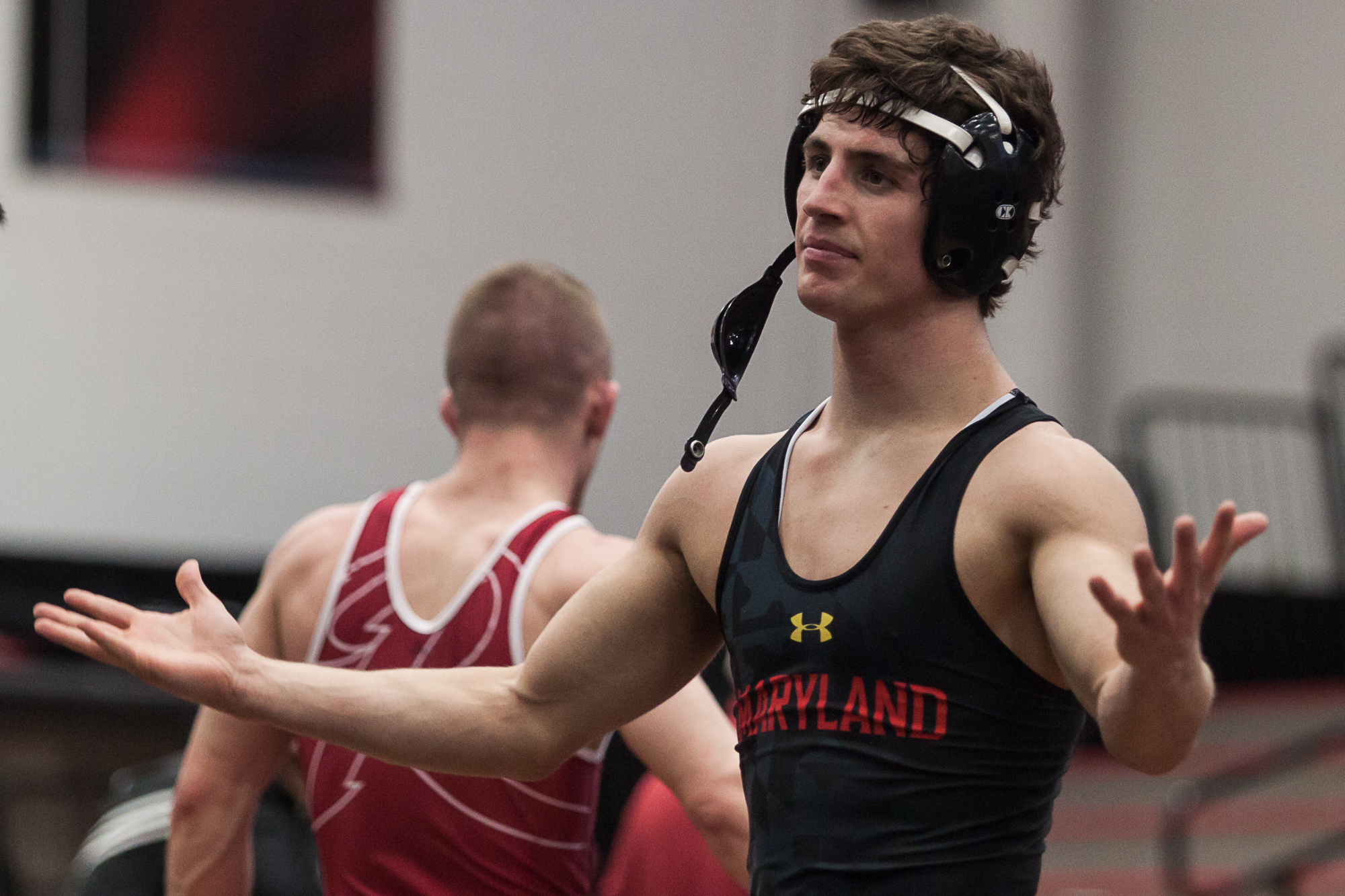 Geoffrey Alexander shows his frustration to the crowd during the Terps' 26-12 loss to Rider University at Xfinity Pavillion on Feb. 20, 2016. (Reid Poluhovich/The Diamondback)

With three days remaining before the NCAA Wrestling Championships kick off in New York, 133-pound Geoffrey Alexander seemed unfazed. On Monday morning, the redshirt senior, clad in all red, laughed and smiled in the Terrapins wrestling room in the Xfinity Center.

Alexander, heading to his fourth NCAA Tournament, knows what stands in front of him. Aided by his past experiences, the veteran is ready for what awaits him at Madison Square Garden on Thursday.

“I’m cool, calm, and collected, but when I step on the mat, it’s game face,” Alexander said. “This is my fourth time and I know what it’s like. I know what it feels like for both sides—both winning and losing.”

For Alexander, the tournament will begin with his bout against Northern Illinois’ Austin Eicher, the Mid-American Conference champion. After finishing eighth at the Big Ten Tournament, Alexander earned the 14th seed in the tournament, the first time he’s been seeded in his four trips to the Tournament.

“Being seeded is a big plus in this tournament,” coach Kerry McCoy said. “You’re going in there wrestling an unseeded guy in the opener.”

While Alexander’s ultimate goal is to win his weight class, he and McCoy also hope Alexander can finish in the top eight to earn All-American status and become the first Terp to do so since 184-pound Jimmy Sheptock in 2014.

Since the conclusion of the conference tournament nearly two weeks ago, Alexander has followed a training plan he created with the coaching staff. The Pittsburgh native has lifted weights, grappled with training partners and watched film on Eicher and other possible opponents.

“Got a plan rolling from last week into this week, and it’s been going well,” Alexander said. “Push hard when you need to push hard, back off when you need to back off. It’s been a great week of training.”

But after battling a shoulder and neck injury for much of the season, the focus now is on relaxing and getting Alexander’s body in peak condition, McCoy said. Alexander took a bus to New York on Tuesday morning with coaches, and between then and Thursday morning, he didn’t plan a strenuous workout.

Besides the team’s staff and his family, about 15 teammates, including his roommate and best friend 157-pound Lou Mascola, will be cheering on Alexander in the final bouts of his career.

“[I] got a lot of support and a lot of people behind me in this quest,” Alexander said.

While he has participated in the event three times previously, Alexander still has unaccomplished goals. When he arrived in College Park about five years ago, his goal was to place in the sports’ premier tournament. But for years, he’s been foiled by the nation’s best. Now, Alexander wants to capitalize on his final opportunity.

Until Thursday, though, he’ll have to wait for his turn.