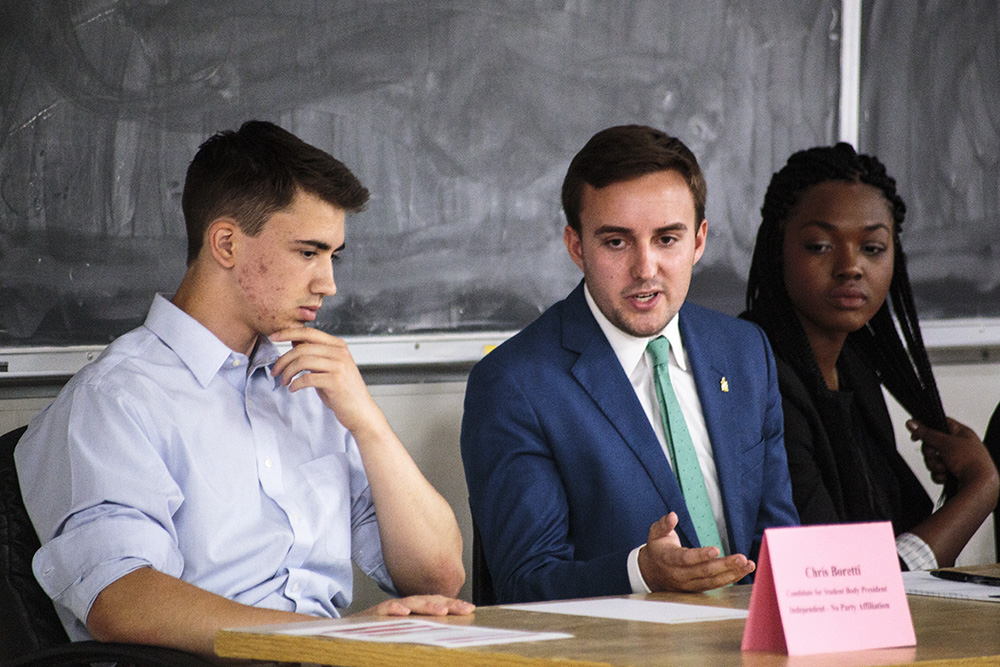 Hours after the Unity Party withdrew its entire ticket from the University of Maryland’s SGA elections, the One Party still attended Thursday’s debate against an unaffiliated challenger.

The One Party is the only remaining party on the ticket and there are two remaining unaffiliated candidates, including unaffiliated presidential candidate Chris Boretti, a freshman finance major. The election became virtually uncontested after the Unity Party dropped out Thursday afternoon following reports in The Diamondback revealing the ticket failed to disclose all of its contributions in its April 9 financial report.

“This idea that we now have this unopposed election isn’t true, because I think [Boretti] is a great candidate,” said One Party presidential candidate A.J. Pruitt, noting that the One Party didn’t ask the Unity Party to step down. “But I also think we started off with two great parties trying to discuss issues, and I’m disappointed that we don’t have that opportunity.”

“We have resources available at this university to implement that kind of programming,” said Pruitt, a junior economics and government and politics major. There is currently required online training for all students, faculty and staff — a program that was established in 2014.

Boretti agreed, stressing that “this university needs to dedicate as many resources as possible.”

The task force this semester has also recommended improving sexual assault prevention on the campus by increasing bystander intervention training, consent education and workshops for students every year they attend this university. This university added sexual misconduct training to freshmen orientation sessions last summer, and CARE to Stop Violence announced last spring semester that it would incorporate its bystander intervention training into all UNIV100: The Student in the University courses starting in fall 2016.

Boretti also responded to a moderator’s question about the executive candidates’ views on the Deferred Action for Childhood Arrivals program — which allows some undocumented youth to work and study in the U.S. for two-year increments — and its possible fate under President Trump. Boretti said Trump’s rhetoric has softened on the issue.

As of fall 2016, there are 113 students at this university covered under DACA.

Pruitt said the proposed price tag for the program, $130 per semester for on-campus students, was too high and would need to be explored further.

Boretti said he disagreed with the proposal entirely, calling it an unfair “tax” on students who do not use the Metro system often. He used the issue as further example of his central outsider campaign theme, saying campus leaders may advocate for the fee because it is a service they would utilize.

Concerns about garnering more student involvement to properly represent the student body were also repeatedly raised during the debate.

Boretti expressed concern early on in the debate about the lack of student body engagement and participation with the SGA.

“When we compare Maryland to some of the other Big Ten institutions, the SGA truly falls short, and I want to change that,” Boretti said.

Boretti questioned if the SGA was just a “resume stamper” for the organization’s members.

“That’s a tough comment because I see the passion, the intensity that student representatives put into it,” Pruitt said. “As an organization we have to make sure all of our time isn’t spent on policy … SGA has potential to do great things for students and improve their lives, but we can’t accomplish a lot of those things because our turnout is so low.”

To better represent the student body’s issues and concerns, Pruitt said legislative representatives should hold office hours within their constituencies and take advantage of polling as a tool to effectively vote on legislation. SGA members also need to speak to students year-round, rather than solely canvassing during election season, Pruitt said.

“The SGA needs to be amplifying the voice of its student leaders and all of its students,” Pruitt said. “We haven’t done a perfect job, but we’re making progress and getting closer and closer.”

Junior sociology major Meiling Liu frequently attended SGA meetings at Howard Community College before transferring to the University of Maryland, she said. Liu found the meetings at this university to be “intimidating,” she said.

Christine Hagan, candidate for the vice president of academic affairs, said it is an issue that students don’t know who represents them and what resources are available for them at this university.

“We’re going to be more successful if we continue to work with groups that have similar interests,” Hagan said. “Continuing to know which governing bodies represent which communities … is absolutely a goal of ours.”

Pruitt reflected on his time on the SGA and his desire to continue serving the student body, this time with the One Party.

“We are not perfect, but this year we have had an incredible amount of success and hope to continue that,” he said.

SGA elections will run from April 19 to April 21.