The hidden treasures of the WMUC record library 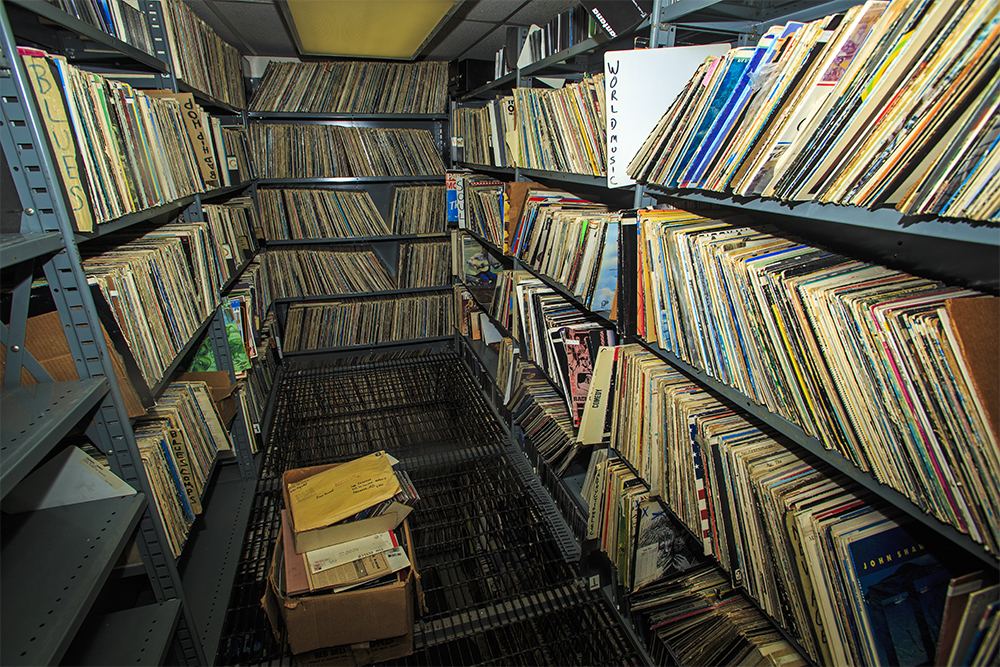 High above the South Campus Dining Hall’s clattering trays and steaming buffalo chicken wraps, there is a room.

The room is shadowy and cozy, despite glaring fluorescent lights. A spiraling metal staircase leads to an iron nest of latticed floor and shelves. On those shelves sit pieces of history, too innumerable to count.

The library predates most of us, originating in the 1960s and 70s. Disc jockeys received vinyl much like DJs today receive demo CDs from record companies and independent artists alike, and sometimes, DJs brought their own, said Laura Schnitker, a ethnomusicologist and sound archivist who has worked with WMUC since 2006.

“Some of them have told me that they brought records to WMUC and left them there in good faith so people could use them, and either forgot about them or donated them because they knew they weren’t going to listen anymore,” she said.

As music is a precious commodity not to be wasted, the donations amassed.

Well-hidden within WMUC’s labyrinthine corridors, the library is surprisingly expansive. Two levels of metal shelving nestle what could be upward of 25,000 records. No one really knows the exact amount, and no one’s really counted, but rumor says the collection is the biggest east of the Mississippi River, Schnitker said.

For decades, WMUC was the only alternative radio station in the greater Washington area, Schnitker said, so local musicians found their audience on the station’s airwaves. Some of those artists’ LPs never made it big, but they made it to the record library.

“If you’ve seen it, you know it’s huge and it’s really diverse,” Schnitker said. “There’s some very obscure stuff in there. I’ve wondered if it exists anywhere [else].”

More than just indie gems populate the shelves. Titans of classic rock, oldie balladeers and virtuoso pianists take up residency in the same neighborhood. One visit turns up everything from The Who to Bob Seger to Chopin to Paul Anka. A few select rarities — original Lennons and a Fleetwood Mac — occupy a separate space to ensure their safety.

On the walls are jackets that lost their record somewhere along the way: A few favorites are a collection of whale sounds called Deep Voices and Robin Williams’ comedy album Throbbing Python of Love.

For all its splendor, the library is delightfully disorganized — for now. Former record librarian and senior communication major Aminat Yahaya started an organization system that the current librarian, Meredith Pecukonis, is continuing.

“The system is continuously in progress,” Yahaya said. “What we’ve been working on is getting back to order and creating it by genre and, within that genre, by alphabetical order.”

The staff also catalogs the records to track their movements and minimize theft.

Few DJs currently spin vinyl live. If they want to, station policy asks that they bring their own needle, as “needles seem to disappear quickly” Yahaya said. That doesn’t necessarily mean the records are pointless. More of a modern museum than a storage room, the library is “a collective record of the musical past that didn’t survive the migration to digital format,” Schnitker said.

“If we didn’t have it, that stuff would be lost forever,” she said.