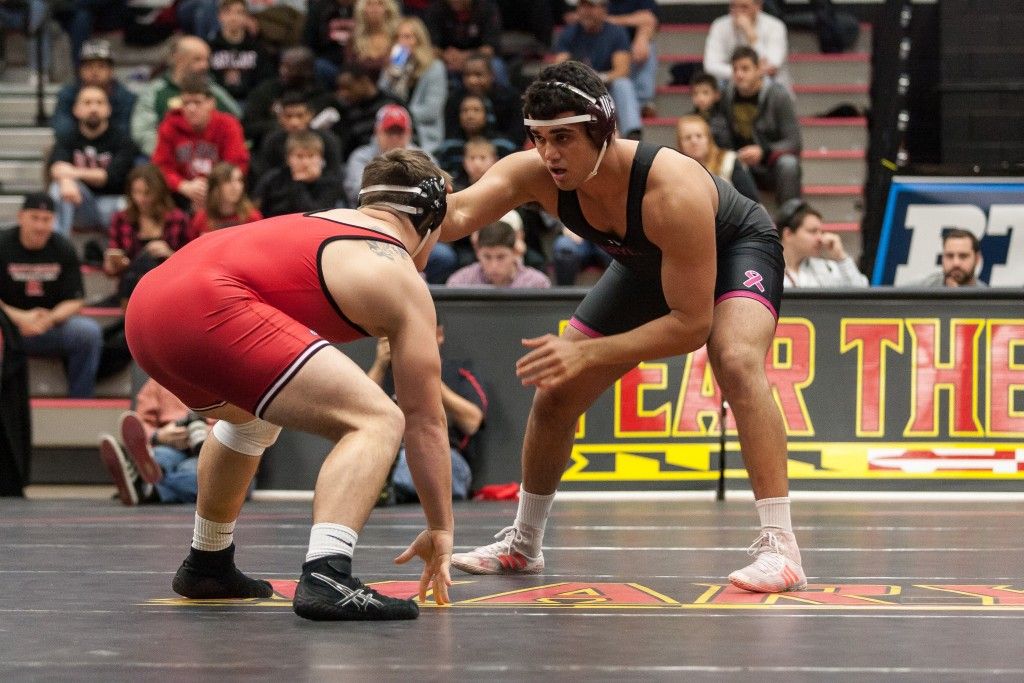 Sophomore Youssif Hemida lines up an opponent before a takedown in Maryland’s 21-13 defeat to Rutgers on Dec. 11, 2016 at Xfinity Center. (Marquise McKine/The Diamondback)

Still basking in the glory of earning All-American status for the second time, Maryland heavyweight Youssif Hemida took the mat one last time as a college wrestler Saturday.

Even with his loss to Oregon State’s Amar Dhesi in the fifth-place match, Hemida ended his time as a Terp with a sixth-place finish at the NCAA tournament, the program’s best since 2014.

“I’m so proud of him,” head coach Kerry McCoy said. “Words don’t even do it justice.”

Hemida used a dominant day-two performance at the NCAA tournament to stay alive. The deeper he got into the bracket, though, the tougher his opposition became.

Minnesota’s Gable Steveson went undefeated through the regular season, but two losses to Penn State’s Anthony Cassar — at the Big Ten and NCAA tournaments — dropped him into the consolation bracket.

When Steveson and Hemida faced off on Feb. 10, the freshman Gopher beat the senior Terp 7-3. The rematch didn’t go much better for Maryland.

After a scoreless first period, Hemida scored a one-point escape. But seconds later, Steveson grabbed a hold of Hemida’s leg and was able to get him down for the takedown.

Another Hemida escape tied the score at two heading into the third period, but Steveson used an escape and another takedown to pull away, claiming a 6-2 victory.

The fifth-place match started inauspiciously for Hemida, as Dhesi scored a takedown just over a minute into the match. Hemida escaped to cut the lead to one, but found himself trailing 2-1 going into the second period.

An escape by Hemida tied the score at two, but Dhesi once again slammed Hemida to the mat to regain his lead. Dhesi avoided Hemida’s takedown attempts, and with riding time, Hemida lost his final match 5-2.

A disappointing day three at the NCAA tournament hardly diminishes the accomplishments made by the senior during his three-day stretch. Coming in as the No. 10 seed, Hemida surpassed expectations and finished with a career-best sixth-place finish.

As an All-American in 2018 and 2019, Hemida has cemented himself as the most accomplished heavyweight to have wrestled for the Terps.