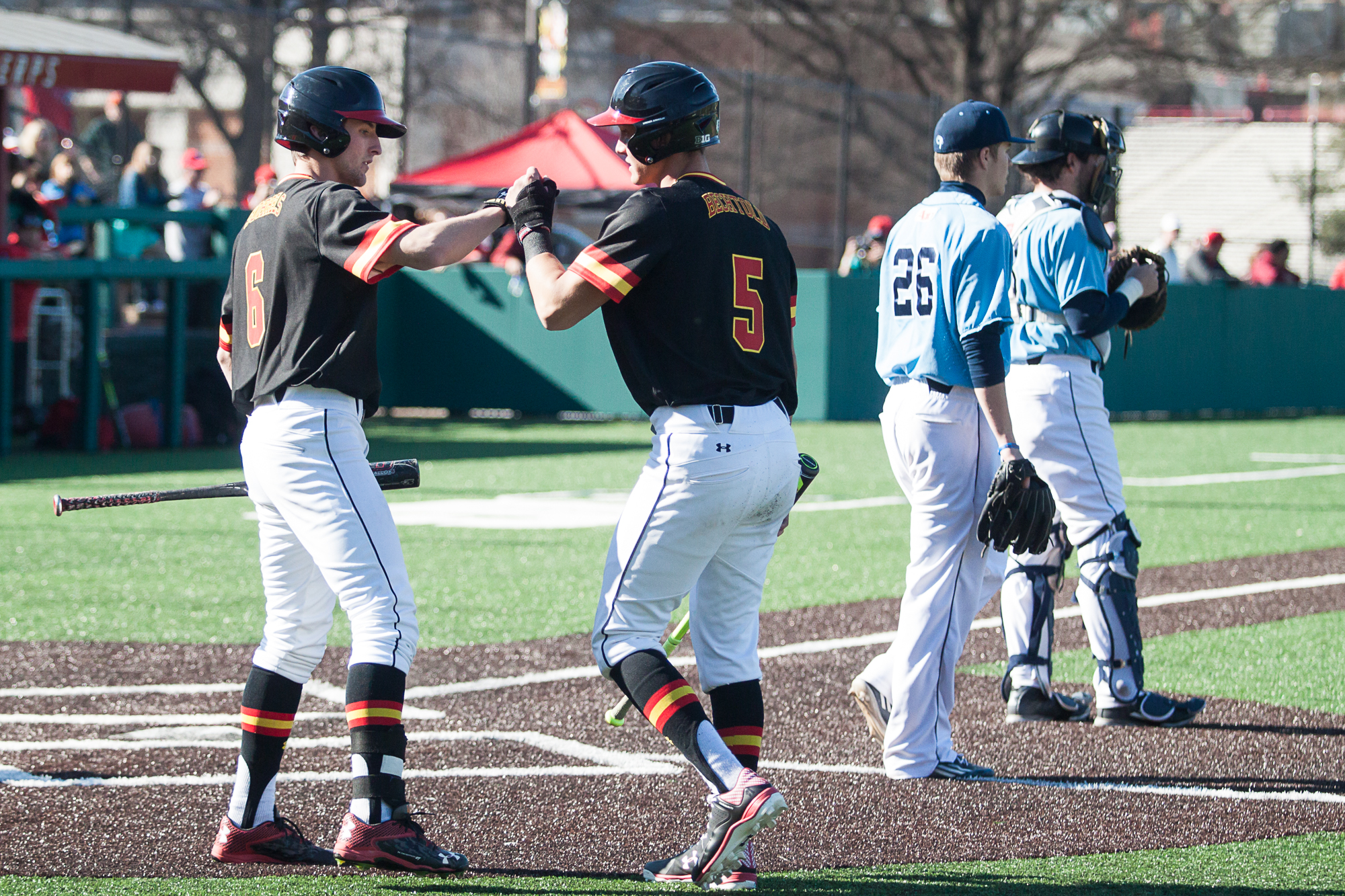 Infielders Andrew Bechtold and Peyton Sorrels fist bump after another run in the bottom of the 5th in the Terps' 13-10 win over University of Rhode Island at Bob "Turtle" Smith Stadium on Febraury 28, 2016 (Reid Poluhovich/The Diamondback).

When second baseman Nick Dunn doubled in the eighth inning of the Terrapins baseball team’s 13-10 win over Rhode Island on Sunday, it marked a breakthrough for the Terps.

Before Sunday, some of the less-experienced Terps had struggled through the first five games of the season. But when Dunn recorded his first hit late in the contest Sunday, he became the eighth Terp to notch a hit in the game.

For the first time this year, the Terps had success throughout the lineup, as coach John Szefc’s squad tallied 12 hits, 13 RBIs and four home runs. When the Terps (3-3) play at Delaware (3-3) on Tuesday afternoon, they’ll look to continue the hot hitting across the entire lineup.

“Once we finally broke through, the dam was broke and everyone was really relaxed,” designated hitter Nick Cieri said. “It was really contagious.”

Prior to the fifth inning of Sunday’s contest, the Terps’ batting order hadn’t put together a strong performance from top to bottom all season.

In the Terps’ first game against the Rams on Friday, all four of the team’s hits came from the top three batters in the lineup.

After losing five hitters in the offseason, the Terps’ lineup this season features just three players who started at least 30 games. So in the Terps’ five contests leading up to Sunday, players who didn’t have familiarity starting struggled to adjust.

While Szefc said the less-experienced group still has to improve, it went 7-for-22 (.318) on Sunday, an improvement after the Alabama series.

First baseman Kevin Biondic, who started 24 games last year, sparked the Terps’ rally in the fifth inning. With the Terps trailing 7-2, Biondic, who went 3-for-3 on the day, belted a two-run home run.

Cieri, a junior with experience playing in two NCAA Super Regionals, then blasted a grand slam as the Terps scored eight runs in the frame to take a 10-7 lead.

“We have good hitters; it’s just a matter of time to kind of get those guys going a little bit,” Szefc said. “What happened behind the grand slam in that inning was huge. If that doesn’t happen, I don’t know how that game ends.”

While the younger players settled in, Szefc said it was crucial that the more experienced players stepped up Sunday.

The three Terps who started at least 30 games last season ­— shortstop Kevin Smith, right fielder Anthony Papio and Cieri — combined to hit 5-for-13 (.385) with five runs and six RBIs on Sunday. Though Smith and Papio went a combined 3-for-23 (.130) in the Alabama series, they broke out of the slump Sunday.

And the Terps offense stepped up came at a crucial time, with the pitching staff tagged for 10 runs. Without the entire batting lineup contributing, the Terps might’ve been doomed for a blowout loss.

But after the Terps relied on their pitching in the first two games of this past weekend’s series, Biondic said the offense wanted to make a statement Sunday. They did that, with all but one spot in the lineup recording at least one hit.

When the Terps play the Blue Hens on Tuesday afternoon, they’ll hope to get everyone involved at the plate again.

“Once you get that first guy on, it just rolls from there,” Biondic said. “That’s exactly what we did. Luckily, I was the one who stepped to the plate and got it started. Everything fell into place from there.”