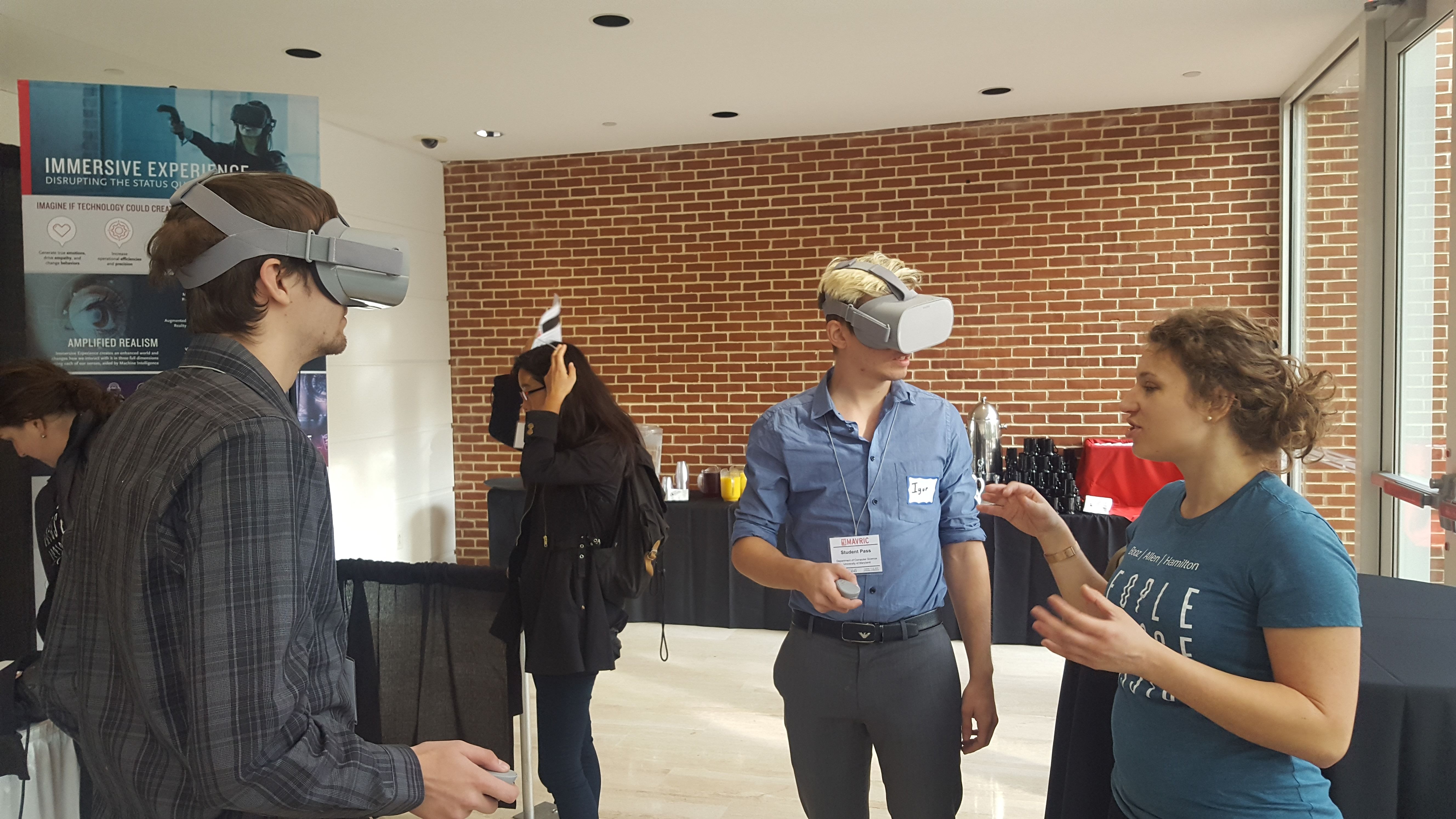 How will virtual reality fit into education?

It’s a question that University of Maryland staff and faculty like Amitabh Varshney are asking every day.

“It’s not just a technology,” said Varshney, the dean of the computer, mathematical and natural sciences college. “I think it’s really a significant shift in how we deal with media.”

On Wednesday and Thursday, student and regional virtual reality startups, government agencies and industry leaders showcased their accomplishments in the field at the first Mixed/Augmented/Virtual Reality Innovation Conference at the University of Maryland.

The conference, created using a grant from the U.S. Commerce Department’s Economic Development Administration, included 62 speakers and more than 200 participants.

“The goal is basically to create a community of people speaking about the work they’re doing and learning from that,” said Sameer Popat, the community connector for MAVRIC.

Popat said the conference is also a way to showcase the great work of students and faculty. Some of these projects include a joint augmented reality initiative with the Autism Research Consortium.

“You would walk through it and actually have the experience that someone of the spectrum of autism would have,” Popat said. “And you would get a better sense of their day-to-day operations.”

Thomas Savransky’s Savvy Tech LLC is just one example of the many student-run projects.

Savransky, a junior business major, started the company in 2017 with four people. Now, with more than 16 members, the company is developing augmented reality technology that deals with fashion tech. It allows users to try on clothing and “see the fit” using the application, Savransky said.

“We make contact with designers, models, people in the industry and even people who just purchased the clothing,” Savransky said.

The app is expected to be completed in one to two months. Savransky, who has attended New York Fashion Week twice, already has industry experts eager to test the product.

Savransky is one example of an independent student-run augmented reality startup. But there are also many campus-run programs. These include the Graves MakerSpace opened in 2014, which features 3D printers and Oculus headsets, or there’s VisiSonics, a 9-year-old startup specializing in 3D audio that’s based out of the Perceptual Interfaces and Reality Lab.

“As a student and at the general consumer level, 3D audio is the next stage for augmented reality and virtual reality,” said Conor Mulvey, a sales manager with VisiSonics. “We’re trying to add the secondary, auditory experience.”

Mulvey, who graduated from this university with a masters of business administration in 2010, said the startup’s 64-element microphone array with five video cameras, can be used for individuals to experience a conference or speaker remotely.

“You can put on a headmounted display like an Oculus and be able to look around and virtually be at a concert hall,” Mulvey added.

Virtual reality is not limited to the sciences. Augmented reality helps researchers to examine athletes for kinesiology and study effects of implicit bias in sociology, Varshney said.

While many courses are making strides to implement augmented reality, some students are looking to clubs to learn more about the technology.

“I wanted to find something to make a difference,” said Taylor Bartlow, a junior astronomy major who joined the AR club at this university.

Bartlow, who currently interns with MAVRIC also hopes to implement augmented reality into her career path and into finding life on other planets

“I really want to show people that it’s not boring,” Bartlow said. “It’s another whole new world that we can experience.”

While Bartlow has limited technical experience, she said “there’s other things you can do” besides coding. She hopes involvement in AR will improve as more freshman come into the university.

“I think they’re paving the way of already doing that slowly,” Bartlow said. “Classes are getting more involved in that.”

But there are some drawbacks, include the cost of the hardware and technology as well as the necessity for standards of practice in the industry.

“How do you stop it if at any moment you’re no longer comfortable?” Popat said. “We as a community need be asking these questions as these technologies and platforms get developed.”

Savransky added that another issue with the technology is people drawing into themselves.

“Reality is what we exist in,” said Popat. “It is good to have other experience but it’s also important to remember that we have to talk to each other.”

As augmented reality technology improves and adapts, Bartlow said we also have to take note of its scary downsides.

“All my drawbacks are quoted from Black Mirror,” Bartlow said. “I take things to the extreme.”