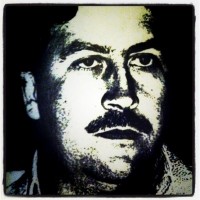 The first time we meet Pablo Escobar, he’s been stopped at a roadblock outside of Medellin, Colombia. Sunglasses-wearing federal agents demand that he open all of his trucks. He is, of course, smuggling something or other. Systematically, he recites all of the agents’ names, the names of their spouses and family members and offers to make it “worth their time” to let him continue. Several men pop out of the trucks and train assault rifles on the officers. This is the crux of negotiation with Pablo Escobar: plata, o plomo. Silver, or lead.

The above scene never happened in real life. It is, in fact, one of the opening vignettes in Narcos: the acclaimed Netflix crime drama/thriller based on the exploits of Pablo Escobar. Escobar, a cocaine kingpin worth something like a hundred billion dollars at the time of his demise, ruled Colombia’s illegal drug operation from the mid-1970s until his death in 1993. His ascent from teenage petty crime to the seat of an operation that required an estimated $2,500 of rubber bands per month to wrap its cash intake is the ultimate rags-to-riches tale. What Narcos conveniently forgets, however, is the collateral cost of Pablo Escobar.

The show lies by omission more so than it does by fabrication. It’s true that Escobar challenged a corrupt political system in Colombia by running for office (and winning). It’s true that he cultivated a Robin Hood image among Medellín’s poor by funding hospitals and schools. It’s true that Escobar seems to be the absolute embodiment of the ability of one man’s ability to change one’s destiny through force of will.

It’s also true that Escobar took in underage children, armed them and created a personal army of hitmen. It’s also true that he held the Colombian government hostage through a terrorist regime of bombings and hijackings. It’s also true that he turned Medellín into the “murder capital of the world.” He placed bounties on the heads of police officers. (More than 600 were “redeemed,” as it were.) More than 25,000 Colombians were violently killed each year in the early ’90s. That’s the undergraduate population of this university.

Narcos is entertainment. More than that, the name derives from “narcotraficante” — Spanish for drug trafficker. Of course the series is going to glorify Escobar. However, the extent to which Narcos dodged the human cost of Escobar’s actions is almost baffling. Leaving untouched his legacy of violence is an affront to Colombia’s history.

Jack Siglin is a junior physiology and neurobiology major. He can be reached at jsiglindbk@gmail.com.