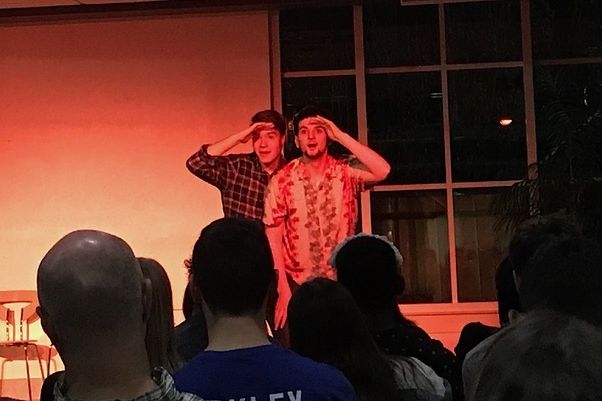 Members of the UMD comedy group The Bureau perform improv comedy at Stamp on Friday, Feb. 22, 2019 (Photo by Morgan Pravato/For The Diamondback).

The show started with four members performing their own short stand-up bits. Newer members held their own in the show, as freshman journalism major Kayla Kozak opened the performance. She transitioned from hilariously relatable jokes about building her perfect man to her struggles with anxiety. Her honesty was admirable. Few would be able to speak to a crowd about their personal struggles with mental health, let alone joke about it.

“I find it to be kind of cathartic,” explained Kozak; joking about her anxiety and night terrors has become a form of therapy. She joined The Bureau after searching for a relaxed performance opportunity at the university. Although she was involved in theater in high school, she described it as a toxic environment.

Sophomore math major Devon Slattery followed Kozak. She also exuded a special confidence as she joked about men, bars and her self-described “short girl aggression.” Slattery has been a performer for years — she previously attended the Regional Center for the Arts.

Senior Jerry (“Seinfeld”) Katz walked onstage after Slattery, looking concerned and breathing heavily. He continued to breathe heavily into the microphone as he unfolded a piece of paper that appeared to be his notes. His bit became one of the show’s highlights, as he played the character of an anxious comic.

His first words to the audience, “Good evening Milkboy Arthouse,” made viewers erupt into laughter. Looking embarrassed, he continued to unfold paper and sticky notes with shaky hands, throwing them about the stage as he stumbled through his cringe-worthy jokes.

Self-proclaimed “funniest man on campus,” Elliot Bromberg, ended the stand-up set. The senior bioengineering major naturally laughed about his bad experiences with weed and played into his love for “eagle jokes,” comparing his vision to the bird’s.

The Bureau then launched into short-form and long-form improvisation, showing off how creative their members are. The young comedians developed scenes based on suggested occupations, locations and relationships from the audience. Their creative quick thinking was on full display as they were somehow even able to relate the prompts “cannibal,” “magic school bus” and “chicken and egg” with impressive transitions.

“The Very Hungry Capitalist” was thoroughly entertaining, and a refreshing way to spend a Friday night. However, the title seemed out-of-place. Some expected The Bureau to base their show on political satire, or to mock the capitalist structure of the United States, but their show did not follow that direction. While audience members certainly experienced an evening of laughter, no political references were found.

The Bureau will continue to show off their skills throughout the semester, with their next show coming up in March.