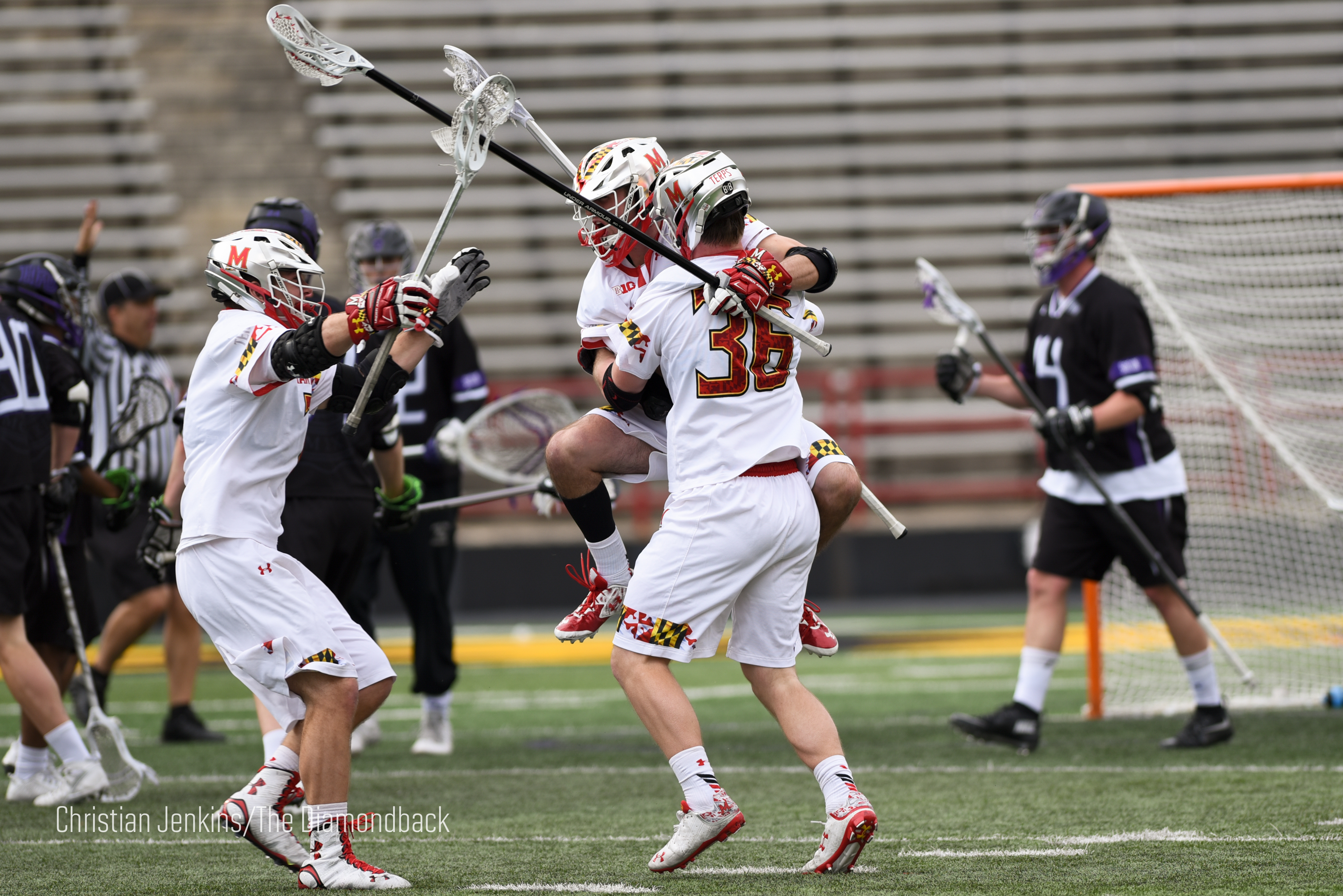 Terps celebrate after longstick midfielder Nick Brozowski scored a goal to increase their lead in the fourth quarterwhen the Terps defeated Highpoint 15-10 on Feb. 16, 2016.

The Terrapins men’s lacrosse team’s season openers have been lopsided the past few seasons.

So the No. 4 Terps found themselves in unfamiliar territory Saturday afternoon at Maryland Stadium. Facing High Point for the first time in program history, the Terps entered the half trailing, 6-4.

But behind seven goals in the third quarter, the Terps overcame the early deficit to down the Panthers, 15-10, and extend the program’s season-opening winning streak to 23 games.

“We kind of took the first option, not really the best option,” Tillman said. “We’re trying to find that sweet spot of playing fast and capitalizing on opportunities but not pushing too hard and trying to create something that maybe isn’t there.”

The emphasis on a quick attack was evident when the Terps’ first goal of 2016 — which came off the stick of 2015’s leading scorer attackman Matt Rambo — hit the back of the net 32 seconds after the opening whistle.

Before five minutes passed in the opening quarter, the Terps had built a 2-0 advantage. They watched it evaporate, however, as the Panthers strung together two 3-0 scoring runs to enter halftime.

High Point attackman Dan Lomas and midfielder Michael LeClair, who led the Panthers with four goals apiece in the Panthers’ loss to Boston on Tuesday, contributed to the scoring stretches. The duo finished the game with a combined seven goals against a Terps defense that held opponents to an average of seven goals per game last season, the best mark in the country.

“When they were scoring, yeah it was frustrating to see that, but you just had to look onto the next play,” attackman Dylan Maltz said.

Midfielder Bryan Cole kept the Terps within reach. The senior, who finished the game with a career-high seven points on three goals and four assists, netted a shot from the top of the crease with 23 seconds left in the first half to pull the Terps within two scores.

After his shot sailed past Panthers goalkeeper Tim Troutner (16 saves), however, Cole lurched forward as High Point midfielder Richard Byrd fell into him. A scrum in front of the net ensued, as referees on opposite sides of the field threw yellow flags to assess Byrd with a two-minute unsportsmanlike conduct penalty.

The Terps ran out the final seconds of the period to enter intermission with a two-goal deficit, but the extra-man advantage carried over.

Fifteen minutes later, the Terps returned to the field with a vengeance.

Attackman Louis Dubick mirrored Rambo’s start to the game with a goal to begin the second half. The Potomac native slashed in the first score of his freshman year 42 seconds after play resumed. Minutes later, midfielder Colin Heacock, who posted a hat trick in the second half, tied the game at six goals.

Four of the team’s seven points in the frame came in the final six minutes, igniting cheers from the Terps faithful that grew louder as the teams’ advantage widened.

With the Terps’ fast-paced offense clicking, the crowd counted down as the final seconds ticked off the clock in the third quarter. The chant simmered when longpole Nick Brozowski unleashed a shot with four seconds left.

The fans roared as the Terps on the field celebrated the redshirt freshman’s first career score. Then they trotted back to their positions for the ensuing faceoff, prepared to build on their two-score lead in the final fifteen minutes.