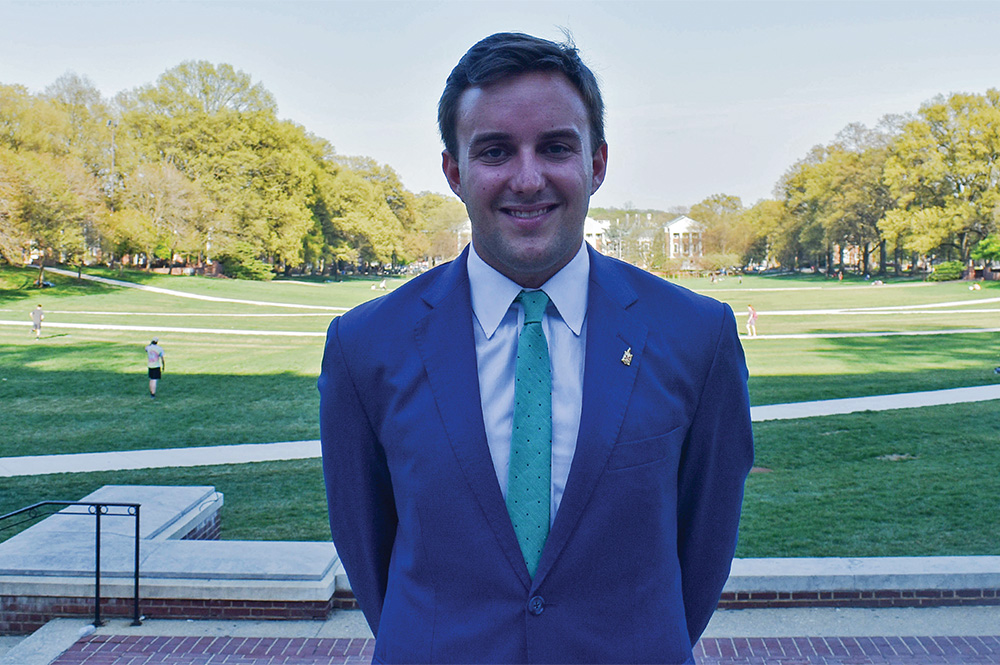 A.J Pruitt, one of the three SGA presidential candidate, poses in front of the mall.

“Over the past two years, we have allowed incidents of hate and bias to fester within our community,” he wrote in the statement, which the Student Government Association posted on Twitter. “We have failed our mission as an institution of higher education.”

In his statement, Pruitt promised to submit a bill to the SGA during the first meeting of the fall semester requiring all presidents and treasurers of student organizations seeking SGA funding to undergo diversity training, a measure he called “long overdue.”

ProtectUMD, a coalition of 25 student groups at this university, requested mandatory diversity training for all SGA-recognized and Greek life organizations in November and in its May protest at the Main Administration Building.

Pruitt said he intends to mandate that the training be in place by either spring or fall 2018, adding that he hopes to see it expand gradually to all SGA-recognized groups and possibly to all students at this university.

The statement also called for a joint University Senate task force with university President Wallace Loh to address issues regarding diversity, inclusion and student safety on the campus. Pruitt asked that the task force include a student chair or co-chair and for students to make up the majority of the body.

Loh announced the creation of a similar task force, which will review university procedures on hate bias incidents and campus safety, in a statement to the campus community Wednesday night. Pruitt said he looks forward to working with Loh to ensure this task force meets campus needs.

“I’m glad there’s finally some action,” Pruitt said. “It’s too bad that this didn’t happen sooner … I’ve said I’m willing to work with him and members of the administration, but also work with our student leaders across campus to prevent another incident like this to occur and make sure we’re protecting our students who need it most.”

Pruitt cited an April incident, which is being investigated as a hate bias incident, where a noose was found in this university’s Phi Kappa Tau fraternity chapter house. University Police did not notify the campus about the incident until nearly one week later.

The SGA’s statement comes four days after Collins, a black Bowie State University student, was stabbed to death on this university’s campus. White University of Maryland student Sean Urbanski has been charged with first- and second-degree murder and first-degree assault in connection with the incident. University Police are working with the FBI and Prince George’s County Police to determine whether it was a hate crime.

Ja’Nya Banks, SGA’s diversity and inclusion director, said collaboration between the student body and the SGA is important now more than ever.

“Especially at this time, it’s important that we, as a SGA, are working to be really a voice for the student body and working alongside the actions that student leaders have already taken,” said Banks, a senior special education major.