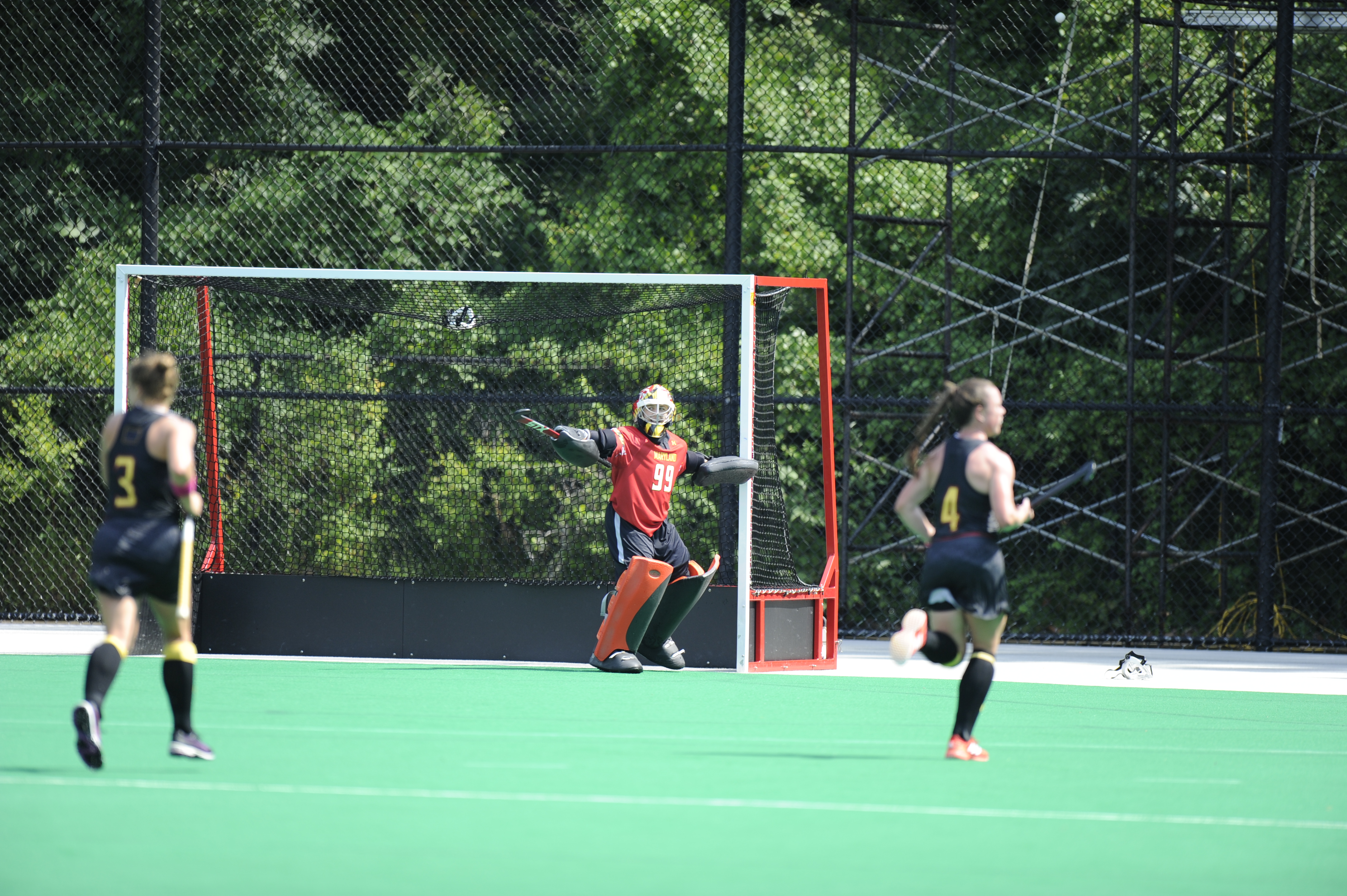 With 22 minutes remaining in the Maryland field hockey team’s game against Old Dominion on Tuesday, goalkeeper Sarah Bates needed to protect the Terps’ 2-1 lead. Bates left the net, sliding feet first toward the ball as a Monarchs player charged down the field.

Bates’ efforts preserved the lead as the No. 7 Terps downed No. 13 Old Dominion, 2-1, at the Field Hockey and Lacrosse Complex. It was their ninth victory in 12 contests, but the first one Bates started between the posts. The redshirt junior shined in goal, making two saves on Old Dominion’s four shots.

“Sarah’s been awesome this whole year,” forward Welma Luus said. “She got her chance, and she played really well. I’m happy for her.”

Bates, who transferred from Penn State before last season but sat out a redshirt year in 2015, has made 12 saves in seven appearances this season, allowing only three goals. She entered the game against Old Dominion off a career-high six saves in the Terps’ win against Michigan last weekend.

Coach Missy Meharg opted to ride Bates’ momentum and to take pressure off goalkeeper Sarah Holliday, who had started every game prior. “I think she’s ready,” Meharg said. “She’s had great practices. She came back ready. We’re really fortunate to have two ready goaltenders to call upon any day.”

In the locker room after Monday’s practice, Meharg told Bates the news.

Bates was nervous, but she couldn’t wait for Tuesday evening’s contest.

“I was really excited. I was nervous,” Bates said. “Just focused on the game and doing the best I could do. I’ve been waiting a long time for this.”

In her first test of the evening, Bates faced an Old Dominion penalty corner with less than ten minutes remaining in the first half. After the Monarchs targeted the bottom left corner, Bates kicked the ball away for her first save of the game. While Maryland’s defense buckled down against Old Dominion, Bates had some trouble with the sun in the second half. After Meharg called a timeout with about four minutes left in the game, Bates joined the team huddle and trainer Sandy Worth, who covered the top of Bates’ mask with masking tape, protecting her from the sun’s glare.

“It was really brutal,” Bates said. “Everyone back there suffered from it.”

Meharg didn’t commit to a starting goalie for Friday’s contest with Michigan State, though she said she has confidence in Bates and Holliday. “We’re both amazing goalies; you never know what it comes down to,” Bates said. “If I have an ‘oops’ in the cage she could easily come in.”

The Terps’ offense controlled possession throughout the contest, and Meharg was proud of Bates’ concentration despite the Monarchs’ lack of shots. She focused on her performance in her first college start instead.

“It’s a little bit harder to focus when the balls down at the other end so much,” Bates said. “As goalies we’re very stressed to just maintain our focus and what we can do in the cage. When I’m in the cage it’s about focusing on what I can do.”