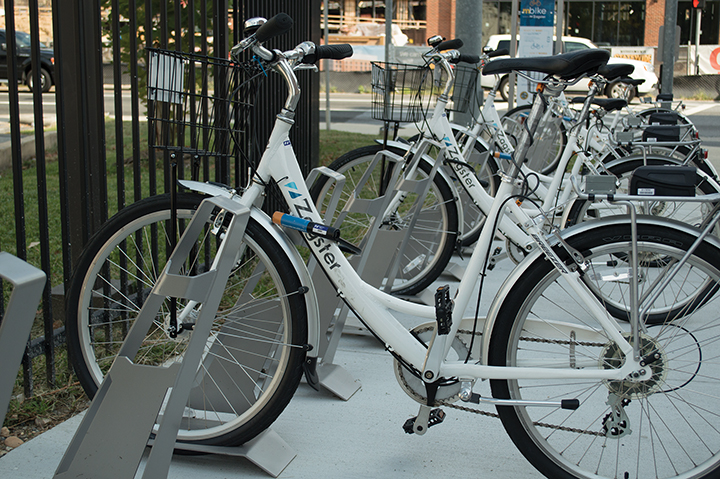 Zagster bike share locations are located on campus and in various places throughout College Park.

The University of Maryland reached its goal of reducing greenhouse gas emissions more than 25 percent by 2015, according to its 2016 Sustainability Progress Report.

A large factor in reaching this milestone was this university’s decision to transition to “clean energy,” said Mark Stewart, senior project manager in the office. In previous years, he said, the energy used was almost completely “dirty,” but last year, 76 percent of the energy came from renewable sources.

“There’s been a massive transition to renewable,” Stewart said. “We’re getting a lot of renewable energy from wind and solar projects in Western Maryland and even into Pennsylvania and West Virginia.”

Paper usage has also been decreasing on the campus, according to the report, as “people are digitizing files and aren’t printing as much out,” DeLeon said. And with the growing popularity of the water bottle filling stations, almost 3 million fewer disposable water bottles have been saved since last year, she said.

This university is currently revising its Climate Action Plan to “really chart a clear path toward meeting our upcoming 2020 and 2025 greenhouse gas reduction goals,” Stewart said. The revised plan will hopefully be released by next semester, he said.

“What a lot of other schools are realizing is that, in order for us to prevent catastrophic climate change and prevent the worst effects of climate change and the highest carbon emissions scenarios, we really need to be carbon neutral much faster,” Spaur, a senior environmental science and technology and government and politics major, said.

Although this university “would be happy, if they could, to achieve carbon neutrality before 2050,” there are many factors that limit this university’s ability to speed up the process, said Scott Lupin, associate director of the envronmental safety, sustainability and risks department.

“All [of the limitations] were understood when we committed to becoming carbon neutral,” Lupin said. “We knew that technology and markets and so forth would evolve with time. Everybody is going in the right direction, and certainly if we can get there before 2050 everybody will be very grateful.”

Students can make a positive difference in this university’s greenhouse gas emissions and sustainability efforts by changing routines, such as making sure to turn lights off or riding a bike instead of driving a car, said Samantha Bingaman, an undergraduate representative on the university’s sustainability council.

“The first thing we can all do is think,” Bingaman, a senior environmental science and policy major, said. “Changing those small aspects of our lives can make these huge collective differences, even if it’s just starting from the individual perspective.”