Maryland gymnastics opens the season with the Red vs. Black intrasquad meet 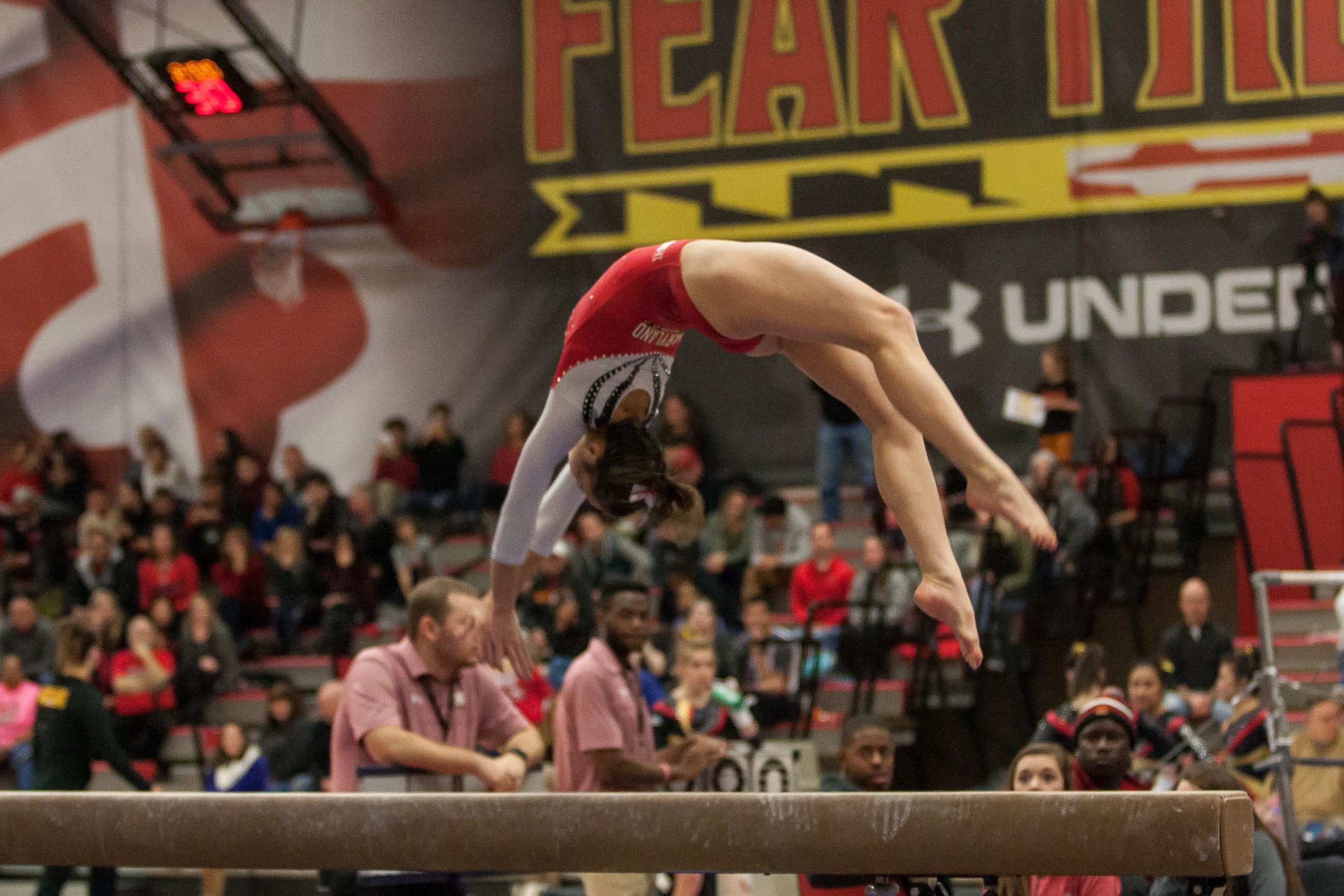 The Maryland women’s gymnastics team waved and tossed T-shirts to its fans prior to the team’s annual Red vs. Black intrasquad meet at the Xfinity Center Pavilion.

As players sprinted on the runway during their vault routines to open the meet, teammates raced alongside them, cheering them on and eventually greeting them with high-fives and smiles after they landed.

Both were examples of the Terps keeping the mood light Friday night in their first competition of the season — an 187.800 to 186.600 for the Red side.

“It’s an incredible experience to have my whole team by my side,” said freshman Deanna Magro. “It’s such an uplifting experience, it really gives you a lot of energy.”

The freshman called her first Maryland meet a success, noting that she hit her routines “as well as [she’s] been hitting them in the gym.”

“Tonight, I really just learned how to control all the energy that’s going on, slow down, hit your routines the way you know how to do,” she said.

The meet provided fans their first glance at a team comprised of six freshmen. Jen O’Neill, one of those freshmen, was unavailable because of a torn Achilles she suffered her senior year of high school that Nelligan said she is still recovering from. Alecia Farina, another first-year gymnast, anchored the team on vault, bars and floor.

“She’s a phenomenal gymnast,” coach Brett Nelligan said. “She has the potential to score really well, so we want to have her at the back of the lineup.

“She knows how to be a closer, she’s just a winner, that’s how she’s built.”

Sophomore Megan McClelland fell during her beam routine but recovered to finish strongly.

From there, she had a roughly 15-minute gap before she took to the floor.

“Thinking about falling isn’t going to do anything,” McClelland said, “so let’s just get all of our energy focused towards the next event.”

Maryland football, men’s soccer, women’s tennis and women’s volleyball players judged the event, which traditionally lends itself to a lively aura as opposed to having a competition-type feel. Nelligan said he does not pay attention to the judges’ scores in a meet like this.

When sophomore Alex Robinson took to the beam, volleyball players Nell Drummey and Kelsey Wicinski sat nearby at a judges’ table, mouths agape as they watched in awe.

As the meet was in its final stages, senior Sarah Faller, with ice on her leg, limped from the bars to the floor to watch her teammates. Nelligan said she rolled her ankle about two weeks ago.

“She’s tough as nails, she’s a warrior,” Nelligan said. “There’s no way she wasn’t going to come out tonight and put up a great performance.”

Maryland will team up with the wrestling team Jan. 8 when it takes on West Virginia at the “Beauty and the Beast” meet.

“These intrasquads,” Nelligan said, “they’re everything, and they’re nothing. There’s so much great stuff that I saw tonight, so that gives me a lot of encouragement… but we really want to be ready for January.”