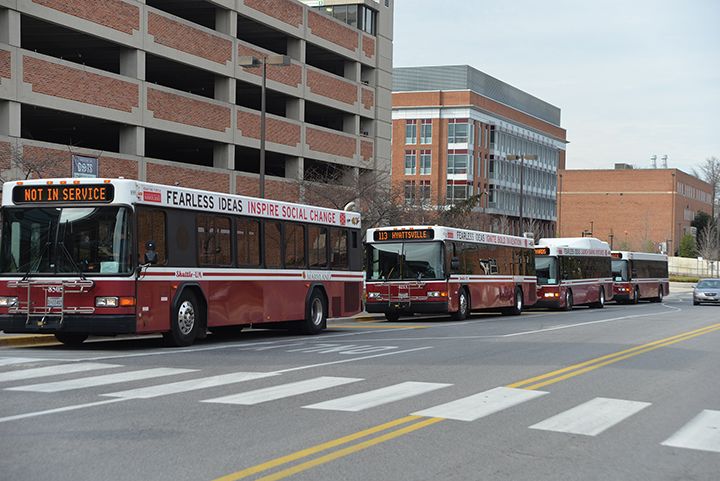 After a campaign to increase ridership, the University of Maryland SGA has partnered with DOTS to reinstate a biweekly shuttle bus to transport students to Annapolis for the spring semester.

The bus runs from Stamp Student Union to Lawyers Mall — near the state capitol building — on Tuesdays and Thursdays during the spring semester. It aims to serve as a convenient and inexpensive way for students to get to internships in the state capital.

The standard cost to charter a bus with the Department of Transportation Services is $450 per day, according to DOTS spokesperson Cara Fleck Plewinski. However, as part of a deal with DOTS, the Student Government Association gets a discount on the bus, and instead pays $200 per day. This $200 is the at-cost-rate, or what it costs the department to actually run the bus, Fleck Plewinski said.

In 2017, when the Annapolis shuttle made its debut, ridership was low — an average of 3.5 students per trip, according to DOTS. This semester, the average is up to about 12 per trip, Fleck Plewinski said.

As part of their advertising campaign to increase ridership, SGA reached out to student groups on the campus, particularly those already focused on advocacy, SGA civil and governmental affairs director Gideon Epstein said.

To determine which days the bus would run, the SGA sent out an interest survey, asking students if they would need a shuttle to Annapolis and which days they would be most likely to use it, Epstein said.

The shuttle will run during the spring semester only, as it has since its implementation in 2017. Many of the riders intern for the Maryland General Assembly, which meets on Tuesdays and Thursdays from January to April, said Epstein, a junior government and politics major.

[Read more: The UMD SGA voted to support a DOTS bus route to Annapolis next semester]

However, SGA spokesperson Leah Barteldes emphasized that the bus is available for all students to use.

“It really is for any internship in Annapolis,” the senior government and politics and public policy major said. “It’s not just for opportunities in the State General Assembly, because I think people just naturally associate the two of them together. But there’s many things that people can be doing.”

The bus runs twice a day and mirrors the times of the average work day, leaving Stamp at 8 a.m. and departing Annapolis at 5:30 p.m.

Before the end of winter break, sophomore government and politics and public policy major Alyssa Conway had to commute to her Annapolis internship from home. She estimated that it took about three hours.

“I had to set my own form of transportation to make it to Annapolis,” she said. “It was a lot, and I’m definitely thankful now to have the privilege of using the bus.”

At the start of the semester, the shuttle left campus at 7:30 a.m., but many students felt they were arriving in Annapolis too early.

“We would get there so early, but the offices wouldn’t even be open until 9:00,” Conway said. “We would be stranded in Annapolis for 30-40 minutes, and we wouldn’t really know what to do.”

After hearing feedback from students, SGA student affairs vice president and fellow Annapolis bus rider Rohini Nambiar conducted a poll on the bus, asking students how they would feel about an 8 a.m. departure time.

Following a unanimous decision within the SGA, Nambiar reached out to DOTS with a formal request to change the bus’ departure time, and the schedule was adjusted the following week.

“I love working [with] people in [the] administration that are so willing to be flexible and listen to students,” said Nambiar, a senior public health science major.

Because of the bus’s success, Conway hopes that programs like it can be implemented in the future.

“I definitely feel that the bus is a good idea, and I feel that we should outstretch our means of transportation,” she said. “I feel like Annapolis shouldn’t be the only place that’s provided. I think it’s a good thing to have our opportunities outstretched through stronger transportation.”