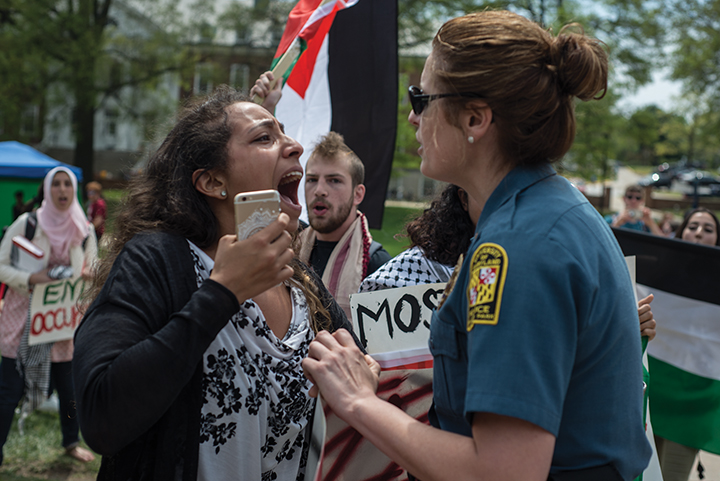 Laila, a Freshman Biology student, tears up while shouting "I'll never see my family again" on McKeldin Mall today, as University Police officer Mary Payne ushers her away from the fountain.

Students for Justice in Palestine is formally joining a nationwide campus movement and calling on University of Maryland administration to boycott companies and institutions that promote the Israeli occupation of Palestinian territories.

Mlilo said SJP doesn’t know what organizations this university may be invested in, but that they may file a public records request to find out.

Members of the organization plan to table in front of Stamp Student Union on Fridays to gather signatures for a petition and to educate students about the group’s cause, Mlilo said. Once they’ve gathered enough signatures, they hope to work with the Student Government Association to create a bill that would support the boycott and bring the petition to the administration.

The Boycott, Divestment and Sanctions movement aims to “end international support for Israel’s oppression of Palestinians and pressure Israel to comply with international law,” according to its website. The movement has picked up momentum on college campuses across the nation in recent years. Several universities’ student governments, including those at the University of California, Riverside and the University of California, Santa Cruz, have passed resolutions for their campuses to pull out investments in companies that support the occupation. Companies named include Hewlett-Packard, Caterpillar, Lockheed Martin and Elbit, an Israel-based defense technology company.

More than 12 states have adopted laws or executive orders opposing the BDS movement, and Maryland lawmakers are currently considering legislation that would penalize any companies that take part in the boycott.

“Any such boycott is a breach of the principle of academic freedom that undergirds the University of Maryland, and indeed, all of American higher education,” Loh wrote in the letter. “… To restrict the free flow of people and ideas with some universities because of their national identity is unwise, unnecessary, and irreconcilable with our core academic values.”

This university has student exchange programs with Tel Aviv University, University of Haifa and the Technion-Israel Institute of Technology.

Mlilo said Loh’s statement is “hypocritical” because Palestinian students in Gaza and the West Bank have restrictions placed on their higher education opportunities by the occupation. The blockade in Gaza has restricted access to school materials and educational institutions have faced “large scale, deadly military attacks,” according to a 2010 UNESCO report. About 67 percent of university students in Gaza said they do not feel safe at school, according to the same report.

“[BDS] is a non-violent means of boycotting and it’s not meant to discriminate against anyone,” said Mlilo. “It’s actually meant to promote equality amongst everyone and we’re not trying to harm anyone in doing this. We’re just trying to promote human rights and nonviolence.”

Jonathan Allen, president of Terps for Israel, wrote in a message that his organization was “firmly opposed to the BDS movement.”

“Terps for Israel actively supports the two state solution; one where a Jewish state can live side by side with a Palestinian state and ensure a durable, lasting peace,” wrote Allen, a sophomore economics major. “BDS is counterproductive to those efforts. It seeks to delegitimize and subject [Israel] to a ridiculous double standard … It is detrimental to the peace process because it discourages the necessary negotiations and compromises needed to make peace.”

J-Street president Ethan Weisbaum wrote in an email that while his organization understands and shares many of the concerns about the occupation of the West Bank and Palestinian suffering, J-Street does not believe BDS campaigns are an effective way to end the conflict and reach a peaceful resolution.

“It fails to respect the right of the Jewish people to self-determination, does not support a two-state solution to conflict and fails to distinguish between opposition to the occupation and opposition to the existence of Israel as a Jewish and democratic. state,” said Weisbaum, a senior history major.

SJP plans to reach out to student organizations, including groups such as J-Street, to cultivate their relationships and to garner support for the movement, said Shane James, SJP secretary and a senior history major.

“Divestment isn’t anything new,” James said. “It’s a tried and true strategy going back decades. … There’s been successes already [and] we’re trying to push more universities to do it.”