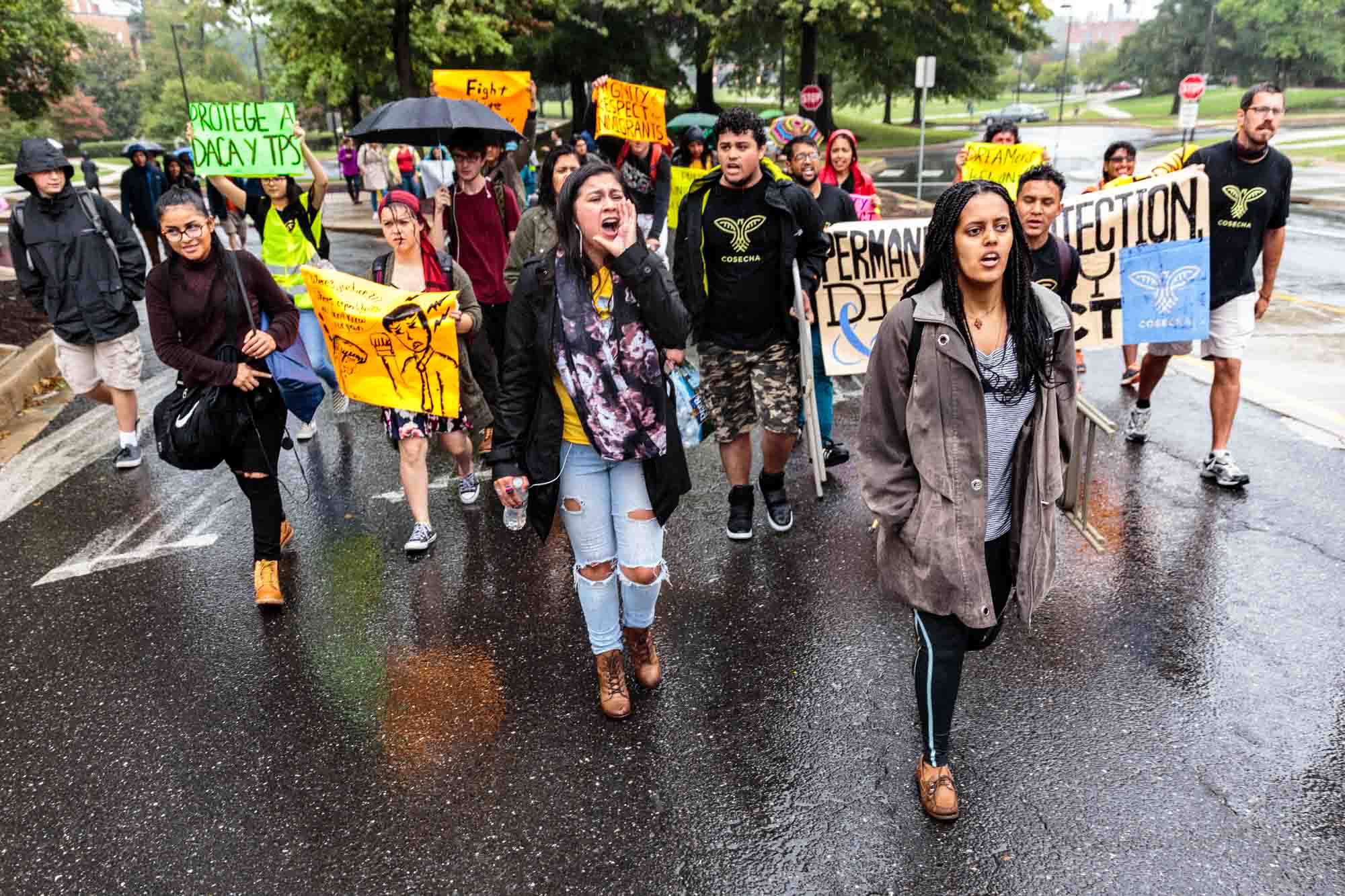 Nadia Salazar-Sandi, a community member, leads chants and demonstrators with Cosecha MD as they marched up campus drive to protest the treatment of immigrants in America on Tuesday, August 29, 2017. The demonstration lasted 11 minutes to represent the 11 million immigrants who may face deportation. (Tom Hausman/The Diamondback)

They are friends and neighbors, students and colleagues. They serve in the military, care for the sick and elderly and assist those recovering from natural disasters. We call them DREAMers — young people whose parents brought them to this country at a young age, who only know the U.S. as home. They are every bit as American as the rest of us; many have no memories of living anywhere else. And nearly 10,000 of them call Maryland home.

Several years ago, President Obama created the Deferred Action for Childhood Arrivals program so that these DREAMers could come out of the shadows and go to school, apply for school loans and apply for employment, among other things — allowing them to follow their dreams and fully contribute to their communities.

Yet, as a result of the Trump administration’s decision last month to end the DACA program, these young people now live in limbo, uncertain of their status, fearful of deportation and afraid they will be torn away from their families.

We believe Congress must take action as soon as possible to prevent such unconscionable outcomes. As a nation, we must provide a permanent solution to ensure these young people can stay here and continue contributing to our nation’s future.

At the University of Maryland, more than 100 DREAMers and DACA students face the future with dread. The same is true for countless others around Maryland and the nation. These students work hard — many juggling both coursework and employment — while constantly facing challenges associated with their immigration status. They have done everything by the book in the pursuit of productive lives. Now, we must do all we can to assure them that we have their backs.

Not only is it the wrong thing to do to kick thousands of hardworking young people out of the country and send them to places they don’t know, but it would also result in severe economic harm nationwide. According to the Center for American Progress, the state of Maryland would see an estimated annual loss of more than $509 million in the state’s gross domestic product. Many DREAMers are entrepreneurs and chose to build their businesses in Maryland communities — we should not be sending those entrepreneurs away.

Business leaders throughout the U.S. recognize the innovation and economic productivity DREAMers bring to their communities and support allowing them to stay. Deportation would have a severe impact on local economies, and we can’t afford to lose the innovative talents of DREAMers.

To us, the injustice and waste of sending these talented, productive young people away from the communities they call home is simply wrong. That’s why we both support the passage of the DREAM Act in Congress. This legislation would give certainty to thousands of young DREAMers, allowing them to remain here and providing a pathway to citizenship. Together, we urge members of Congress to support this critically important legislation and give DREAMers assurance they can remain here and continue contributing to our nation.

According to a poll conducted by The Washington Post and ABC News, 86 percent of Americans agree with us and support a solution to allow DREAMers to remain in the U.S.

We both remain firmly committed to protecting DREAMers throughout Maryland, and support establishing a pathway to citizenship for them. This is consistent with the values our nation was built upon. They came through no fault of their own. This is their home, and they want to build lives of consequence here. We should give them this opportunity.

They are future leaders of our country, and we will not rest until the DREAM Act is passed and they have a permanent solution that allows them to continue to build their lives in the country they love and call home.

Wallace Loh is the University of Maryland’s president. Steny Hoyer is the U.S. representative for Maryland’s fifth congressional district, which includes this university.