This group is investing in UMD-based ventures, from wood stoves to tea 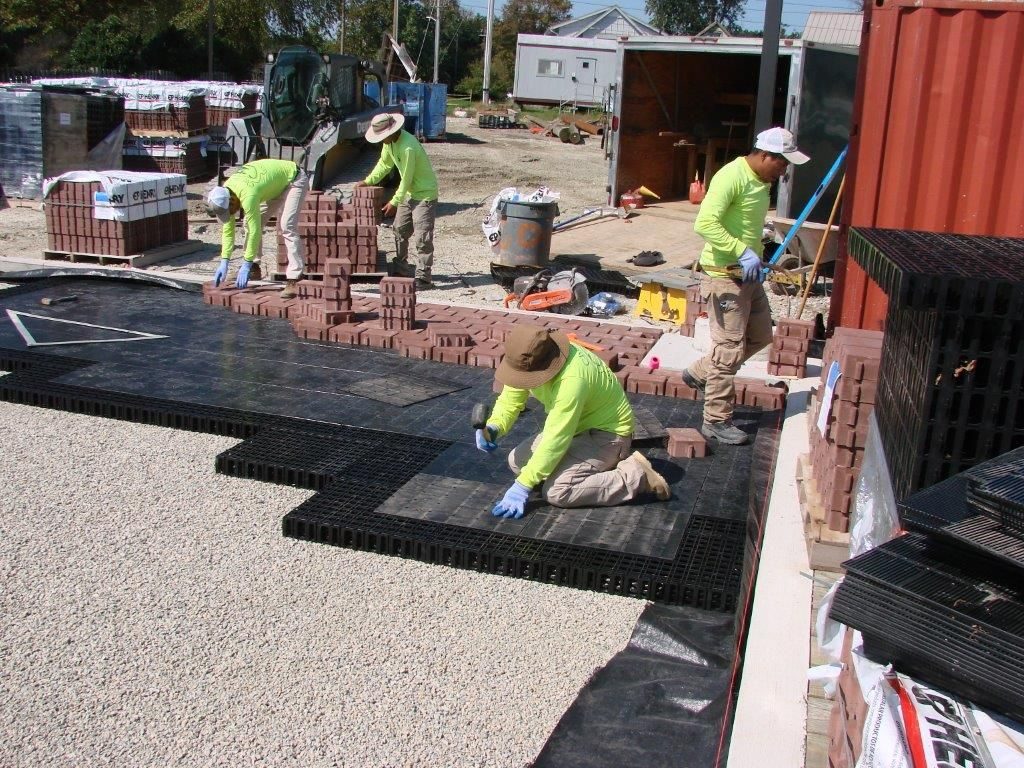 Workers install the PaverGuide environmentally friendly stormwater management system beneath pavers. PaverGuide is one of the companies awaiting funding from a university system investment group. (Courtesy of Charlie White)

Two startups tied to the University of Maryland have received thousands of dollars in investments from a university system fund, and two more could soon.

A wood stove manufacturer and an aerospace engineering firm started by university graduates both got investments from the Maryland Momentum Fund in the last year.

Two more companies — one that produces a caffeinated tea called Zest Tea and another that makes an environmentally friendly stormwater capture system — are waiting on money from other investors before they’ll secure the system funds.

The University System of Maryland launched the MMF last March, and since then, it’s invested about $800,000 in three companies. To be eligible for funding, companies must somehow be connected to the system.

MF Fire, which created a technology that efficiently transforms wood heat into clean energy, was started by two graduates of this university’s fire protection engineering graduate program. MF Fire received $192,500 from the fund, which was critical for its initial growth, said CEO Paul LaPorte.

“Momentum funding has been really important for us getting us through our first couple sales seasons,” LaPorte said. “We’re in our third commercial selling season right now.”

MMF also helped them to secure roughly $1 million from outside investors.

“We’ve gotten additional support in the form of introductions and networking and helping weigh in on business strategy in some of the day-to-day challenges,” LaPorte said.

MMF was created to help companies through what Wise calls “the gap,” the period of time after companies start running out of their initial capital, and before they’re noticed by venture capital firms.

“You don’t want to see an idea die just because it can’t get the next step of funding,” Wise said. “That’s where we come in.”

The North American Wave Engine Corporation, which develops wave engines for jet propulsion applications, received $350,000 from the fund, and an additional million from co-investors. The company is led by CEO Daanish Maqbool, who earned his doctorate at this university’s engineering school.

Meanwhile, MMF is waiting for co-investors to commit to giving $650,000 to Zest Tea, started by graduates of this university, and $400,000 to stormwater management company PaverGuide, before they invest their $350,000 and $250,000 respectively.

PaverGuide’s system is made from recycled plastic that serves as a structural base for paving systems. It removes phosphorous, nitrogen, copper, lead and zinc from stormwater, said PaverGuide CEO Charles White.

“We’ll be getting salespeople in the Maryland area and then I will also be adding some inventory,” White said. “Eventually we want to start manufacturing in Maryland, create about 120 jobs in Maryland, and a lot of manufacturing would be done on the Eastern Shore, which needs jobs.”

White pitched these ideas to the advisory board in addition to an overview of his company.

“Once we pitched to the advisory board we heard that they were willing to invest pretty much the same day,” White said. “We’re about 80 percent of the way to raising the funds, but the first 80 percent came pretty quick.”

PaverGuide is eligible for MMF investment because it has an exclusive license agreement with the university on a filter medium for removing nutrients and metals from stormwater and because White is a joint patent holder with university researchers.