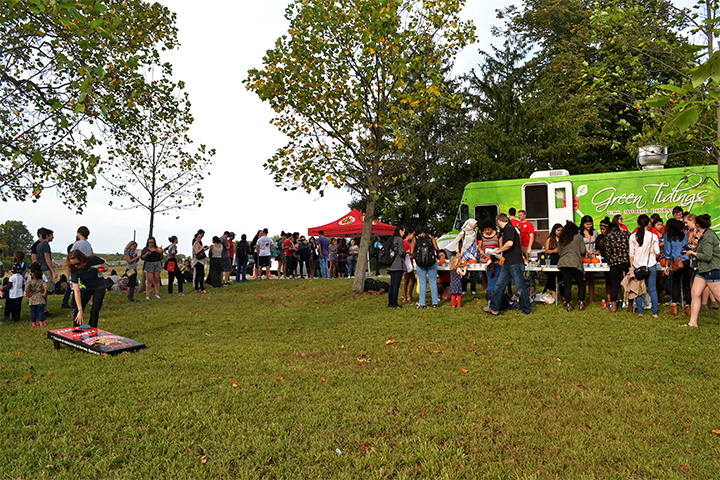 Last year, Terp Farm continued to grow and expand, producing 40 percent more crops and drawing more than double the number of students it had in 2014.

Terp Farm grew 11,233 pounds of vegetables, which went to university dining halls, catering events and donations, and brought in 156 students as academic visitors and volunteers — not including Fall Harvest Festival attendees — in 2015, according to its annual report, released Jan. 29.

In 2014, its first year in operation, the farm produced 6,842 pounds of crops and had 74 student visitors and volunteers.

Terp Farm, a facility in Upper Marlboro operated by Dining Services in collaboration with the agriculture and natural resources college, received a University Sustainability Fund grant in 2014 to finance a three-year pilot program.

“Our first year was a foundational time, in which we hired our lead agricultural technician and built some of our initial infrastructure,” Allison Lilly, Dining Services sustainability and wellness coordinator, wrote in an email. “[The year 2015] was a first full season, so that is why you see so much growth from the first to second year.”

One of the farm’s highlights this year was October’s Fall Harvest Festival, Lilly said. Almost 500 students and community members attended the event — a much larger number than Terp Farm staff had expected.

“That was definitely a huge step for the farm to get more exposure to students, where they got to sample food and listen to music and tour the farm and see where we were growing the food,” former intern and December 2015 graduate Karyn Owens said.

Student involvement has always been an important part of the program, and Anh Doan, a senior biology major and summer intern at Terp Farm, said the experience working there was beneficial.

“I can apply what I study in class and then I can apply it to the real world,” Doan said. “I also now know how to do the handling, packaging and delivering to the campus.”

The summer interns also were able to participate in an audit with the state Agriculture Department, Lilly said.

In the final year of the pilot program, Terp Farm has outlined its goals to transition into a permanent feature.

“We have to learn to adapt to grow food when students are there, which is not the summer, and that’s usually when farmers are growing the most food,” Owens said. “This last year, we were trying to figure out ways to produce more food and maximize production in the spring and the fall, when students are in class and will have the most impact.”

Produce grown at Terp Farm and served at the campus dining halls fulfills a major component of Dining Services’ Sustainable Food Commitment, which aims for local and sustainable food to make up 20 percent of dining hall food by 2020.

“By this past spring we started seeing our little tags in the dining halls, which was really cool,” Owens said.

Lilly said Terp Farm is also looking to bring more classes and volunteers to the farm and finish work on major infrastructure.