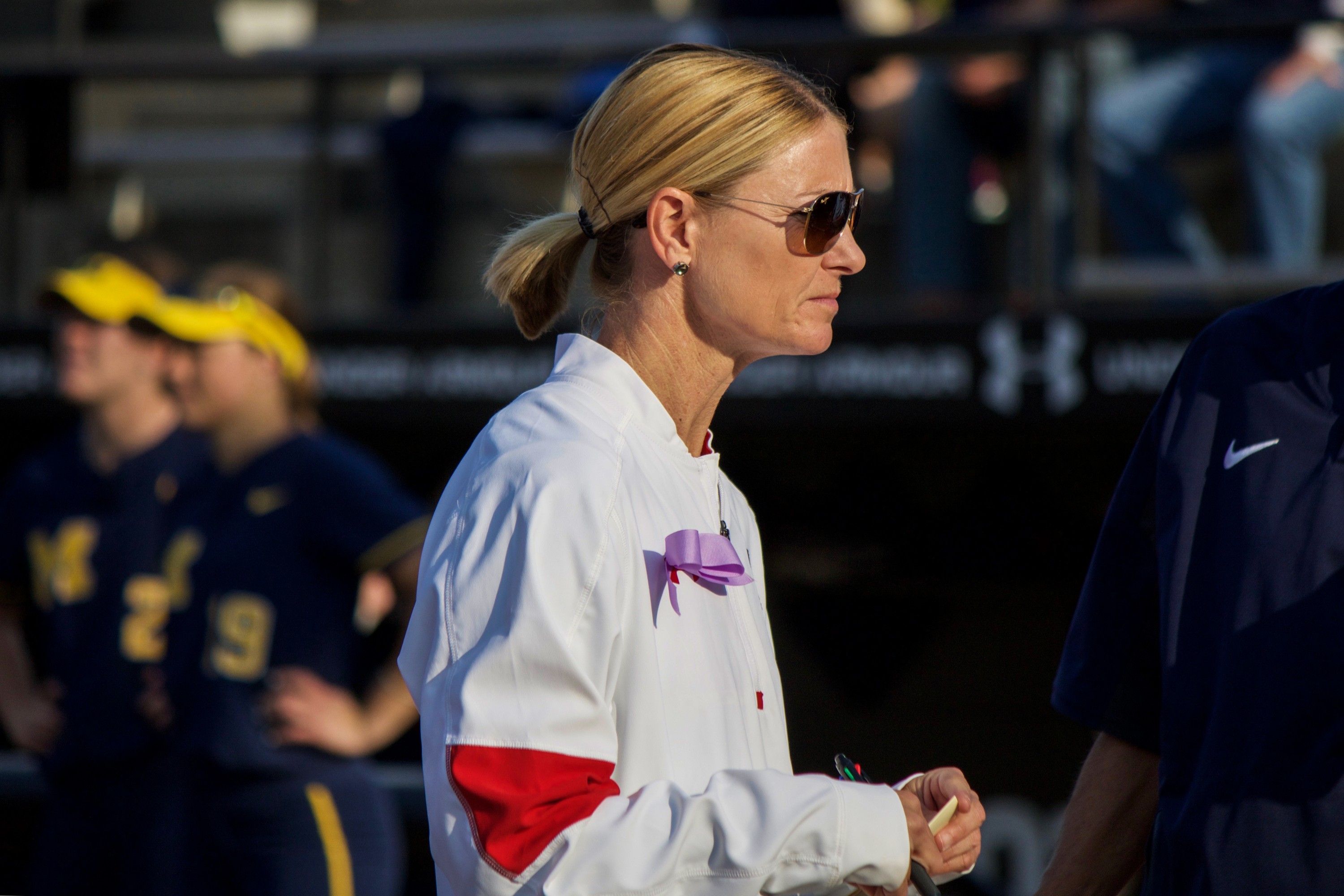 A year after outfielder Sarah Calta tore her ACL chasing a fly ball at Michigan, the senior delivered a key hit in the first game of Maryland softball’s doubleheader against Indiana.

Pitcher Tara Trainer had held the Terps to a pair of hits in six frames. But after outfielder Kassidy Cross singled to lead off the seventh inning, Calta brought her home with a two-out game-tying double.

However, Indiana responded in the bottom half of the inning to win, 2-1, on a walk-off sacrifice fly. In game two, the Hoosiers won, 5-0, even though the Terps recorded nine hits.

With the first matchup tied, 1-1, in the bottom of the seventh, Maryland (9-32-1, 2-12 Big Ten) committed an error to set up the walk-off. Indiana outfielder Kayla Mathewson hit a ground ball to second base, and when infielder Skylynne Ellazar flipped it to Jordan Aughinbaugh at first, the senior dropped it for her second miscue of the game.

That put a runner on third for the Hoosiers (21-25, 7-9), which catcher Bella Norton brought home with a line drive to center. Cross caught it, but her throw home drew catcher Kristina Dillard up the third base line, allowing the winning run to score.

Indiana infielder Taylor Uden, dashing home from third, edged toward the pitching circle to bypass Dillard’s tag attempt. Home plate umpire Eric Mandley deemed she was successful in doing so, but coach Julie Wright had a different view, arguing the call after the game.

The Terps drew six walks in the loss. But they went 2-for-15 with runners on base and 0-for-6 with runners in scoring position, squandering a host of opportunities.

Trainer walked the bases loaded in the sixth inning. But trailing by one, pitcher Madison Martin swung at the first pitch and flew out to right field to end the threat.

In the circle, Martin allowed five hits and two runs while recording one strikeout and a walk. But she threw a wild pitch in the fifth to score Indiana’s first run.

By the third inning of game two, Maryland surpassed its game one hit total. But the Terps again struggled to drive in runners, leading to another defeat.

In the first, Uden hit a two-run homer to give the Hoosiers an early lead. Pitcher Hannah Dewey allowed two walks and a single to load the bases after the blast, but a lineout ended the frame. Then, in the second, infielder Erin Lehman tripled to lead off the frame, and outfielder Rebecca Blitz hit an RBI single off infielder for a 3-0 advantage.

The Hoosiers added two more runs in the fifth. Uden singled and infielder Rachel O’Malley scored her with a double. Infielder Aimilia McDonough hit an RBI single to push the lead to 5-0.

Maryland missed chances to score in the second and fifth innings. With the bases loaded in the second after three consecutive singles, designated player Henderson struck out and Strange flew out to deep left field.

In the fifth, Henderson reached on an error and Strange followed with a single. But Calta sacrifice bunted despite singles in her previous two at bats, and infielder Anna Kufta and Ellazar failed to reach base, ending the threat.

With two outs in the seventh, Strange doubled and Calta singled for her third hit of the game and fourth of the day. But Kufta went down on strikes to seal the defeat.

Maryland has an off day on Saturday due to inclement weather. The Terps will close the series against Indiana on Sunday.