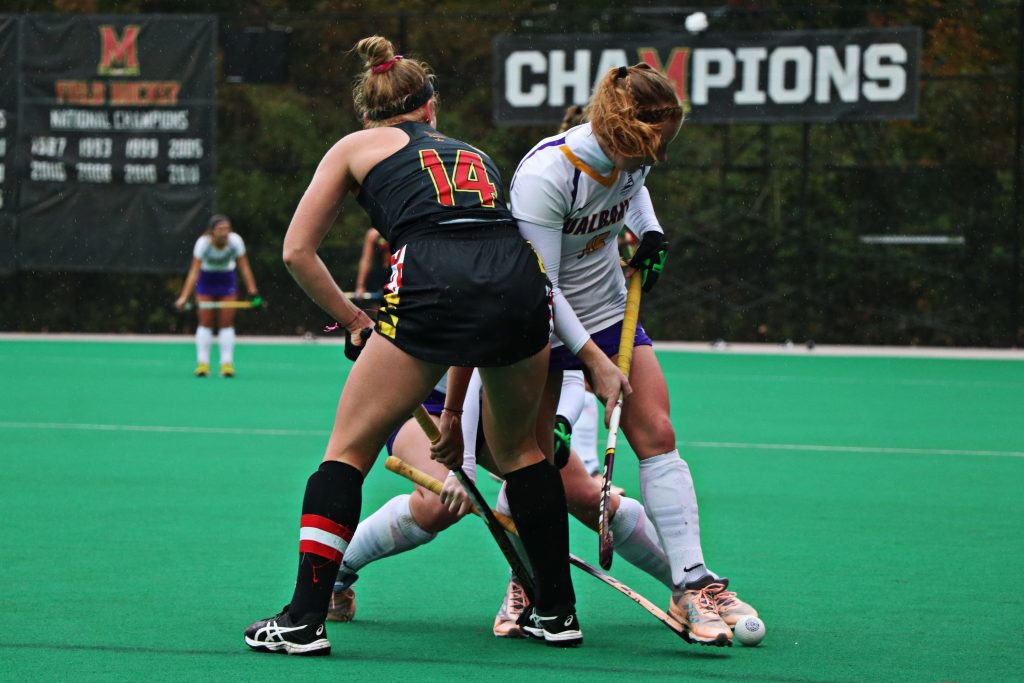 The Maryland field hockey bench exploded with cheers and laughter in the 42nd minute of its first-round NCAA tournament game against Albany.

Less than a minute earlier, the No. 2 Terps had trailed, 1-0. But now, they had a 2-1 lead, and they seemed ready to put the nervous start to the tournament behind them.

About five minutes into the second half, the Terps earned a penalty corner, and defender Bodil Keus hammered a hard shot from the top of the circle into the net.

Shortly after, the Terps forced a turnover and quickly pushed the ball upfield. Forward Linnea Gonzales passed to Brooke DeBerdine on her far right, and DeBerdine slipped the ball past Albany goalkeeper Melissa Nealon. Forward Bibi Donraadt was waiting there to easily tip the ball into the empty net.

After a slow start, Maryland used those scores to take a 2-1 victory over Albany and move to Sunday’s second round, where it will face either No. 5 UConn or No. 11 Rutgers.

“We were … relieved that we got that back,” defender Hannah Bond said. “We could feel it on the field that we had got our game back together. … It just came together to score those goals.”

But it wasn’t always pretty. About seven minutes into the game, Albany was awarded its second penalty corner. Goalkeeper Sarah Holliday fell to the ground and stopped the initial shot, but Great Dane defender Viol Von der Muhlen grabbed the rebound and snuck the ball into the left corner to give her team a one goal lead.

Maryland ended the first half with four shots, only one of which was on target, while Albany had three shots and two on goal.

The Terps have talked all season about avenging last year’s national title game loss, and after intermission, they seemed determined not to allow those hopes to be dashed so easily. Maryland took control of possession and pace and were rewarded with the two quick goals. The Terps outshot Albany, 8-4, in the second half.

“‘The biggest thing is — always in the NCAAs — it’s knockout. And when it’s done, you look back and you ask yourself, ‘Do you have any regrets?’” coach Missy Meharg told her team at halftime. “We would have had them, very big [ones].”

The Great Danes had the chance to equalize with a few penalty corner chances late, but Maryland fended them off for the victory.

But for one of the best programs in the country, an uneven first-round victory is no cause for celebration.