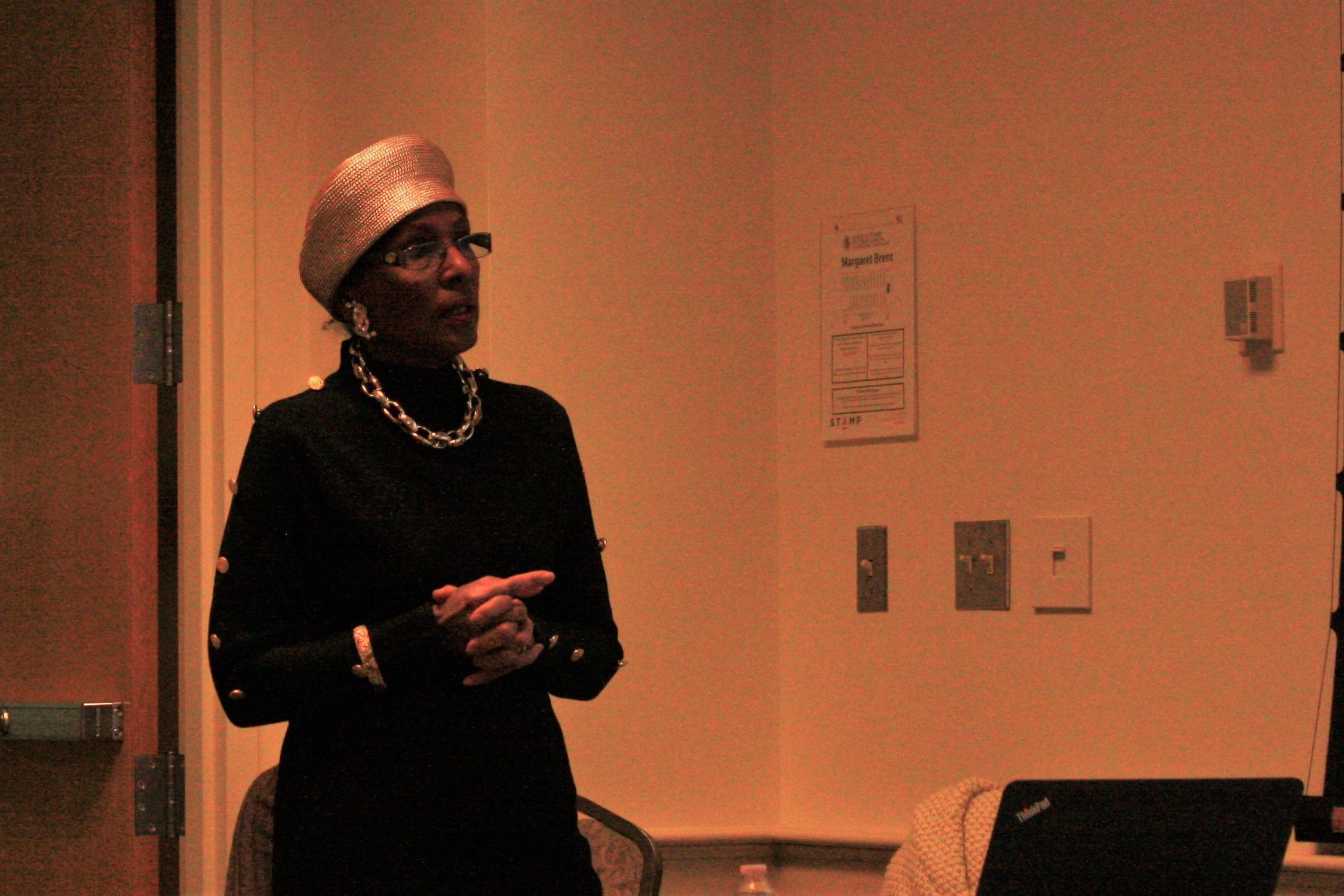 Barbara Talley, a self-proclaimed life coach, author, public speaker, and poet, and her daughter Radiance Talley, a senior communications major at the University of Maryland, used videos, photographs and other media during a “melanin-rich” presentation for Black History Month on Tuesday Feb. 19, 2019. (Photo By Lillian Goodwin/For The Diamondback)

In honor of Black History Month, a mother and daughter sought to provide a “melanin-rich” history through a multimedia presentation at the University of Maryland on Tuesday.

Barbara Talley, an author, public speaker and poet, and her daughter Radiance Talley, a senior communication major, used videos, photographs and other media to highlight everything from melanocyte cells — the cells responsible for determining skin color — to the inventor of potato chips.

“The Melanin Rich People’s Story and Contributions to Humanity” was hosted by the Baha’í Club, a student group that aims to “foster unity among different racial, ethnic and religious groups on campus,” according to the group’s mission statement.

“[In] a country that continues to oppress and denigrate its people of color, it’s important to empower melanin-rich individuals to feel proud of their identity, history, and legacy in honor of Black History Month,” Radiance Talley, the chair of the Baha’í Club, wrote in an email. “Our textbooks and history classes are very whitewashed in the US, so it’s important for people to know that our story started before slavery.”

Barbara Talley said her goal was to show that Black History Month is more than the handful of names people learn in school.

“There’s a list of 10 people … that people will learn about during Black History Month, and that’s it,” she said. “Many times when we have black history, they show the dogs, the civil rights. And our story didn’t start there. I wanted to show a rich culture and history.”

The presentation offered an all-encompassing look at not only race as a concept, but the science and biology of melanin itself. The Tallleys combed through prominent black figures going back several millennia, like Mansa Musa, a West African emperor who was said to be the wealthiest person to ever live, and Otis Boykin, the inventor of a pivotal electrical resistor.

This is not the first time Barbara Talley has spoken on race at this university. Last November, she hosted a talk on the implications of race as a social construction. She has also given multiple speeches on these topics nationally.

Sophomore journalism major Keombré Kennediekendra McLaughlin said she didn’t know much of the material the Talleys talked about but identified with its message.

“If we don’t know this history, it’s easy to assume that African-Americans have not contributed anything to society beyond slavery. And that’s a toxic mindset,” McLaughlin said. “Every day, I see these things in action, I see these systems of oppression, and they work against me. I mean, I’m black.”

Gabriel Henderson, a junior public health major, said it was important not just for black people, but for everyone, to learn about the history of black culture, including issues like racial discrimination and social alienation.

Barbara Talley said she hopes the talk inspired attendees to pass on the knowledge they learned.