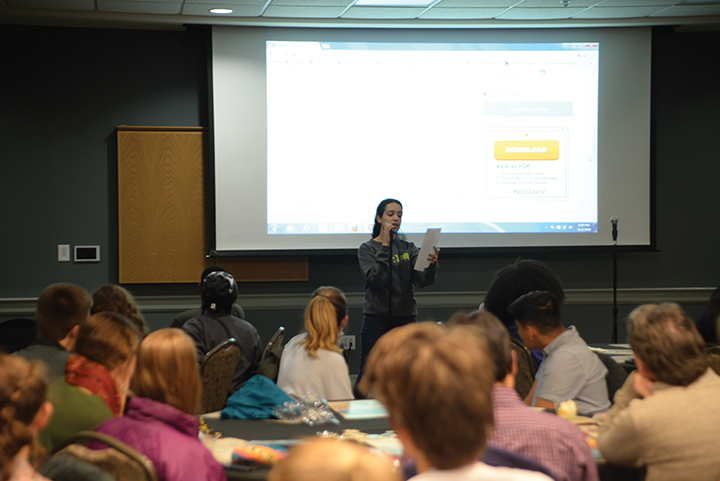 Student performs at the Native Roots Monologues event in the Charles Caroll Room in Stamp on Tuesday, November 1 2016.

For many, Columbus Day does not mark the discovery of the Americas, but rather the arrival of an explorer who ignited centuries of violence toward indigenous groups.

In response to the controversial holiday, the University of Maryland’s Graduate Student Government passed a resolution Friday urging university administration to change Columbus Day to Indigenous People’s Day on the university calendar.

In a moment of solidarity with the American Indian Student Union — who started a petition last month to change the holiday’s name — the resolution aims to commemorate the history of Native American culture rather than celebrating Christopher Columbus’ contentious legacy, GSG President Stephanie Cork said. They plan on reaching out to partner with the Student Government Association as well.

“This is something we would like the administration to notice,” Cork said. “We need to do more than just symbolic gestures … and so, changing this name would be a nice moment to demonstrate that American Indians are respected on campus.”

The American Indian Student Union’s petition requests that this university remove the current holiday from all of its materials. At the time of this publication, the petition had garnered 162 signatures.

“One cannot fully support indigenous students and communities at UMD when they are faced with an annual reminder of a ‘holiday’ that represents the pain, genocide, and trauma of indigenous peoples,” the petition reads.

The union launched the petition Oct. 10 — Columbus Day — to highlight that this holiday is far from a celebratory day for indigenous people, said Naliyah Kaya, a coordinator at the Office of Multicultural Involvement and Community Advocacy.

“It’s a very painful slap in the face to have that celebrated at your university,” Kaya said. “Students are hoping that people will really unite and realize what has happened and what’s continuing to happen to native and indigenous people here.”

Although the GSG resolution requests that this university formally change Columbus Day on the university calendar to Indigenous People’s Day, it may be outside of this university’s authority to change the name of a holiday, said Betsy Beise, the associate provost for academic planning and programs.

“It varies as to whether [this changes at] a city, state or a university — everyone’s moving at their own pace — so we thought why not start at [this university], then College Park, then Baltimore City, and then maybe the state of Maryland,” Kaya said.

In the last two years, prominent U.S. cities such as Phoenix, Seattle and Denver have joined the growing movement across the nation to officially celebrate Indigenous People’s Day.

While some may claim these groups are oversensitive to the holiday’s name, small reminders of oppression can lead to psychological trauma in indigenous people who grow up in areas that celebrate Columbus Day annually, said Casique, a junior journalism major.

“[Celebrating Columbus Day says], ‘We do not care about your history or about what’s going on in indigenous communities,'” Casique said. “Even though this might seem like a really small thing, in changing the name, the impacts and the effects that it has are even bigger.”