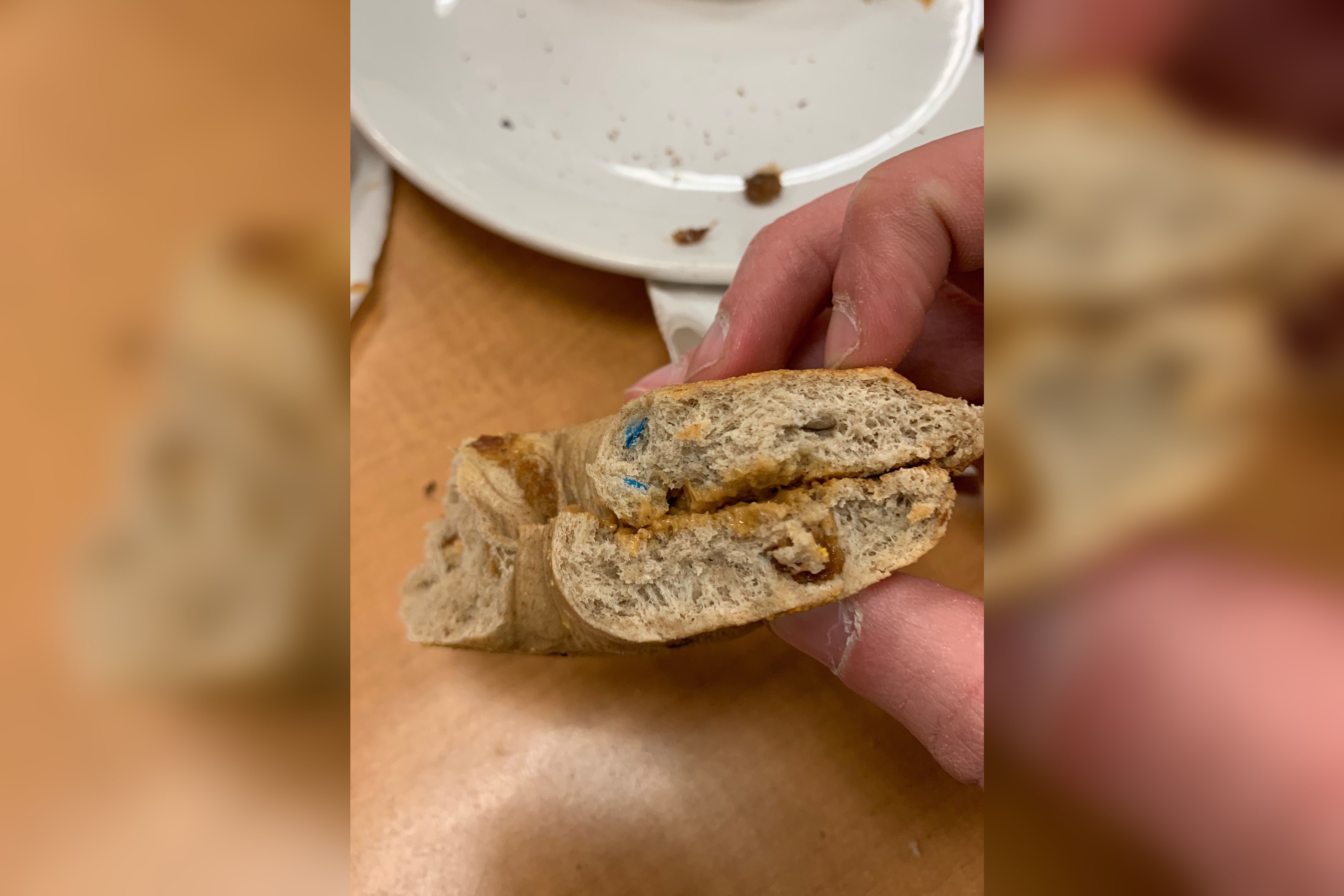 A UMD student's morning was disrupted when he found a blue spot in his cinnamon raisin bagel. (Photo courtesy of Harry Rentzeperis)

Before his calculus class Tuesday morning, University of Maryland student Harry Rentzeperis stopped by the North Campus Dining Hall to grab something to eat. Since the dining hall didn’t have plain bagels — his usual staple — he chose a cinnamon raisin one instead.

But when the freshman management and marketing major took a bite, he noticed a “vibrant blue” spot nestled in the bread.

While Rentzeperis said this discovery was “kind of gross,” he still ate the other half of the bagel, unfazed — but not before snapping a photo to share on Reddit.

“I didn’t realize that the cinnamon raisin bagels at the diner are supposed to be bright blue inside…” he wrote.

Reddit users replied, “That’s protein my dude,” and “Are you sure that’s not a blueberry?” among other comments.

“Our responsibility then is to hold them safely and to make sure we serve them [at] appropriate times so that they’re fresh,” Hipple said. “If something like [the blue spot] is inside a prepared product, we have no way of knowing it’s in there.”

“As we looked at the picture, as best we can determine — and this is our senior executive chef and our culinary staff — we believe it to be a piece of a blueberry,” Hipple said. “Now, that was clearly a cinnamon raisin bagel, but it’s made by Whatsa Bagel, and they do blueberry bagels in the same machinery that they do the cinnamon raisin bagels.”

While Dining Services has contacted Whatsa Bagel, they had yet to receive an explanation as of Wednesday morning.

Hipple said the protocol to responding to this kind of incident — if notified “on the spot” — is to clear out the case of bagels on display, and check the product for any other problems. If Rentzeperis had notified dining hall management, they could have taken the bagel back to Whatsa Bagel to find out the cause and a solution.

“Several hours later, we’ve likely distributed all of the bagels,” Hipple said. “We would check the dates on the cases, and we would make sure to very carefully recheck our handling procedures, but we would not automatically discard all of the bagels from that supplier.”

Rentzeperis did not receive a response from Dining Services as of around 8 p.m. Tuesday. While he said the problem was most likely a manufacturing error, he added that he would still appreciate an explanation from the department.

“It’s kind of like how when you have a bad parking ticket and someone posts it on Reddit, and then the parking ticket people respond,” he said. “I kind of want that type of experience.”

Still, Rentzeperis said he understands that because Dining Services is responsible for producing large quantities of food, mistakes are bound to happen.

The bagel incident follows similar dining hall mishaps last semester — a student found a caterpillar cooked on her broccoli in late November, and another found a nail head in his salad in September.

“I’m not sure if it’s an issue of Dining Services as a whole,” Rentzeperis said. “But UMD has become kind of notorious for having odd stuff.”