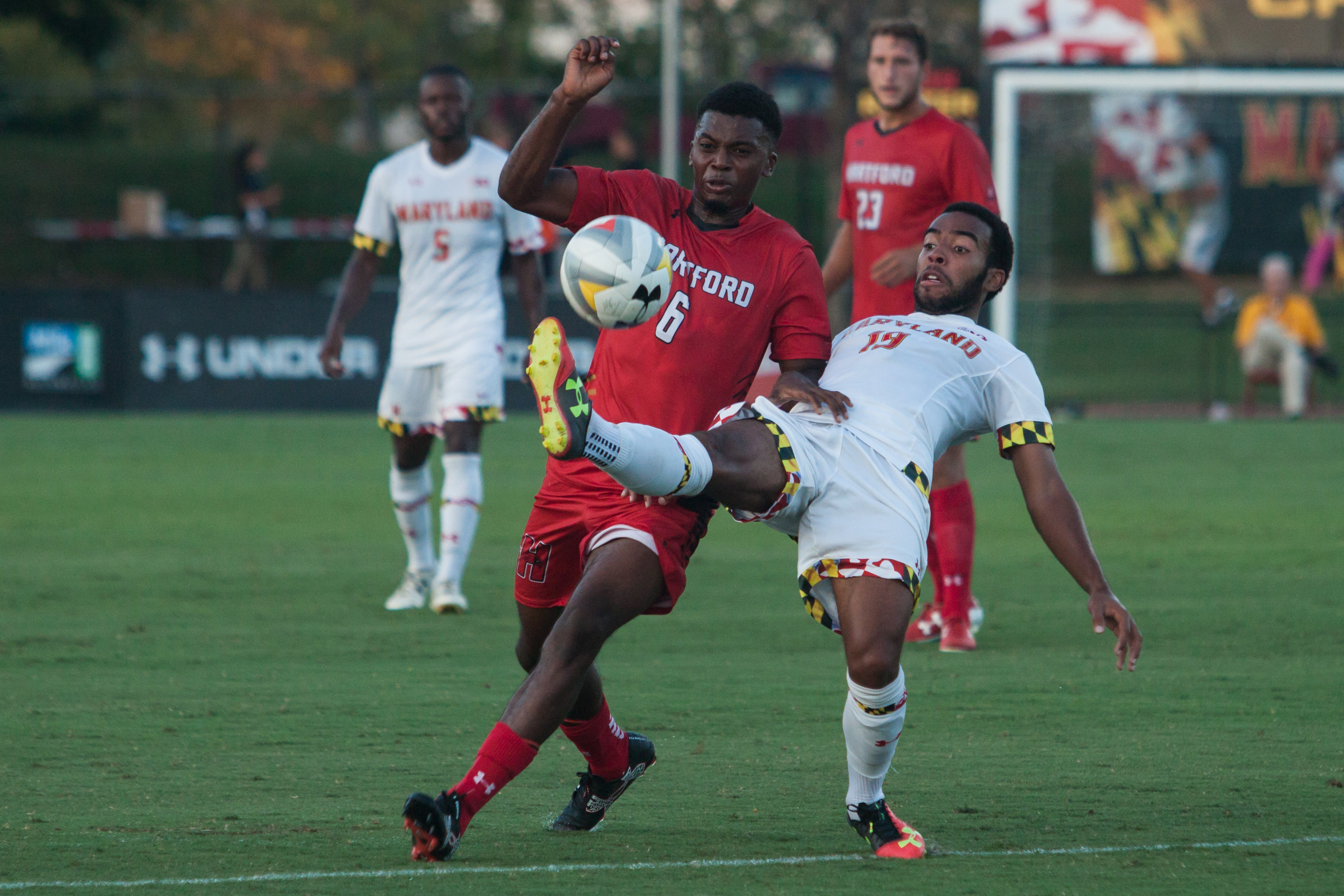 Midfielder Erik Williamson reverses the direction of the ball in Maryland's 5-0 victory over Hartford at Ludwig Field on August 29, 2016. (Reid Poluhovich / The Diamondback)

Maryland men’s soccer’s Eryk Williamson played midfield growing up, so when coach Sasho Cirovski moved him from forward to midfield this season, the sophomore reminisced about his prior experience.

Last year, Williamson starred for the Terps up top, but Maryland lost key players in the midfield this offseason, so Cirovski converted him to attacking midfield. Though Williamson’s transition hasn’t always been smooth, Cirovski said he’s progressing each match.

Despite missing most of two games because of a head injury, Williamson’s five points are tied for third-most on the team, and the coach deemed the midfielder’s performance in the Terps’ 2-0 win over Michigan State on Friday his best game of the year.

As Williamson continues to improve, Cirovski said, so will the No. 1 Terps.

“Eryk Williamson is a fantastic player,” Cirovski said. “He’s an explosive, dynamic, attacking talent. He’s capable of breaking a game open in an instant. He looked real fluid and comfortable, and his work rate was off the charts last week. He’s settled into the best spot on the field for him right now.”

Last season, Williamson started 21 of 23 matches and broke out in the postseason. He recorded his six goals and two assists in the squad’s final seven games.

The Terps have started each 2016 contest with only two forwards, though. Forward Sebastian Elney, who led Maryland in scoring last year, locked up one spot, and forward Gordon Wild, who leads the Big Ten with eight goals after transferring from South Carolina Upstate, claimed the other this summer.

Meanwhile, former midfielders Mael Corboz and Tsubasa Endoh, who combined for 32 points in 2015, graduated this offseason. Cirovski has used Williamson, who plays attacking midfield on the U-20 Men’s National Team, in their roles.

“Eryk is one of the best players in the country,” Wild said Sept. 2. “We’re slowly getting a really good relationship together.”

Cirovski has moved Williamson around the midfield while trying to find his fit against opponents’ formations.

In the Terps’ 2-1 win against then-No. 24 Georgetown on Sept. 2, Cirovski moved Williamson to left wing at halftime to spread out Maryland’s attack. Ten minutes into the frame, Williamson scored his lone goal of the season off a cross from midfielder Amar Sejdic. The 5-foot-9, 154-pound Williamson stuck the ball past the Hoyas’ charging goalkeeper to spark a celebration from The Crew.

“We kind of tried different positions in practice, and he throws me out there sometimes,” Williamson said after the match. “Me and Amar have a really good connection, so right when we switched, I told him, ‘Hey, I have a little more space, if you need to put me in a space to run, I’ll do it.’ That’s what happened. It’s something we do every day in practice.”

Williamson played four minutes against South Florida on Sept. 5 before a Bulls defender ran into him, making contact with his head. The Alexandria, Virginia, native sat out the remainder of the contest and missed Maryland’s following match against Indiana.

Though the Terps tied the then-No.4 Hoosiers, 1-1, Maryland relied on a late equalizer from defender Alex Crognale. While it was frustrating to watch his squad lose the possession battle against Indiana, Williamson used halftime and overtime breaks to encourage his teammates to stay calm, reminding them they were talented enough to win the contest.

When Williamson returned against Rutgers on Sept. 13, he made a difference on the field.

In double overtime, Williamson sent a cross to Elney. The Scarlet Knights goalkeeper blocked Elney’s look, but midfielder Jake Rozhansky netted the rebound for the game-winner.

Then, against Michigan State on Friday, Williamson received a cross in the box from defender Chris Odoi-Atsem in the second half. He one-touched the ball toward Rozhansky on the right goal post for his third assist of the year.

“When Eryk gets the ball, I already have to be ready to move and be ready for his pass,” Rozhansky said. “He has an amazing passing ability. He can put the ball right at my foot. When he’s on the field, you can just see his poise on the ball.”

Still, Cirovski said Williamson needs to become more comfortable with the spacing and responsibilities of playing midfield. Williamson played a huge role in the Terps’ 2015 postseason run, and Cirovski expects the same this season.

“That kid’s soccer knowledge and his vision on the field is second to none,” goalkeeper Cody Niedermeier said. “He has to be the best in the country. What he does with the ball really just defines who he is.”