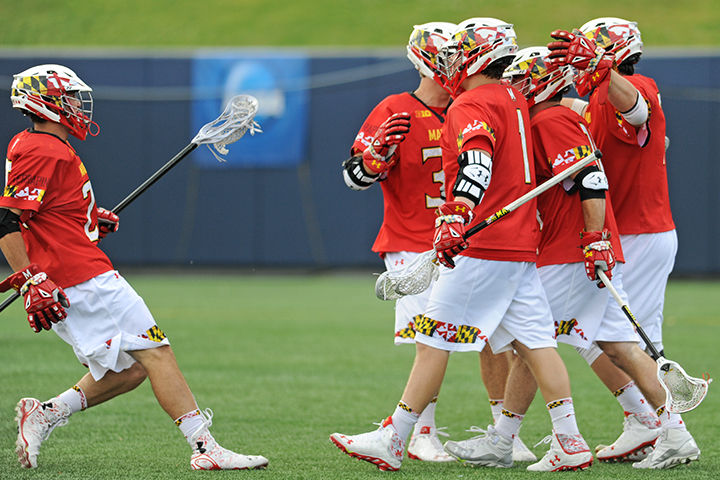 On Feb. 11, Terrapins men’s lacrosse longpole Mike McCarney was in an Apple Store trying to get his computer fixed when he received a text from coach John Tillman.

He learned the team’s season opener against Navy, scheduled for Feb. 13, had been postponed because of the predicted freezing temperatures and wind. The Terps would have to wait an extra week to kick off their 2016 campaign.

McCarney and the rest of the No. 4 Terps had been eager to play the Midshipmen, and that energy has only increased this week. But the team has tried to keep its emotions in check as it prepares to face High Point on Saturday in Maryland Stadium.

That mindset mirrors how the coach prepares his players to handle everything, setbacks and triumphs alike — Tillman doesn’t want the Terps to be “emotional yo-yos.”

So rather than lamenting the disappointment of extending their offseason seven more days, the Terps viewed the schedule change as an extra week of preparation before their quest to return to the NCAA championship begins.

Tuesday and Wednesday are typically the team’s most physical days of practice before a Saturday game. The Terps often go through six-on-six drills that focus on ground balls and fundamental work before moving into scouting their upcoming opponent.

While High Point won’t have recent film to watch on the Terps, Tillman and his squad can study the Panthers’ first two outings — losses to No. 3 Duke and Boston.

Tillman also referenced High Point’s NCAA first-round loss to Towson in 2015 as a basis for his research. The Panthers led the Tigers 5-0 before suffering a 10-8 loss in the 4-year-old program’s first-ever NCAA tournament appearance.

“They’re solid everywhere,” Tillman said. “Everywhere you look at that team, they have guys that are scorers.”

The Terps have also used the extra time as a way to ensure their lineup is healthy.

The coaches held a few players out of preseason scrimmages while the Terps recovered from offseason injuries, but Tillman said all of his expected contributors — aside from longpole Matt Neufeldt, who played in all 19 games last year but is sitting out this season with an ACL injury — should take the field against the Panthers.

In the absence of some of those veterans, though, the Terps’ younger players saw extended action.

Attackman Timmy Monahan, listed at 11th in Inside Lacrosse’s 2015 Power 100 freshman rankings, was one. The 6-foot-1 Gonzaga product grew up as a fan of the Terps program, often coming to games while in high school.

His Terps career will start one week later than he expected.

“I think about walking on the field and seeing my parents in the stadium, seeing all my friends and family,” Monahan said. “I’m expecting it to be awesome.”

Monahan isn’t the only Terp looking to cement his role. Midfielder Pat Young, a UMBC transfer, and defender Greg Danseglio, a transfer from Virginia, are looking to prove themselves to Tillman.

Danseglio and McCarney are two players Tillman said could help fill Neufeldt’s spot on the wing during faceoffs. Still, the Terps maintain they won’t know how their lineup will unfold until they get live-game experience.

The weather forecast calls for warmer temperatures this weekend. Plus, McCarney’s laptop is fixed.

So the Terps are eager to take the field and start answering some of the questions surrounding their team Saturday afternoon.

“We played scrimmages, but it’s hard to really replicate the real-game atmosphere,” McCarney said. “[Now] there’s real consequences, playing against another color out there.”