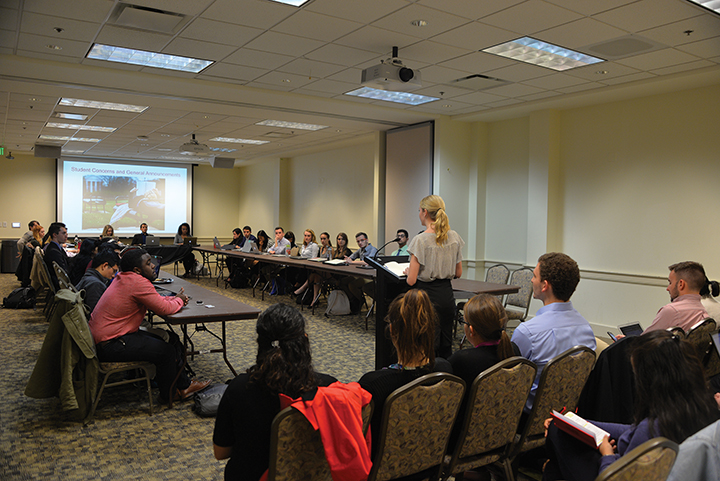 The SGA voted unanimously Wednesday night to present a plan to its Police Advisory Review Council urging University of Maryland Police to implement a “philosophy” of community policing with students and faculty at this university.

The plan encourages University Police to “be more involved with students and faculty on campus by expanding foot patrol and bike patrol of officers, further advertising the Ride Along/Walk Along Program” and hosting more events, according to the resolution. University Police has agreed to work with PARC to make sure this happens.

Bill sponsor Gabriel Wach, the undergraduate studies representative, said these policing efforts may encourage more direct interactions with students, “Whether it be … coming into residence halls or hosting events like Breaking Bread,” a discussion between police and students that gives students the opportunity to raise concerns to police. A Breaking Bread event featuring free Chick-Fil-A took place in Stamp Student Union in October, and more breaking bread discussions have already been scheduled, University Police spokeswoman Sgt. Rosanne Hoaas said. The next one will be in May, she noted.

During Wach’s freshman year at this university, the sophomore government and politics major walked by police officers with drug-sniffing dogs at a sporting event. The situation reminded him of police in his hometown, he said.

“I grew up in Baltimore City, so I know how little of a relationship a community can have with the police,” Wach said. “I don’t want students coming on this campus to get that impression that the police aren’t here for them and just act as an enforcement unit.”

Other students on the campus have raised concerns to Wach that there is barely a relationship between them and the police department. Student representatives from groups including MaryPIRG and this university’s NAACP chapter, for example, said they only see police when there is a sporting event or when something bad happens, Wach said.

Wach said he has also spoken with University Police officers, who said they are in favor of continuing to expand their ongoing efforts within the community.

“A lot of them are former students here and they love this campus and love the students,” Wach said. “Anything that helps getting students to interact with them they are for.”

The meeting between SGA members and police before presenting the resolution was necessary so that the two groups were on the same page, Hoaas said.

“Partnerships and collaborations are the building blocks to strengthening the foundation of community policing,” said University Police Chief David Mitchell in a statement.

Ja’Nya Banks, director of the SGA Diversity and Inclusion Committee, would like to see more in-depth discussion between students and police to clarify the significance of certain policies and rights, she said.

“A lot of students have a vague image of the police department and what they do,” said Banks, whose committee oversees PARC. “If you don’t know what the rules are when it comes to getting in trouble or protesting, it may lead to assumptions and frustrations with what is happening.”

At the March meeting, the two groups discussed topics such as how police work with U.S. Immigrations and Customs Enforcement and how they handle cases of marijuana in on-campus residences. Police updated the council as well that nearly all officers had received diversity and implicit bias training in wake of the May 2016 pepper spray incident, where police used pepper spray during a graduation party of predominantly black students.

University Police have been making an effort within the past year — including through their growing collaboration with PARC — to become a more approachable police force despite being responsible for off-campus policing as well, said A.J. Pruitt, SGA’s Student Affairs vice president.

“Because they have joint jurisdiction over College Park, people sometimes forget that and don’t understand why they aren’t spending all of their time on campus,” Pruitt said. “I really think they’ve done a lot of work and this is a possible next step,” he added.

While the plan is focused on encouraging police to make greater efforts to connect with the community, creating better relationships between police and students is a “two-way street,” Wach said.

“It requires efforts not only by police themselves but by students,” Wach said.

Banks said students should take advantage of events with police presence by approaching police and expressing concerns they may have.

“We should not just show up for free food or ice cream,” Banks said. “There aren’t that many times when you can just go up to an officer and say how you feel.”