Once again, Youssif Hemida was the lone bright spot of an ugly year for Maryland wrestling 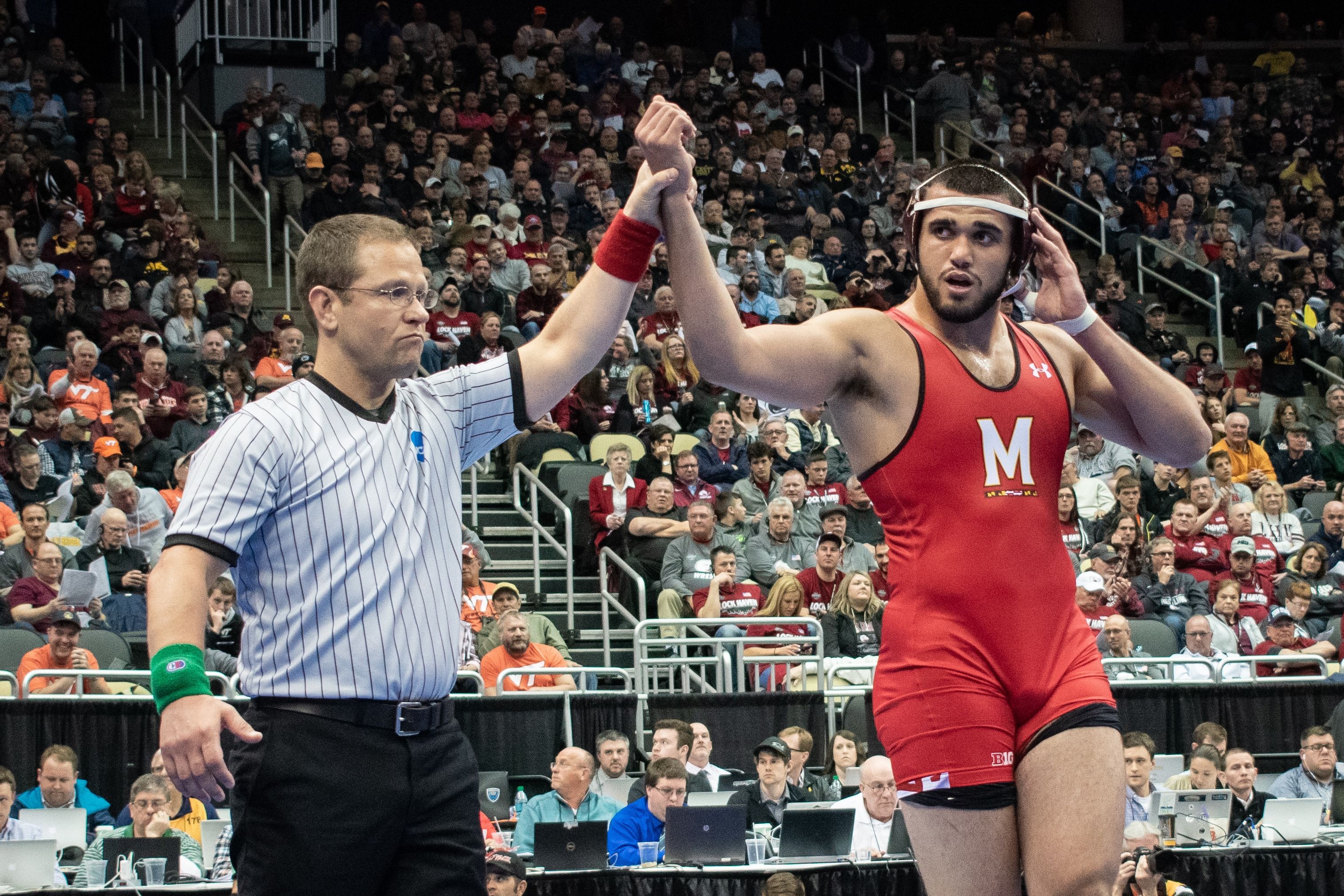 Heavyweight Youssif Hemida gets his hand raised after he takes down Sam Stoll in the NCAA Tournament round of 12 in PPG Paints Arena on March 22, 2019. (Tyler Ecker/The Diamondback)

Back in November, Maryland wrestling coach Kerry McCoy was optimistic about his team’s chances in a loaded Big Ten.

The Terps entered the year with a miserable 1-36 conference record since joining in 2014-15, but with perennial powerhouses Penn State and Ohio State not on the schedule this season, there was hope that a better showing was on the horizon.

The team also returned its three NCAA qualifiers from the previous year — 141-pounder Ryan Diehl, 149-pounder Alfred Bannister and heavyweight Youssif Hemida. All three are seniors who had high expectations, and Maryland hoped they could help the program take a step forward.

Instead, 2018-19 was more of the same — if not worse — compared with previous years. While Hemida capped his senior campaign with the best postseason of his career, the team went just 2-12 with another winless Big Ten slate, Diehl ballooned to 157 pounds and was left off the Big Ten tournament roster, Bannister was inconsistent and McCoy announced it would be his final year leading the program.

“It was a tough year,” McCoy said. “I’m proud of my team because the effort was there, but a lot of things went against us.”

Before the dual season, Hemida took time off to represent the United States at the U23 World Championships in Bucharest, Romania. While there, he went on an impressive run that culminated in a silver medal.

After Hemida returned to the team, he sat out Maryland’s first three duals without any explanation. His understudy, Mansur Abdul-Malik, went winless, and the team as a whole was drubbed a combined 83-21 across the three meets.

“I always want to be out there wrestling for Maryland,” Hemida said. “It was hard watching my teammates compete without me.”

Hemida wasn’t the only Terp to find themselves sidelined for an extended period of time.

No injury was more notable than Diehl’s — even though it happened last year.

After undergoing surgery in the offseason, Diehl missed nearly the entire 2018-19 season. When he finally returned Feb. 8, he was fighting at 157 pounds and went winless in duals, not coming close to recapturing his 2017-18, 141-pound form.

With many upperclassmen battling injuries, Maryland relied on its youth with mixed results. But even if they didn’t always produce wins, the performances of wrestlers like sophomore like 141-pounder Danny Bertoni, redshirt freshmen 165-pounder Philip Spadafora and 184-pounder Kyle Jasenski was promising for a rebuilding program.

There were also flashes of brilliance from freshman 133-pounder Orion Anderson and sophomore 141-pounder Michael Doetsch.

“They’re taking their lumps. The conference is tough,” McCoy said. “This level is tough.”

It wasn’t nearly enough to carry the team through the Big Ten, though.

During the second weekend in February, Maryland visited the Midwest and was outscored a combined 93-0 by No. 4 Iowa and No. 8 Minnesota.

“It stinks,” McCoy said after the Golden Gophers beatdown. “Not only going out there and getting shut out, but getting shut out in back-to-back matches and giving up bonus points is not a fun deal.”

The Terps opened the year 0-8, with late-season nonconference wins over George Mason and Rider preventing the indignity of a winless dual campaign.

Hemida, too, provided Maryland some solace. After losing four consecutive duals in February, he closed the season stronger and backed that up in the postseason. He lost his first match of the Big Ten Championships, but wrestled back to finish third — the program’s highest finish since joining the Big Ten — and weathered an early loss in the NCAA Championships for a sixth-place finish, the best of his career.

“I put in a lot of work in this program. It’s pretty cool to know I did something special here,” Hemida said. “I wanted to win a national championship, but I’m happy. Not satisfied, but happy.”

Hemida was part of the first class that wrestled their entire careers in the Big Ten. With that group — and the head coach — gone, the Terps’ future is uncertain.

McCoy leaves behind a complicated legacy. He was a popular hire and had early success, winning ACC Coach of the Year honors three times. But with just one conference win in the five years since joining the Big Ten, many affiliated with the program believe it was time for a change.

“While looking forward to my next journey,” McCoy said, “I will cherish the memories and relationships that I have established here and will carry them with me.”