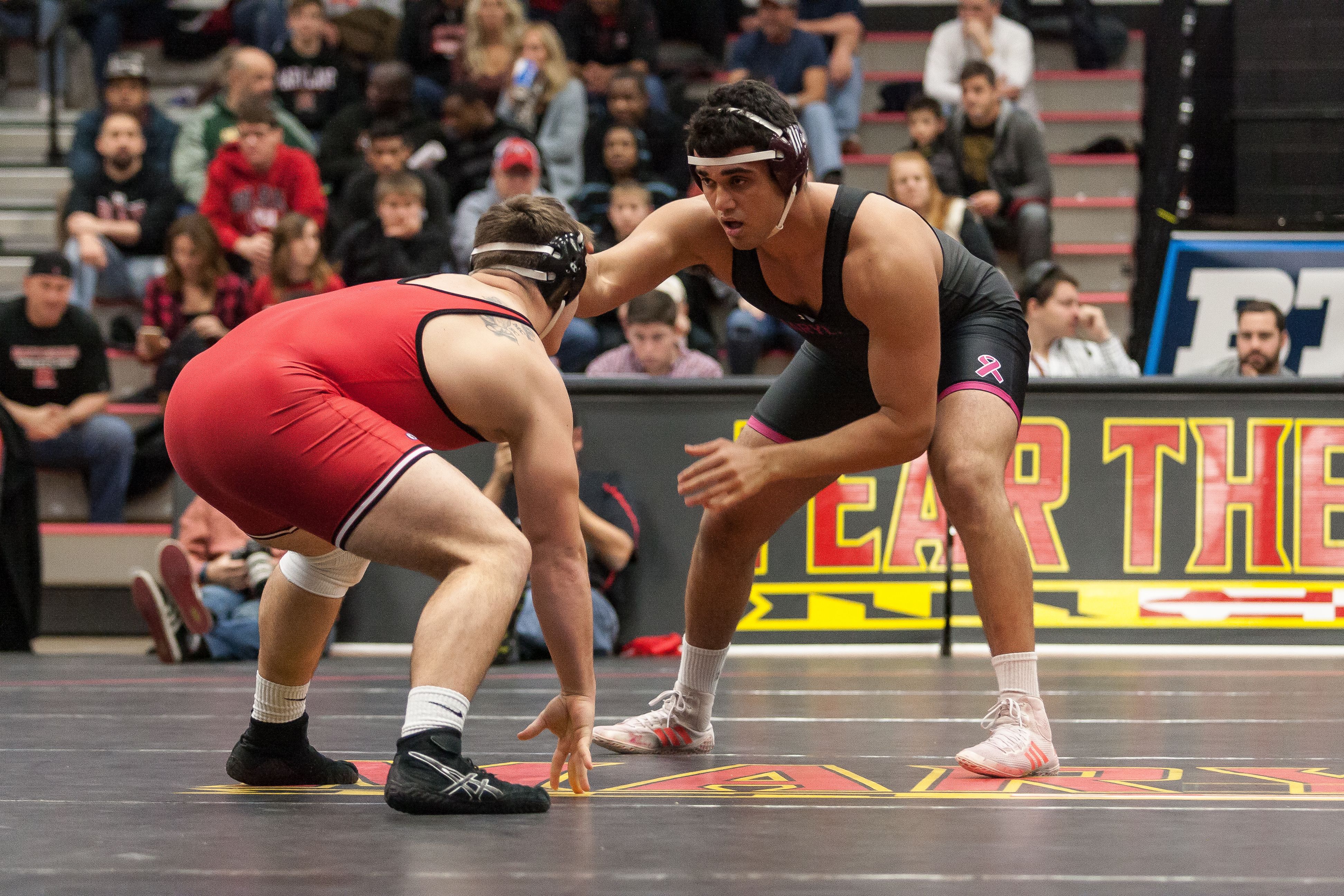 Sophomore Youssif Hemida lines up an opponent before a takedown in Maryland’s 21-13 defeat to Rutgers on Dec. 11 at Xfinity Center. (Marquise McKine/The Diamondback)

After a dominant victory over No. 23 Jeramy Sweany in round one of the NCAA championships, Maryland heavyweight Youssif Hemida found himself staring down an all too familiar opponent in round two: Wisconsin’s Trent Hillger.

Hemida won the duo’s last matchup to clinch third place in the Big Ten tournament, but in the third period Thursday, he was trailing 1-0 with riding time in Hillger’s favor. Hemida needed to score a takedown to send the match to overtime, but like during the four-match losing streak he suffered through earlier this season, the Terp just couldn’t convert.

Hillger won a 2-0 decision, ending Hemida’s quest for a national championship. The senior is still in contention for a second straight All-American finish.

“I was a little anxious getting on the mat,” Hemida said. “I’m really happy to take it match-by-match and trying to get my hand raised.”

Hemida’s tournament wasn’t supposed to start against Sweany. Buffalo’s Jake Gunning — the original No. 23 seed — dropped out of the tournament, causing every wrestler seeded below him to move up.

The change in opponent didn’t affect the Terp.

Hemida started the match with a takedown midway through the first period and took a 2-1 lead into the second.

After another takedown, Hemida entered the final frame with a 4-1 lead but a takedown near the boundary and a plethora of riding time lifted the Terp to a 7-1 opening round win.

Seconds after Hemida beat Sweany, No. 7 Hillger defeated No. 26 Ian Butterbrodt of Brown. That set up a rubber match between Hillger and Hemida, who split their first two matches of the season.

Hillger defeated Hemida 4-2 on Feb. 2, the start of a midseason tailspin that saw Maryland’s only All-American drop four consecutive matches.

When the two matched up again at the Big Ten tournament, Hemida got his revenge with a 3-2 win. That victory completed Hemida’s consolation run and secured him a 3rd-place finish among heavyweights.

Before concluding this season’s trilogy, the two stared each other down with a quarterfinal match awaiting the victor.

The first period was used as a feeling out session, but Hillger took control in the second. Hemida chose the down position, hoping for a quick one-point escape, but the Badger refused to give it up.

Hillger rode Hemida for the entire second period, locking down the riding time in his favor. After a quick escape by Hillger in the third, Hemida was down 2-0. Hemida delivered shot after shot but couldn’t latch onto a leg.

The 2-0 loss means that the Mamaroneck, New York, enters the consolation bracket, where he will battle for as high as third place.

After day one, Hemida only needs three more wins to become a two-time All-American. But if he suffers just one more defeat, he will be eliminated.

Even with a daunting road ahead of him, Hemida is still enjoying the ride.