Review: ‘The Shape of Water’ is wonderfully weird 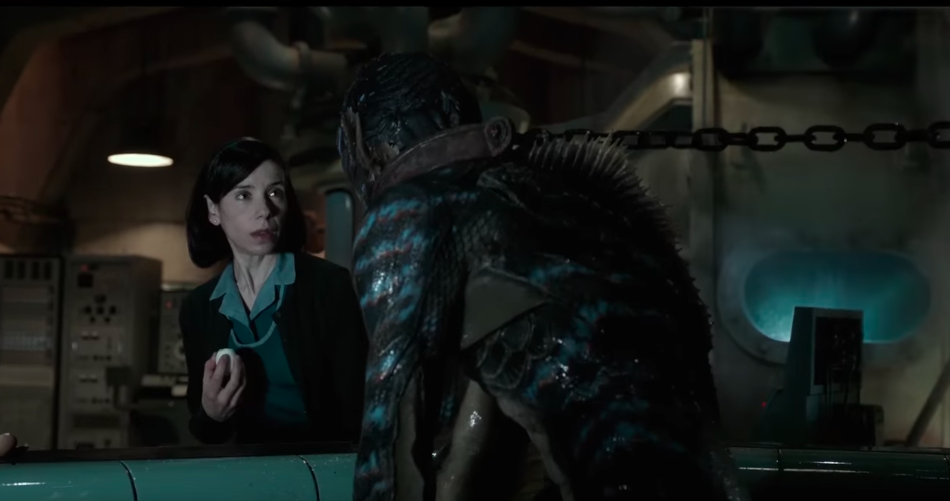 Like Tarantino and Burton, Guillermo del Toro is just one of those directors that you may not be a huge fan of, but you watch his work anyway because you want to see just how weird his films can get.

His newest film, The Shape of Water, is about a romance between a woman and a fish-man during the Cold War. Yes, you read that right. A human woman falls in love with a fish-man and vice versa *insert gasp*. The Shape of Water is a sexy, emotional and breathtakingly gorgeous work of art that shows humans and other beings may be more similar than we’d like to believe.

The first shot of the film is entirely underwater; an ordinary (but rather antique) apartment building and its belongings eerily floating as if stuck in dark green Jell-O. Elisa Esposito (Sally Hawkins), a woman rendered mute from an accident (details unknown), is our star. We see her daily routine, in which she times herself as she masturbates in the tub and boils eggs for breakfast for her neighbor, an artist named Giles (Richard Jenkins). She then goes off to work as a janitor alongside Zelda (Octavia Spencer) at the Occam Aerospace Research Center, and that’s where we meet the Asset, aka The Amphibian Man (Doug Jones).

del Toro’s main inspiration for The Shape of Water is Creature from the Black Lagoon. The comparison is evident when the Asset is portrayed as a malicious and unintelligent being by its tormentor, Colonel Richard Strickland (Michael Shannon) and his cohort, scientist Dr. Robert Hoffstetler (Michael Stuhlbarg). However, that’s where the comparison stops because soon, we see that the Asset is actually a benevolent, curious and intelligent (and extremely majestic) creature who strikes an unlikely friendship with Elisa.

The acting is superb. I’ve watched Sally Hawkins in Oscar-nominated Blue Jasmine, but The Shape of Water brings something out of her that I’ve never seen before. Perhaps it’s because Hawkins has to rely on her facial expressions and her body language to convey the timid but sweet Elisa, but this reliance brings a certain quiet strength about the character. Michael Shannon as the cruel Colonel is also a force to be reckoned with. The Colonel embodies the anxiety and greed of human society during the war-era, and Shannon — with his poker face and slight Southern twang — impresses and scares at the same time. And Doug Jones? Well, what else can you expect from Fauno, the Pale Man, Abe Sapien, and Silver Surfer? He KILLED it as the Asset.

At first, I felt like a parent, disapproving of Elisa’s budding relationship with the Asset (but deep down supporting it, duh), but very soon, I felt like the single best friend who lives vicariously through others’ relationships, wanting them to be together. It’s a strange combo: amphibious humanoid and human but, it’s so sweet. Elisa doesn’t feel like she’s lacking her voice when she’s with the Asset; he accepts her for what she is and vice versa. Besides, there’s just something really raw and sexy about their relationship. It’s this concept of creature/monster/beast with human that makes this couple even sexier than they should be because it feels wrong. You shouldn’t support it. Yet, you do. Trust me. You do, and it’s perfectly awesome.

The cinematography is stunning, as per usual by del Toro’s frequent collaborator, Dan Lausten. With the beginning underwater image and subsequent shots of the Asset, Elisa’s home, the streets of Baltimore, and the rest of 1960s America and its preppy inhabitants, we tread the border between fantasy and reality, a signature move of del Toro’s.

Besides the rather trite Human vs Other narrative, del Toro’s newest work, The Shape of Water, is a tour de force. It’s a controversial, gory and gorgeously sensuous romance, battle, drama, and tragedy all in one. It sucks you in its current, first caressing your skin, then tossing you in its waves and then finally placing you gently on the ground as the story ends. If I didn’t know any better, I might be the one in love with the Asset.