After slipups last week, Maryland gymnastics hopes to bounce back in Pink Invitational 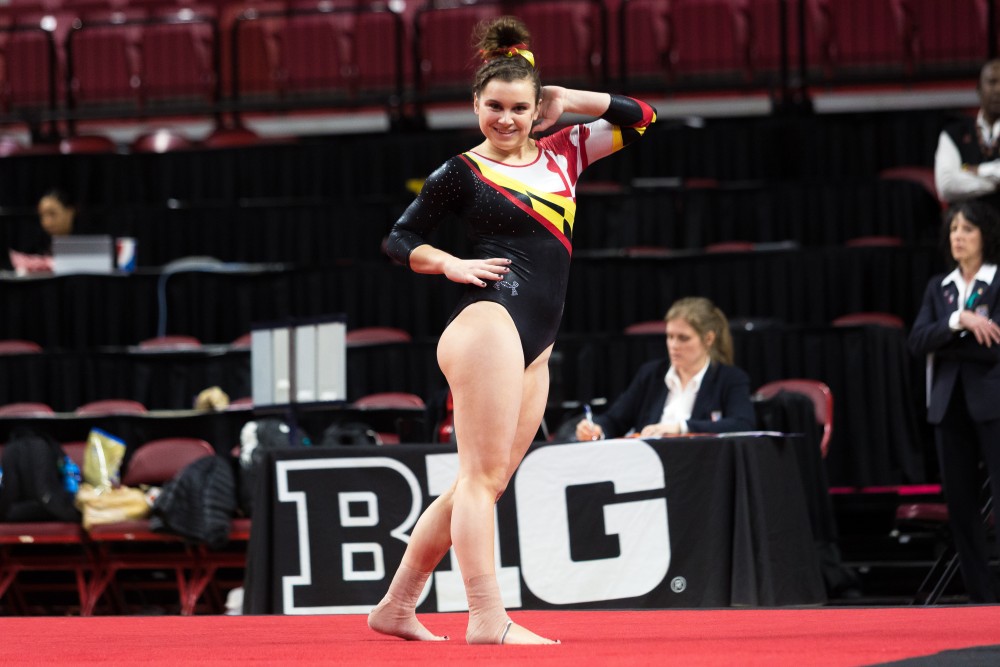 In their second-place finish against West Virginia and Pittsburgh on Sunday, no Maryland gymnast scored above a 9.8 on vault, leading to a 48.8 event score, their lowest of the night.

Coach Brett Nelligan said the Terps hope to minimize their deductions on vault and floor at the Pink Invitational in Philadelphia on Friday and improve their consistency in landings and sharpness.

The Pink Invitational was created to promote breast cancer awareness and to teach gymnasts of all ages the impact of the disease. The fundraising event is expected to welcome more than 3,000 gymnasts and 10,000 attendees, with all the profits going to breast cancer programs.

At the invitational, Maryland is looking to improve on its last performance when it goes up against Division II teams West Chester and Southern Connecticut.

“At the beginning of the season, coach was mainly telling us to get out there, have fun and hit your routine,” freshman Emilie LeBlanc said. “As we’ve been progressing throughout the season, his focus isn’t just to hit our routines. Now, we have to hit them precisely and consistently.”

LeBlanc and all-around star Audrey Barber agreed that the team needs to work primarily on vault landings, bar handstands and wobbles on beam.

“We should keep on putting up six for six, calm and confident routines,” Barber said. “We need to take it one skill at a time. That will help us be successful on Friday.”

Even though the team’s scores dipped on vault in Sunday’s meet, Nelligan is still happy with the Terps’ start to the season. Maryland notched the fourth-highest score in program history Feb. 11 despite relying almost exclusively on underclassmen.

“They continue to impress me, especially for such a young team,” Nelligan said. “Every week, they are growing, getting better, and becoming more confident in themselves.”