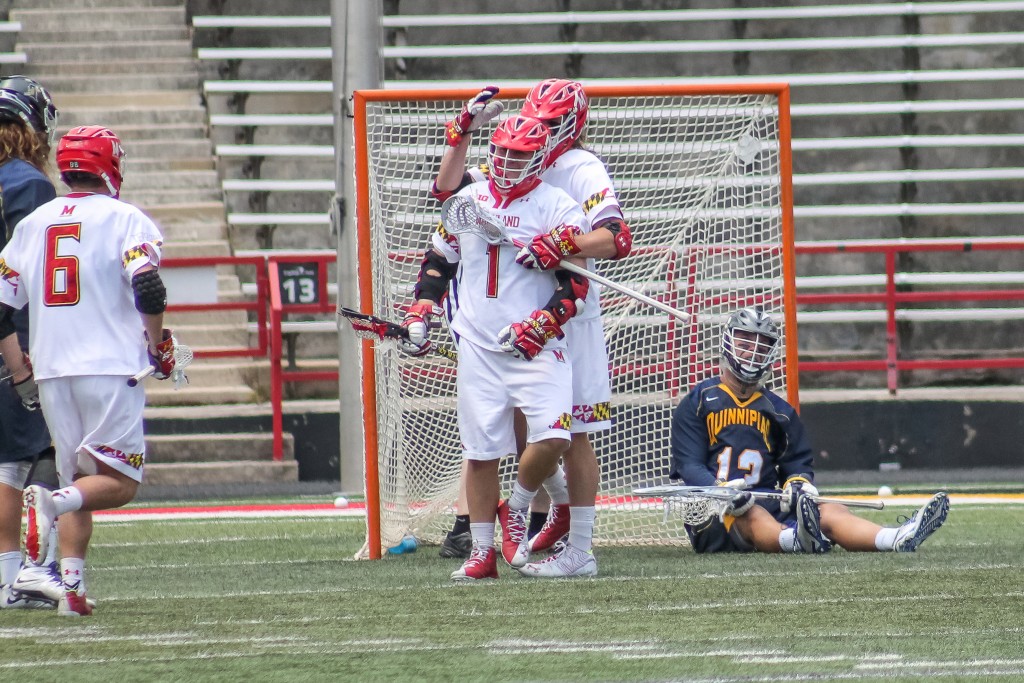 Maryland men’s lacrosse attackman Matt Rambo didn’t watch the ball hit the back of the net when he eclipsed the program’s all-time goals mark with an off-balanced first-quarter shot.

Instead, he lay on his back, facing the sky, as his teammates rushed to congratulate him for the record-breaking effort that sent him tumbling to the turf. But on the day he passed one of Maryland’s most coveted marks, his performance wasn’t the focus.

“The big theme for the game was [the faceoffs],” coach John Tillman said. “Austin was really on the whistle early, and then got a couple [quick faceoff wins]. Psychologically, I think that was really helpful for us.”

Baptiste entered the game with an NCAA-best .757 draw percentage. In his previous outing, he won 21-of-22 faceoffs against Notre Dame.

Henningsen, meanwhile, came in at a .472 clip and had lost the faceoff battle in seven of his previous eight matchups. Tillman said he would have been satisfied if the sophomore had taken just 40 percent of the draws in his showdown with Baptiste.

But on the first faceoff of the contest, Henningsen managed to knock the ball to long pole Matt Neufeldt, earning the Terps possession. He did the same to win the second. And while Baptiste controlled the third draw, Denver gave away possession with an errant pass 13 seconds later.

“We had the ball on the offensive end for a huge amount of time,” defender Tim Muller said. “So by the time it got back down to [the defense], we were pretty fresh.”

In the first half, Henningsen won 5-of-10 faceoffs, contributing to Maryland’s 5-3 advantage at the break. Combined with teammate Jon Garino, the Terps won 10-of-21 overall draws, marking the best performance against Baptiste this campaign.

That kept Baptiste from delivering the kind of offensive production that lifted the Pioneers throughout their season. After recording 12 goals and two assists entering the Final Four, he didn’t record a point.

Following the game, Denver coach Bill Tierney shook his head when asked about the faceoff battle before insinuating that illegal play in the X led to Henningsen and Garino’s surprise success. However, he didn’t provide a further explanation.

“I’ve been in enough of these to know to not comment when I have something negative to say,” Tierney commented. “So, I’ll have to pass on that one. Let’s just say it wasn’t — let’s move on.”

With the standout specialist neutralized, Maryland’s go-to attacking threats delivered at the other end. Its starting offensive trio, consisting of Rambo, Colin Heacock, and Dylan Maltz, combined for seven points.

Midfielder Connor Kelly, who leads the Terps in goals this year, added a hat trick.

In the fourth quarter, after Denver tied the game at eight, Kelly put Maryland ahead for good through his third conversion of the game, finding the back of the net with a shot that bounced in off the crossbar.

When time expired following a disallowed Pioneers finish with the clock winding down, the Terps rushed the field to mob goalkeeper Dan Morris, a level of jubilation they hadn’t displayed in their quarterfinals win over Albany.

“That game could have gone anybody’s way,” Tillman said. “[I’m] just happy to get two more days with our players. Obviously we have a huge challenge ahead of us, but we’re going to try to take the next couple days here to get prepared.”